The global app economy will be worth $6.3 trillion by 2021, up from $1.3 trillion last year, according to a new report this morning from app analytics firm App Annie. During that same time frame, the user base will almost double from 3.4 billion people using apps to 6.3 billion, while the time spent in apps will grow to 3.5 trillion hours in 2021, up from 1.6 trillion in 2016.

These figures represent more than just the revenue generated through app stores, the firm noted. It also took into account other forms of monetization, like in-app ads and mobile commerce. 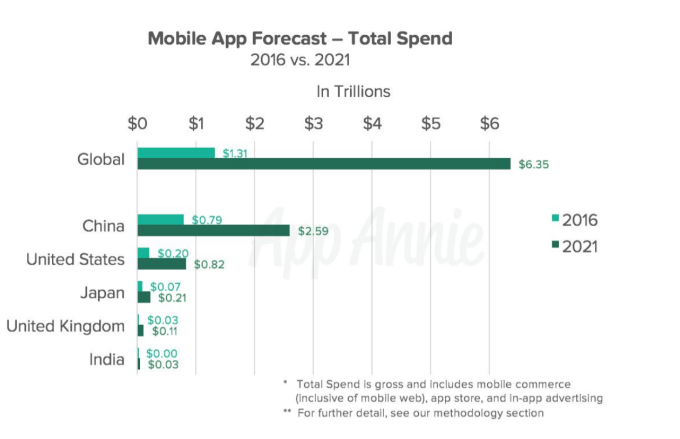 The report pegs the increases expected in the years to come to be especially impacted by the shift of physical transactions to mobile ones. App Annie noted in particular how Alibaba had recently announced that mobile accounted for 79 percent of the total transaction value generated by its retail marketplaces in China in fiscal year 2017, which was up 65 percent from the last fiscal year. 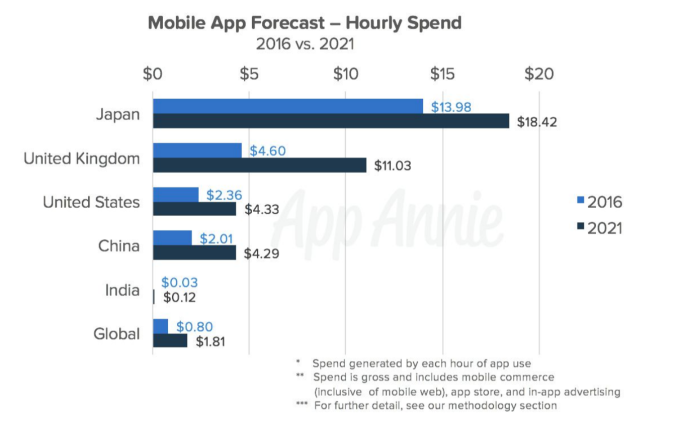 It also believes western markets will lag behind this shift, including consumer spending and ad spending’s move to mobile. This is because, here, we’re still wrapped up in legacy systems for things like banking, payment transfers, food purchases, and because a lot of the wealth is still concentrated in an older population, who is slower to move to mobile.

Developing markets aren’t as bogged down by these legacy systems, and are building infrastructure designed for mobile, the firm explained.

Mobile commerce was cited as the single largest driver of growth for the app economy, growing from $344 per user to $946 by 2021. Asia will grow the quickest, reaching $3.2 trillion in 2021, followed by the Americas hitting $1.7 trillion, then EMEA (Europe, Middle East, and Africa) which will reach $1.0 trillion. 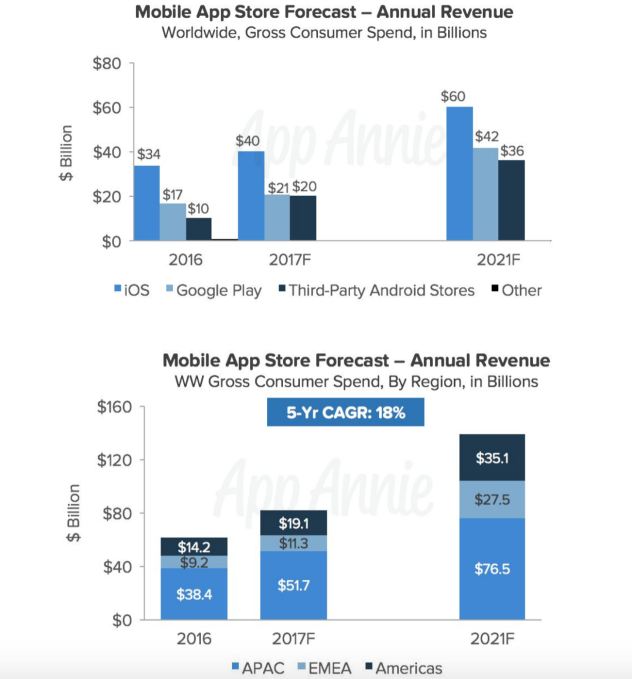 Consumer spend across app stores will grow as well – rising 18 percent to reach $139 billion by 2021. During this time, the iOS App Store will remain the largest single store, growing to over $60 billion; however, Google Play combined with third-party Android marketplaces is expected to overtake the iOS App Store this year, largely thanks to China.

Editor’s note: An earlier version of this story incorrectly stated the value of last year’s global app economy as $1.3 billion. The correct figure is $1.3 trillion.