Facebook today announced a series of improvements for its Safety Check feature – the service that allows Facebook users to communicate about their safety to friends and family during a crisis. Most notably, people will now have the option to start fundraisers from within Safety Check, in order to immediately translate concern for victims of a crisis or natural disaster into specific actions. Additionally, the service is being expanded to include more information about a crisis and the option to leave a personal note along with their Safety Check News Feed story.

Plus, the Community Help feature, launched earlier this year on mobile as a way for people to find and give help like food, shelter and transportation, is now making its way to the desktop. 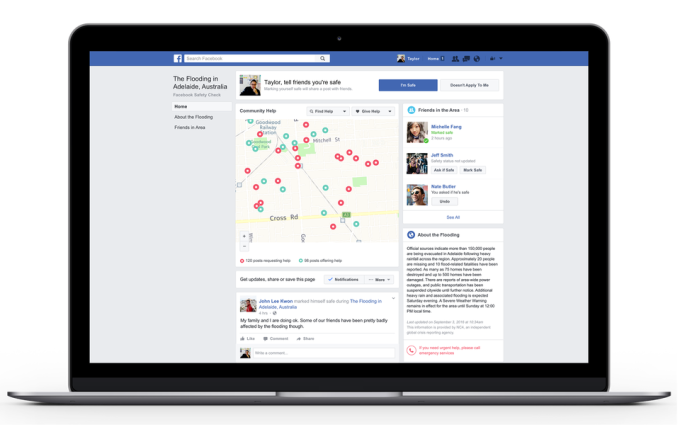 Facebook has been steadily expanding access to fundraisers over the course of the past several months, so it makes sense that it would now bring this service to Safety Check. In March, the company introduced the ability for people to create personal fundraisers – a move that put the feature in direct competition with GoFundMe. Facebook’s personal fundraising service exited beta in May, while also adding support for raising funds for sports teams and communities.

According to Facebook, fundraisers’ integration into Safety Check will allow people to both create and donate to charitable and personal causes to help those in need, in the wake of a crisis. That means those who aren’t in the affected area can contribute.

However, the feature isn’t immediately available. It’s initially rolling out in the “coming weeks” here in the U.S., the company says. In other words, it won’t be an option to help the currently active Safety Check for those in London affected by the large high-rise fire at Grenfell Tower, which killed at least six (as of the time of writing) and injured 74.

Fundraisers are a potentially big business for Facebook, if it’s able to shift more of the activity taking place on GoFundMe over to its own social network – a strong possibility, as it’s undercutting GoFundMe’s fees. Facebook’s personal fundraisers have a 6.9 percent + $.30 fee that goes to payment processing, fundraiser vetting, and security and fraud protection. GoFundMe takes 7.9 percent + $.30 for personal or charity campaigns, by comparison. (Facebook nonprofit fundraisers, meanwhile, have fees of 5 percent to 5.75 percent.)

By connecting fundraisers to large-scale events through Safety Check, Facebook fundraisers will gain even more attention and see increased use going forward.

Already, fundraising around crises has been taking place on Facebook. For example, after the Manchester attack in May, people donated over $450,000 to help the community via Facebook. 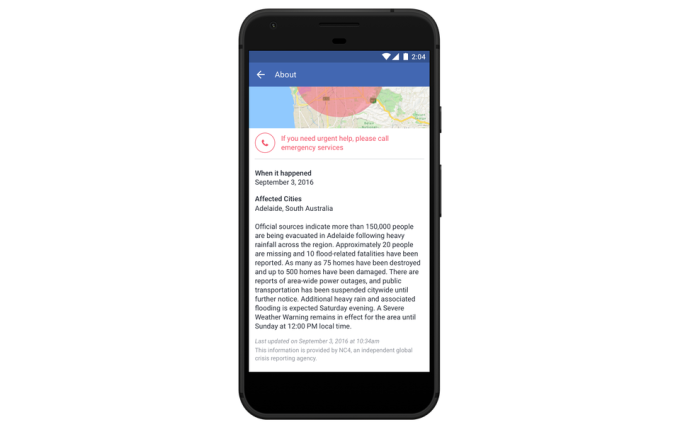 This will be aided by the rollout of crisis descriptions, also newly announced today. These descriptions will help people better understand the situation which may then further inspire them to help. Facebook says it’s working with NC4, a trusted third-party global crisis reporting agency, in order to add descriptions about the crisis to Safety Check notifications.

Finally, Safety Check will also now become a way for people to share their own stories with friends and family, rather than the simple utility for marking themselves safe, as in the past.

Starting now, people can choose to share additional information through a personal note when they use the Safety Check tool. This note, along with their Safety Check status, is shared automatically to the News Feed as people mark themselves Safe.

This goes to address one of the issues with Safety Check – that it sometimes caused loved ones’ fear, rather than alleviating their concerns. Facebook product designer Preethi Chenan explained the problem, noting that simply by marking themselves “safe,” some people had worried their families and friends who then thought they had been more directly affected by the crisis. Now users can add a note, to add reassurance that they are in no way in danger. 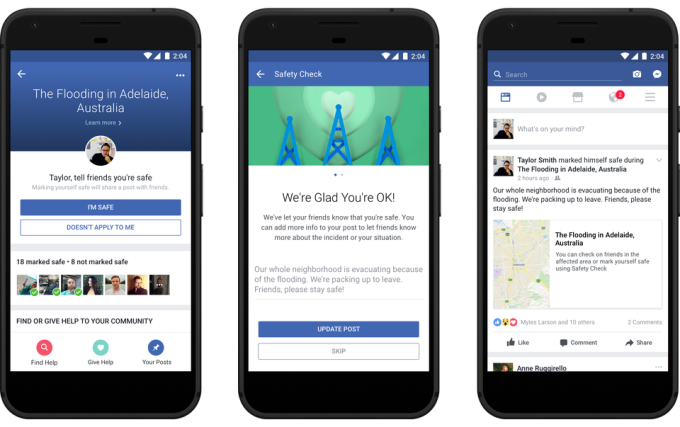 Facebook says Safety Check has been activated over 600 times over the course of the past two years. That number will likely continue to climb since last summer’s introduction of the community-activated Safety Check feature. The company said then it was working to bring the feature to more events, by automating a way for the network to trigger Safety Check when a certain number of people begin posting to Facebook about a crisis that can be verified by a third-party source.

Fundraisers and desktop support for Community Help are arriving in the weeks ahead. Personal notes and crisis descriptions for Safety Check are rolling out now.