3D printing startup Formlabs is using its Digital Factory conference today to make its two biggest announcements since launching the Form 1 on Kickstarter half a decade back. Both are pretty logical extensions for a company that’s always straddled the line between desktop and industrial 3D printing, by offering pro-level high-res printing in a portable/affordable form factor.

According to CEO Max Lobovsky, around 95-percent of Formlabs’ existing customers are professional, with a small minority of hobbyists taking the plunge. These next steps for the company make a push into direct manufacturing and the embrace of a 3D printing technology long out of reach for most startups.

While the Form 1 and 2 printers were developed with prototyping in mind, the devices have already begun making their way into the still-young world of 3D printing for manufacturing. That’s mostly taken the form of biomedical devices – things like dental implants that rely on high degrees of customization. Founder and CEO Max Lobosvky estimates that some five-million people around the globe have used products created on a 3D printer, with companies like Invisalign dental making up the biggest chunk of that market share

It’s not mass manufacturing, exactly, but does represent a direct line from the 3D printer to the consumer. And the new Form Cell marks the beginning of scalability for Formlabs’ desktop offering. The principle of the system is a lot like Stratasys’ newly unveiled Continuous Build 3D Demonstrator in that it’s essentially a bunch of 3D printers networked into a single system. A sort of wall of 3D printers. But where Stratasys’ solution requires companies to start from scratch, the new Formlabs offering simply slots in existing Form 2 printers.

Form Cell is an array of up to five connected Form 2s, plus the company’s new Wash and Cure systems, which help put the finishing touches on the prints by dunking them in an alcohol solution for cleaning and zapping then with a little extra light to complete the curing process. A robot arm attached to the rig moves the prints from one station to the next, as seen in the above video. Kind of a self-continued micro-factory of sorts.

The whole process can be controlled remotely, and the system can be operated as “lights out manufacturing,” meaning no one has to be present while the machine does its thing. It’s a stupidly simple solution, really – just plug a bunch of existing machines into a new remote-controlled framework. That kind of modular solution is a cost cutting measure. It won’t be cheap, but with a combined cost of around $20,000 for the five printers, and the remainder of the system running “in the low tens of thousands of dollars,” according to Lobovsky, that’s still a fraction of the cost most of these automated systems will run. 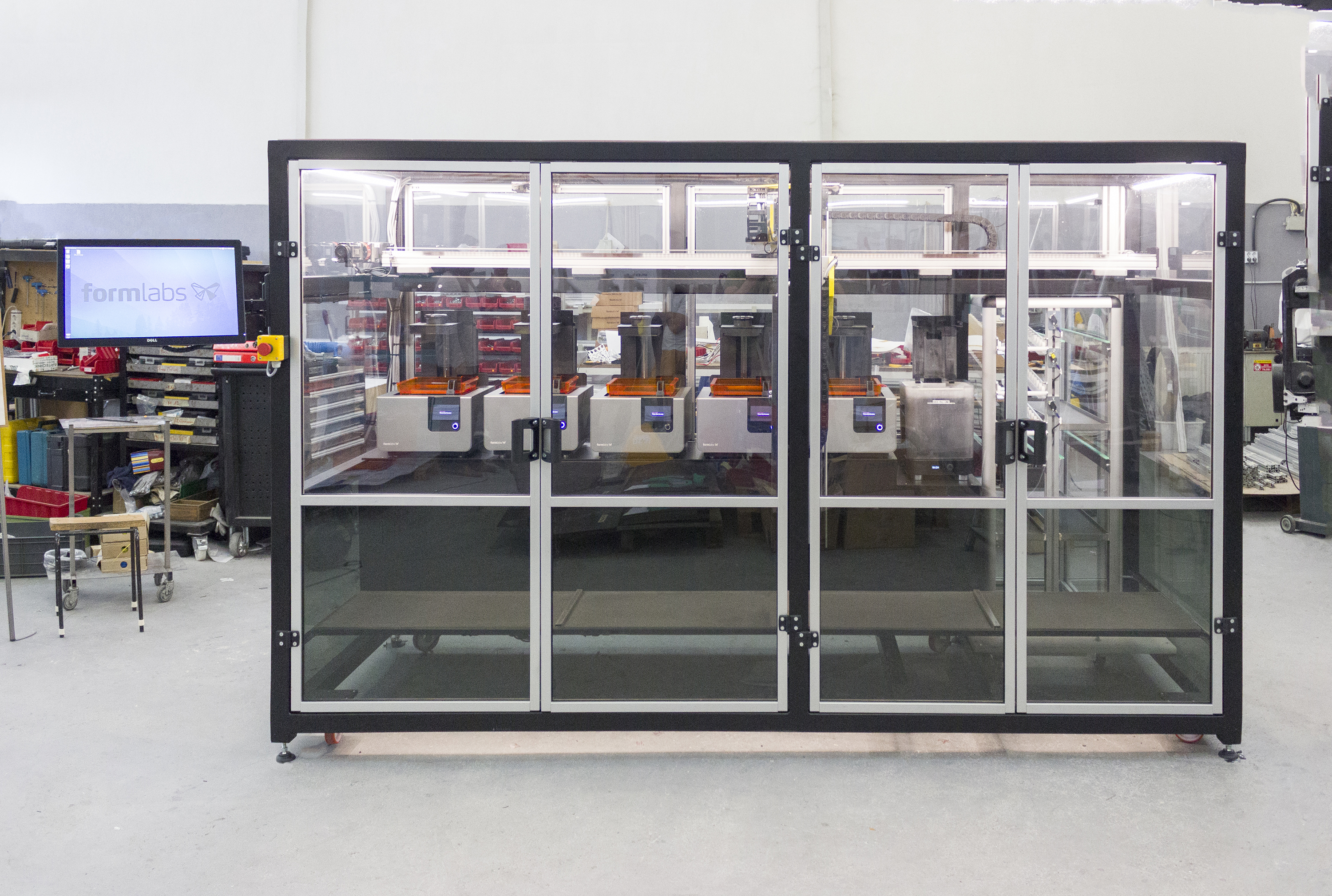 New Balance will be one of the first companies to take advance of the new small scale manufacturing. Starting next year, the athletic shoe maker will be using Formlabs’ system to create custom 3D printed footwear, similar to what Adidas has been developing with Carbon printers. It’s a step beyond the current biomedical applications for 3D printing, but one that still benefits from customization.

Like all of the news you’ll hear around 3D printing for manufacturing over the next couple of years, Form Cell is just a toe dip. But the company has no problem managing expectations. It’s one of the elements that helped it maintain steady growth under the radar as the competition happily played into the 3D printing hype bubble that was at its height when Formlabs first hit the scene.

“Investors, press, everyone was obsessed with the mass consumer thing,” says Lobovsky. “If there’s one area we’ve lost to MakerBot and 3D Systems, it’s in terms of press. Now everyone is talking about mass production. ‘We’re going to produce millions of parts.’ But it’s not going to be random plastic bits in a car. It’s where 3D printing has a unique edge. It is going impact people, it just might be in slightly creepy [i.e. dental drilling] applications.”

Formlabs has made its name focusing on current professional applications for its technologies, rather than swinging for the fences with the promise of ushering in an era of 3D printers in every home. And the play has been a successful one for the Boston-based startup. The company has grown to 270 employees and recently opened offices in Berlin.

Lobovsky tells me that there are now 25,000 Formlabs printers out in the world. The company estimates that it’s currently shipping more professional 3D printers than all other companies combined, thanks to its ability to offer up pro-level prints at the fraction of the price of industrial machines. So the total numbers are there, even if the company isn’t making as much money per machine. 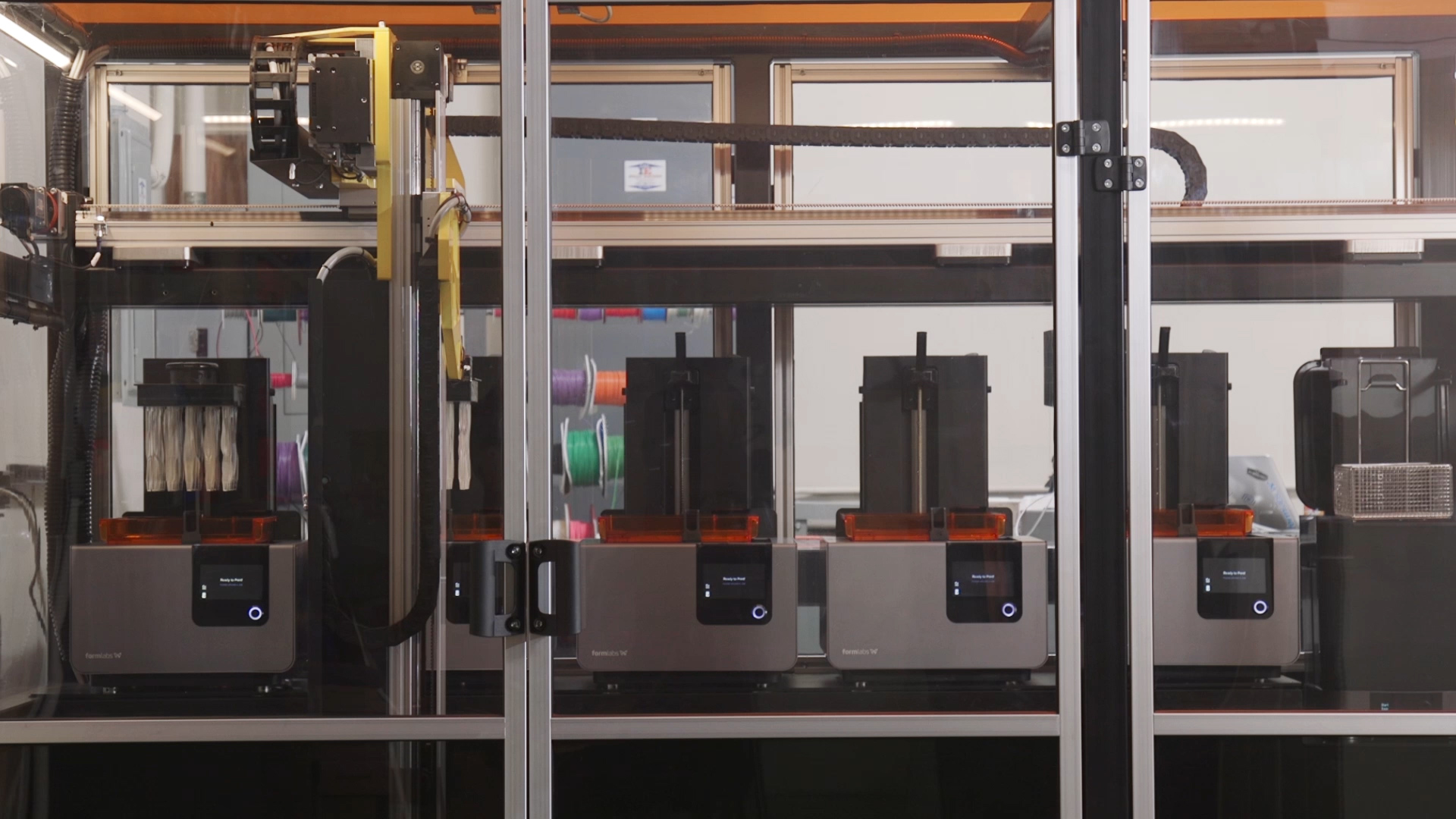 These aren’t mainstream consumer electronics numbers by any stretch of the imagination, but they’re quite strong for the space, and a rare bright spot in a 3D printing industry that currently feels a bit aimless. The company has had particular success among hardware startups. A Wired profile of Andy Rubin’s Essential from last week prominently featured one of its printers. Formlabs is content to be a company behind the company.

And it has similarly strong, but realistically modest projections for its other big announcement. The Fuse 1 aims to do for SLS (selective laser sintering) printing what the Form 1 did for SLA, delivering a prohibitively expensive 3D printing technology at a fraction of the size and cost of what is currently available.

The new printer is larger and pricier than the Form systems, starting at $9,999, but FormLabs estimates that the system is around 20x less expensive than the current lowest price SLS machines, and unlike the competition, it’s not the size of an air hockey table. The technology is superficially similar to the SLA (what you’ll find on the Form series), only instead of curing liquid resin with UV light, SLS sinters powder material, melding it into a solid object, layer by layer.

SLS is able to use a broader range of materials with differing levels of strength, flexibility and stiffness. The most geometrically complex prints you see from on-demand market place services like Shapeways are often created on SLS machines. During our conversation, Lobosvsky pulls out a bike pedal printed on the machine that a Formlabs employee has been using for a year on the bike he uses to commute into work. Not something you’d want to try with other desktop printers. 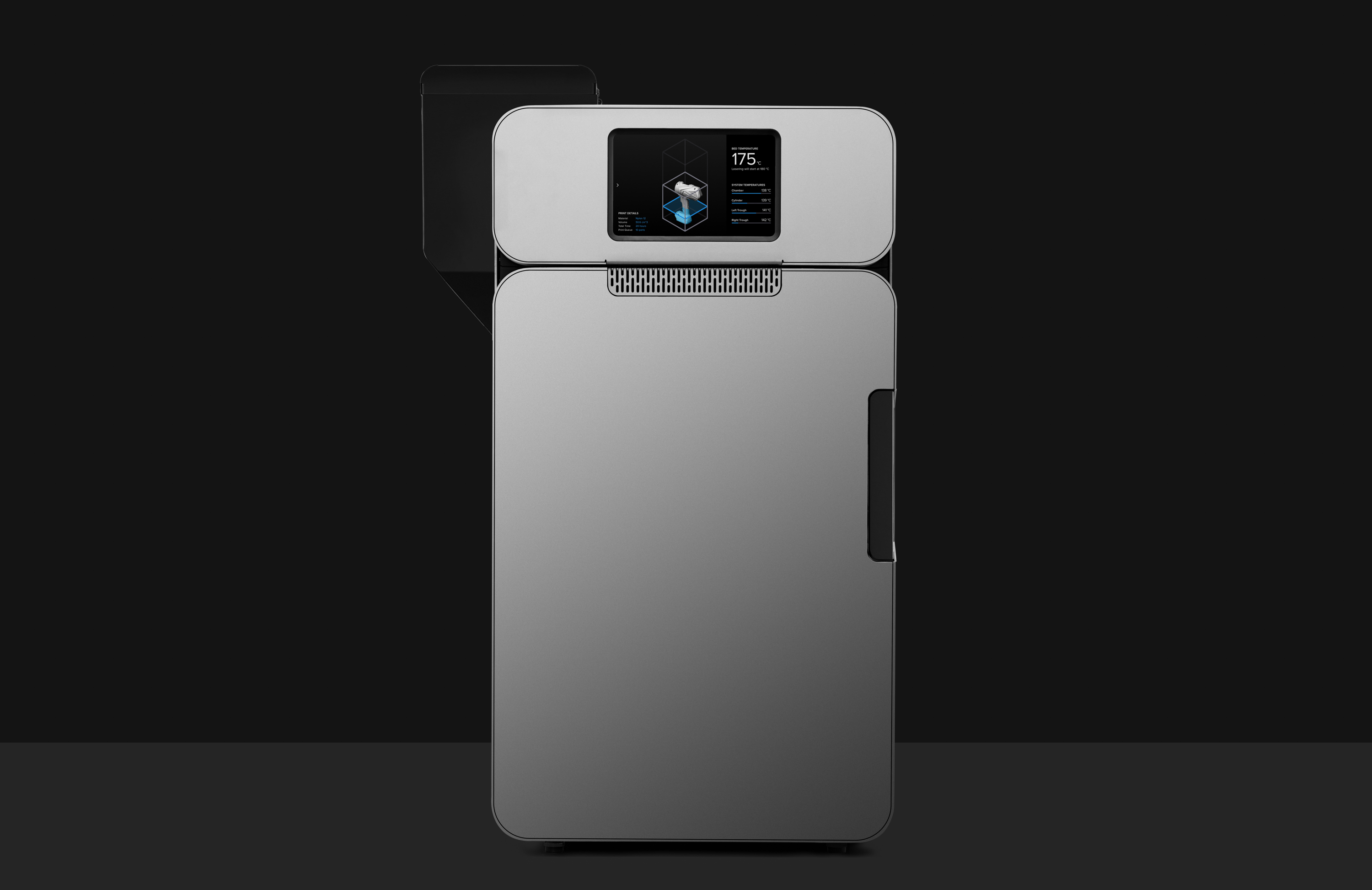 But the CEO acknowledges that the Fuse 1’s appeal, while strong in certain circles, will likely be more limited that its Form line, owing, in part, to pricing.

“It won’t be as high volume as the Form2, for sure,” he explains. “But we think we’re going to do the same thing we did with SLA, where we’re going to sell more of these than all of the other competitor combined, because today SLS is less than 1,000 a year, combined. These are the rarest, highest of end of the printers.”