Apple’s Kevin Lynch came on stage this morning at Apple’s Worldwide Developer Conference to introduce the next version of Apple’s smartwatch software, watchOS 4. The new platform introduces a number of new features, including new watchfaces – like one that integrates Siri support – and other fitness related updates, like personalized challenges, updated Workout and Activity apps, and more.

There were a number of new watchfaces introduced this morning, including those featuring Disney characters from “Toy Story,” and a trippy kaleidoscope one, but the most intriguing was the watchface that integrated Siri on your smartwatch’s home screen.

This face will display a stream of information provided by Siri and augmented by the assistant’s machine learning capabilities. That means your Siri-powered updates on your watch will update based on the time of day. For example, in the morning it might show your commute time to work or school, or show your meetings you have planned for the day. 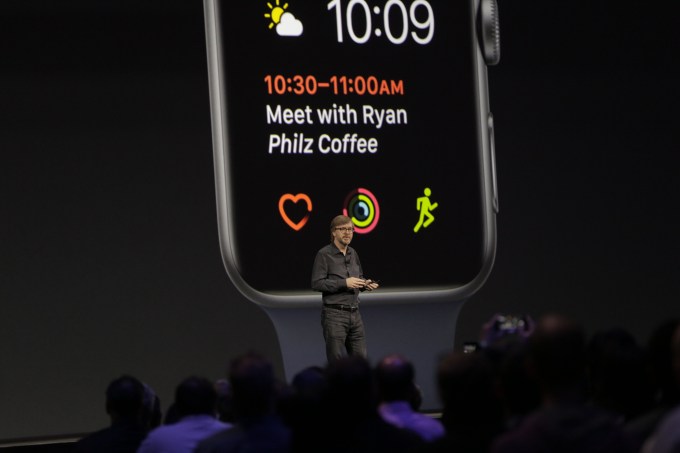 The watchface can also show your smart home controls, boarding passes, the sunset time, and other items, including even suggested news stories in the Siri interface.

The Activity app has also gotten a minor update with watchOS 4. Now, when you close one of your Activity rings, there’s an animation with some sparkles that gives it more of an effect. It will also now tell you how much more work you need to do in order to complete a ring – e.g. “15 minutes of running.”

The Apple Watch update will also make the device a better virtual coach, if that’s how you use it. For instance, watchOS 4 introduces personalized, monthly workout challenges that prompt you to surpass your prior goals with new awards you can earn by increasing your activity.

The Workout app has a new interface too, and an easier Quick Start feature. There are new modes, like a swimming-centric mode with automatic sets and one for high-intensity, back-to-back workouts. When switching between workouts, you can now tap a plus button to add multiple workouts to that session.

Another fun feature is a way to configure your watch to start playing your desired workout playlist automatically whenever you begin your workout. This is part of an improved Apple Music experience on the watch, which also includes a new user interface, a better AirPods experience, better syncing of multiple playlists, and more.

And there’s a new flashlight mode in the Control Center that also doubles as an emergency flasher.

However, some of the less sexy but more exciting features involve things that are arriving under the hood. Native core bluetooth support, for example, is coming to Apple Watch. That means the watch will be able to better support hardware like glucose sensors and other real-time accessories, like a smart tennis rackets, for instance.

Plus, WatchOS 4 introduces a mode called “Gym Connect,” which allows you to sync directly with gym equipment like treadmills and ellipticals. This works by pairing the watch with an NFC sensor on the equipment itself from partners including Life Fitness, Cybex, Schwinn, Startrac, and StairMaster.

WatchOS 4 will ship in the fall as a free update. It’s arriving for developers today.