Blue Apron, which delivers ingredients to cook meals in your home and was among the companies whispered to go public this year, has now filed to go public.

Amidst an array of enterprise companies that have jumped on the IPO bandwagon following Snap’s successful IPO (aside from its more recent whiff of an earnings report), Blue Apron appears to be the next major consumer IPO. That’s important, because it continues the tone that both enterprise and consumer companies see an opportunity to go public, which may signal additional activity as we go further into the year.

The company said the average order value in the first quarter this year was $57.23, which was a decline from the first quarter last year when it said the average order was $59.28. That might not come as a huge surprise as the company looks to continue to grow its customer base, which means it has to appeal to consumers that might be more price sensitive — even if it’s bringing them in at a trickle. It also has to improve its logistics and operations, which can drive the cost of those orders down.

But that, too, shouldn’t come as a big surprise: As Blue Apron looks to expand beyond its metropolitan home bases like major cities, it’s going to have to make a much broader push for awareness among the more typical consumer. Not surprisingly, a lot of this spend is coming in the form of offline media. 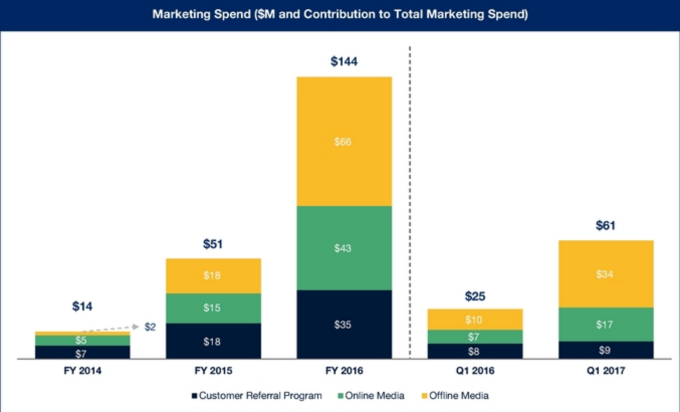 As a food-driven business, however, Blue Apron faces some interesting challenges that it’s laid out in its risk factors. Here’s one of the ones that stands out: food safety and food-borne illnesses.

“Unexpected side effects, illness, injury or death related to allergens, food-borne illnesses or other food safety incidents (including food tampering or contamination) caused by products we sell, or involving suppliers that supply us with ingredients and other products, could result in the discontinuance of sales of these products or our relationships with such suppliers, or otherwise result in increased operating costs or harm to our reputation,” The company said in its filing. “Shipment of adulterated products, even if inadvertent, can result in criminal or civil liability.”

Blue Apron also says that variability in food costs — and generally changes in the macroeconomic environment and consumer spending — can also have a big impact on its business. That’s not too surprising as Blue Apron, which is often seen as a tech company, has to deal with a complex chain of logistics and moving parts that sources supplies from many different locations and businesses. Blue Apron has to not only build out the sourcing network, but the technology to ensure that everything runs smoothly (and doesn’t break). 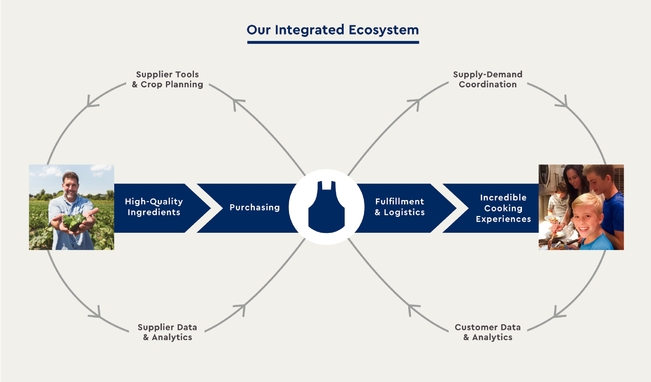 Really, this whole section on risk factors for the IPO — laid out for potential investors and often quite boilerplate — has a lot of details that you won’t often find in the typical consumer IPO. Here are a few of the other interesting risk factors:

Unsurprisingly, Blue Apron looks to target a younger audience. Users between the ages of 25 and 44 years old make up more than half of the company’s business, which might not seem too surprising for observers of the meal kit market (and, in general, on-demand food industry). The company says it’s delivered 159 million meals nationwide. 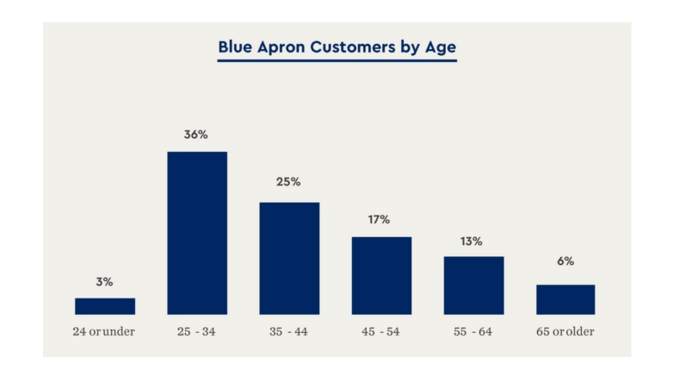 As time goes on, we’ll get a better sense of how much money Blue Apron will be raising — and also how valuable the company thinks it is as it gets closer to pricing its IPO. Now that it’s filed, we should expect Blue Apron to make its debut in the coming months, which will give us a sniff test on the whole meal kit market (and potentially on-demand meals as a whole).