If you’re about to replace your roof, Tesla has you covered, but roofs have a long life span, and besides, not all of us have the luxury/misery of having a roof to replace in the first place. Most of us have walls with glass in them, however, and that’s the window of opportunity SolarGaps is reaching for, with a Kickstarter campaign for its solar panel window blinds.

At first glimpse, this sounds like a brilliant idea. Per square footage, we probably have more window glass than roof space in the world; why not leverage it? The slick Kickstarter campaign shows the company’s vision, which is undoubtedly ambitious. SolarGaps integrates with a smartphone app, Google Home, Amazon Echo and the Nest Thermostat. It can either feed electricity back into the grid or into a battery system like the Tesla Powerwall. On top of all that, the campaign claims the product can be custom-made for the same cost as (non-solar) motorized blinds.

In theory, the product is sound: On a south-facing wall, the most direct sunlight you can expect (averaged through the year) is about 10 hours per day. For a 10-square-foot panel (which the company quotes at $385), the company indicates around 1.5Kwh per day on average, or 500 kWh per year. At current prices, that’s power generation of around $88 per year, assuming it’s sunny every day. At a cost of $385, it means it’ll take about 4-6 years to earn the SolarGaps back, assuming all the estimates are correct, and you live in a place that has perfect sunshine year around.

Right off the bat, I spot a couple of challenges. Ask a 5-year-old to point at a window and they’ll point sideways. Ask them where the sun is, and they’ll point straight above. Which means that the sides of walls are already at a disadvantage to roof-mounted panels. Of course, the panels do live on slats, so it’s possible to point the panels toward the sun, but still.

The SolarGaps team sent me a small, approximately 3.2-foot panel to try out. The build quality looks solid, and when you think of it as a set of blinds to keep the sun out, it works great. However, when trying to measure the company’s stated performance, I fell short; the panel wasn’t delivering even close to what I ought to be measuring. It doesn’t help that the panel I was sent had a 220V to 110V converter, and that the DC-DC converter box I was supplied for testing is a lot less efficient than what the company is planning to ship. I questioned the wisdom of sending a review sample to a journalist with so many bottlenecks that it’s hard to evaluate whether or not it’s working properly, and received a photo of the company’s testing setup in response. 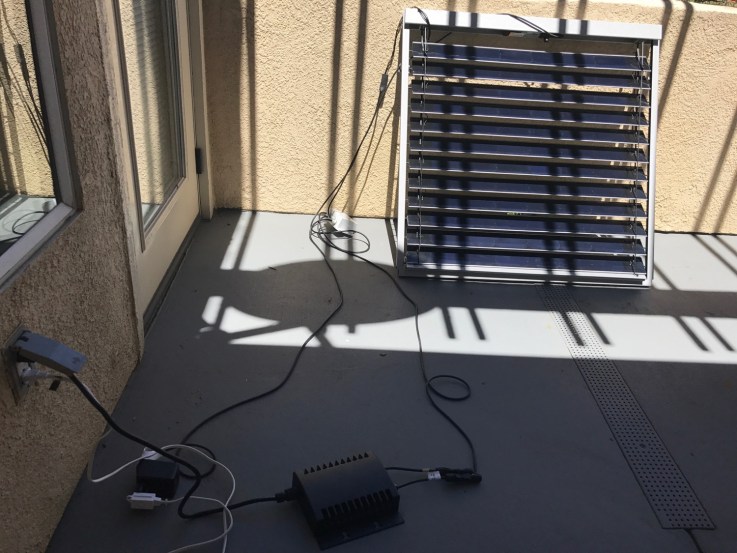 You’ll probably have spotted that the panel is balanced at a wall at an angle, outside. Which is cool for prototyping, of course, but also highlights the challenge mentioned above: Walls and windows tend to be vertical, without the luxury of angling the panel.

“To get best results your SolarGaps should be facing the sun and not under any shade, and you should rotate blinds using our application to get the best results,” says SolarGaps’ CEO Yevgen Erik. On the other hand, he also points out that “SolarGaps provides active window shading. This will help reduce energy wasted on AC by up to 40% and your payback period may just be 3 years or less depending on how frequently you are using AC. We can reduce this and try to help solve climate change.”

SolarGaps also suggests that they’ve been able to improve the efficiency of its product by 20 percent with software updates. They suggest further optimizations will be possible.

Ultimately, I think that SolarGaps is a good solution for areas that suffer from brutal heat, high air-conditioning bills and consistent sunshine. Wearing my business hat, though — on the company’s behalf, I worry about how small that makes its potential target market. Having said that, with 14 days to go, 231 people believe in the product to the tune of about $60,000, comfortably beating SolarGaps’ $50,000 goal on Kickstarter, so perhaps they’re seeing an opportunity that’s missed on me.