Robot arms have come a long way since the 1960’s when George C. Devol and Joseph Engelberger created the earliest industrial models. Those had two-finger grippers that, in retrospect, look fit to pluck a rubber ducky out of a bin in a carnival game, but nothing too sophisticated.

By now, robots in factories and warehouses can adjust their grip like human hands, or use suction and pliable materials to move objects wherever they need to go. Problems arise, however, when objects are porous, tiny, or need to be placed with great precision, as with materials handling in textiles, food, automotive and electronics manufacturing.

A startup called Grabit Inc., based in Sunnyvale, Calif., gets around problems with robot dexterity and grip by employing “electroadhesion” to move different materials. Yes, that’s the force that lifts strands of your hair away from your scalp when you rub a balloon on your head. 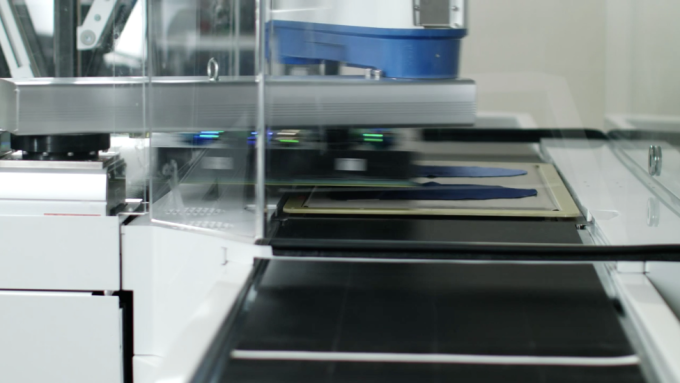 The Stackit robot, made by Grabit Inc., layers textiles together using electroadhesion.

Electroadhesion, and machine learning, allow Grabit’s Stackit robot to layer textiles on top of each other, including leathers, meshes, and composite fibers, thereby speeding the process of shoe-making or making a pair of jeans in a factory. Its other robots, the Meterit and the Conveyit, handle everything from fragile eggs to much heavier 50 lb. boxes, or even automotive glass, in factories and fulfillment centers.

According to Grabit board member Jim Kim, a founder of Formation 8 and general partner with Builders, the industrial robotics startup is now generating meaningful revenue and recently locked in two new customers, one in apparel and the other in logistics. The investor, and Grabit, declined to name those customers. However, the company is already a strategic partner of Nike Inc.

Originally, Grabit licensed its core technology and spun out from SRI International. The startup has also quietly raised $25 million in venture funding to-date, including from huge manufacturers and funds that don’t shy away from hardware. Nike, Inc., Draper Nexus Ventures and Flex Lab IX (the early-stage investment arm of Flex) were all early backers of Grabit. They were joined by later investors: Formation 8, Danhua Capital, Samsung, Brother Industries, ABB, Shanghai Electric, NTT Docomo and the Esquel Group.