Searching for art and artists on Google has just been improved. Today, Google announced it’s integrating the work done by the Google Arts & Culture team into its Google search results and Maps, allowing web users to better experience the art they seek. This includes, in some cases, being able to view high-resolution imagery of the artwork in question, see it hanging on the wall in a museum, as well as being able to browse through a full collection of the artist’s works. Or, in Google Maps, it means being able to take virtual tours of museums and reading annotations about the art in question.

These features were developed by the Arts & Culture team, which already has its own art-browsing app with included 360-degree virtual tours and even a “Shazam for art” feature, among other things. Google had also previously unveiled its gigapixel art camera, which captures art close up so web users can view paintings down to the brushstrokes.

Now, the results of those prior efforts are being made more broadly available, through Google search and Maps integrations.

For example, Google explains in a blog post announcing the changes, if you search for an artist like Gustav Klimt, you’ll be able to scroll through the museums where his work is located, view a collection of his works, and even zoom in on individual pieces.

In addition, Google has updated Maps’ Street View with museum guides on desktop and mobile. This allows you to walk through museum’s rooms via Google Maps, and read helpful annotations next to each piece. These will also be linked to page with more information about the art, as provided by museums around the world. Here, you can also zoom in on the works, when supported. 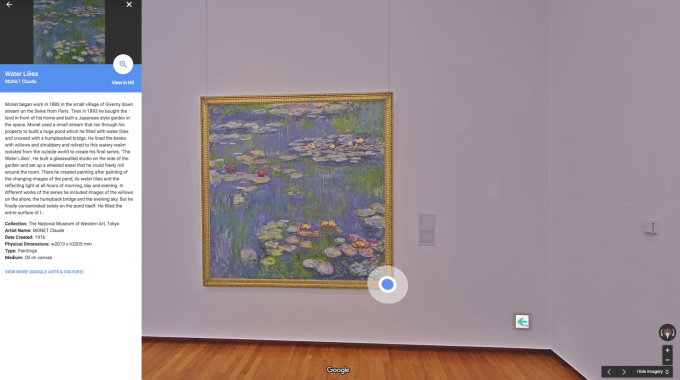 This feature is only available in the museums that participated, allowing Google to scan their walls. However, Google says it was able to scan over 15,000 works, and it then its visual recognition software to identify and categorize the works.

The company tells us there are more than 440 museums around the world participating in the Street View feature at launch. Some examples include Rijksmuseum in the Netherlands, Dulwich Picture Gallery in the UK and the J. Paul Getty Museum in the U.S.

Google said it rolled out these upgrades, as it today sees over 500 million art-related searches per month. The search integrations should be rolling out now, while Maps will work only on the desktop and on mobile via the Chrome browser.