Productivity app maker Readdle is rolling out a new feature across its line of iOS applications that takes advantage of the iPad’s support for split screen viewing to make it easier to move files between apps. The move could encourage current Readdle customers to buy the software maker’s larger suite of apps in order to take advantage of the new functionality.

Split view is a feature available on select iPads, including the iPad Air 2, iPad mini 4, and iPad Pro and later devices. It allows for a split-paned experience, making iPads work more like a traditional computer where you’re able to move between different windows, instead of remaining locked inside one app at a time.

Readdle’s support for drag-and-drop in split screen mode will work its mobile scanning app, Scanner Pro; PDF reader and editor PDF Expert; email app Spark; and file manager Documents. The latter is also getting an upgrade designed to make the latest version, Documents 6, more like a Finder for iOS devices.

The company is one of the first to fully take advantage of split screen multi-tasking on iPad for work productivity, with this release.

For example, you could drag a file you just scanned from Scanner Pro over to Spark, where it would become an email attachment, or copy it over to another app, like PDF Expert. Or you could pull in an email attachment from Spark over to PDF Expert where you could edit the file before sending it back. You could also grab multiple files from Documents, then drag them over the Spark to email them to recipients.

Readdle is able to make its support for split screen compelling because it has the ecosystem to support it. The company’s apps have been downloaded over 65 million times, and have millions of monthly active users. 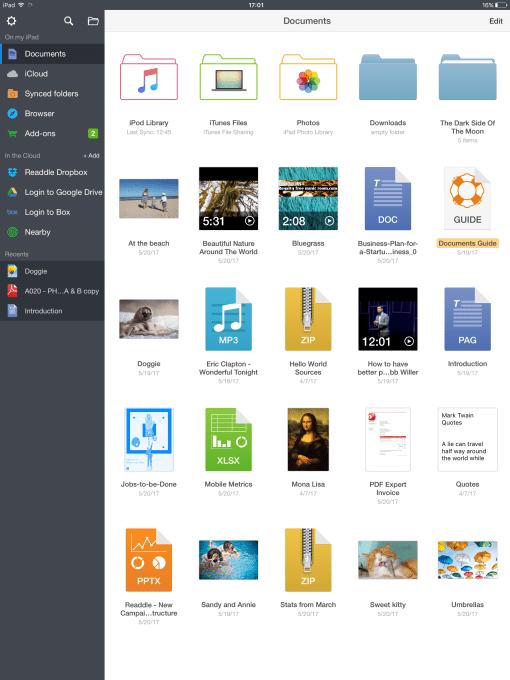 Today’s developers often struggle to figure out how to upsell existing customers by encouraging them to download the company’s other apps, but this drag-and-drop feature makes a good case for iPad productivity users as to why to buy into Readdle’s whole ecosystem.

However, it’s possible that with a new release of iOS, Apple will offer a new API that requires developers to support drag and drop in their apps, by specifying what files can be dragged out and what file types their apps receive. This would enable drag and drop to work across iPad, and make for a more robust computing experience in general – something that could better rival Microsoft’s Surface.

If this were to roll out, it would limit the appeal of Readdle’s apps as files could be moved between any apps on the device. But until Apple implements such a thing, Readdle lets you preview what that experience would be like.