Microsoft’s live-streaming service Beam, which the company acquired last year shortly after it emerged as the winner of the TechCrunch Disrupt Startup Battlefield, is today getting a new name: Mixer. The name is meant to express the way the service brings people together, the team explains, but it’s not the only change rolling out today, as it turns out. Mixer is also launching new features including co-streaming, a mobile broadcasting app for iOS and Android, a new guide for finding what’s currently streaming across its service, and more.

With the launch of co-streaming, Mixer will now allow up to four streamers to combine their streams into a single page, where they’re displayed in a split screen view. This allows viewers to watch all the streams at the same time, while also participating in a centralized chat. While the feature could be used to broadcast a co-op session of “League of Legends,” notes the blog post about the new feature, it doesn’t have to be used to stream the same content.

Friends could be playing different games or even streaming something non-game related, like the music from a band or a multi-player board game.

Using a live streaming platform for more than gameplay is something rival Twitch has focused on in recent months, as well. The Amazon-owned company has added new channels for creative content, tools for vlogging, and ways for viewers to find streams related to non-gaming interests, as a means of broadening its user base beyond hard-core gamers.

This  co-streaming feature is rolling out today to all Mixer users and, in a few weeks time, Xbox One users will be able to invite friends to co-stream right from the Guide.

Mixer is also launching a new mobile app called Mixer Create into beta. The app will work on both iOS and Android devices, and currently allows you to self-broadcast. Soon, the app will allow to stream mobile gameplay directly from your smartphone to the Mixer service. When this launches, you’ll also be able to co-stream with friends who are broadcasting on PC, console, or mobile devices.

Also new is “Channel One” – a guide to what’s happening across the Mixer service. This aims to help viewers find something to watch by highlighting new releases, livestream events, tips and tricks, esports updates, and other content. The feature can also serve as an introductory guide to new users, who may not know exactly where to get started on the service, given the array of available content to watch.

The Xbox One dashboard will add a Mixer page, too, which will be another way of exploring what’s popular across the service.

While Microsoft hasn’t disclosed Mixer’s numbers, it’s clear that the company is heavily invested in bringing a cross-platform live streaming experience to users. Mixer (then called Beam) arrived on the Windows 10 platform through the Creators Update earlier this year, and hit the Xbox One at the same time.

With the added support for co-streaming and live broadcasting, Microsoft is also preparing a platform that can extend beyond just gameplay, offering streamers a way to live broadcast anything to their viewers, including their own vlogs. 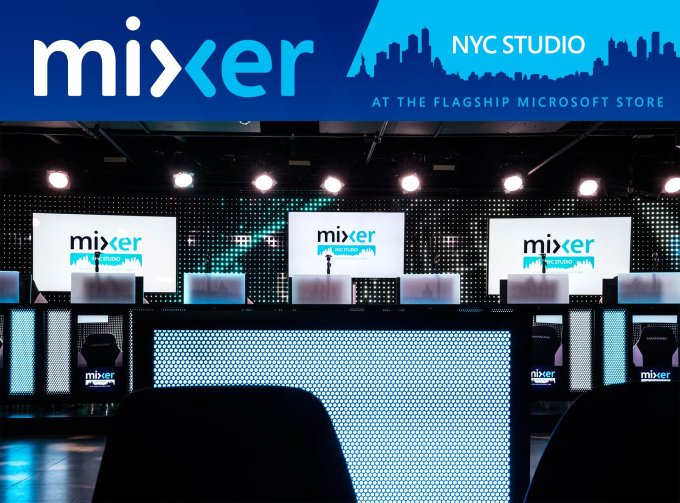 In addition to all these updates, Mixer also announced a new digital production studio in the Microsoft Store in New York, called the Mixer NYC Studio.

The idea is that the studio will offer broadcast facilities and host gaming and esports events, which will go out live to viewers across the Mixer service.  Using a physical retail store for real-world events that showcase the company’s technology is something Apple is doing as well, most recently with expanded educational programming featuring artists, photographers and musicians.

Update, 6/1/17: Microsoft reached out to correct its earlier announcement and clarify that the mobile app is only currently available on iOS via TestFlight, not in the public app store. The beta is publicly available on Android, and the public release will launch on both platforms, iOS and Android, in the weeks ahead.