Yesterday at Google’s developer conference I/O, the company announced upgrades to its Payment API that will make it easier for end users to switch between their multiple payment cards when checking out on the mobile web, or paying for things in apps – even if those cards were not saved in Android Pay. Today, Google announced a few more changes to its payments business – including an expansion of Android pay, new loyalty features for merchants, and more.

Android Pay is available in 10 markets, and will soon add Brazil, Canada, Russia, Spain and Taiwan, says Google. The company is also close to deploying a smoother mobile checkout experience for PayPal users.

Another significant new offering is an API aimed at merchants, who want to reward their most loyal customers.

The Card Linked Offers API will allow merchants using Android Pay to engage with customers before they enter the store, then reward them after they leave.

Panera Bread is among the first to go live with the API, which it’s using with those customers who have saved their MyPanera loyalty card to Android Pay. These customers can discover offers which they can redeem at the store using their MyPanera account at checkout. 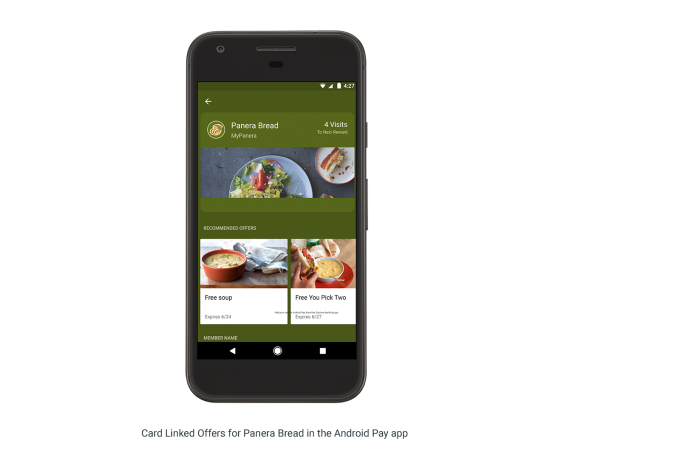 Google has also made it easier for users to add loyalty programs to Android Pay. Walgreens, for example, will send Android Pay users a notification on their smartphone that lets them link their Walgreens loyalty card to Android Pay for use on future visits, after they’ve first paid using Android Pay while giving their loyalty account info manually at checkout.

Walgreens has rolled this out to its over 8,000 U.S. stores, Google says.

Google has partnered with First Data-owned Clover to integrate smart tap into Clover’s developer APIs, too. This will allow companies to build Android apps for loyalty, coupon and gift card redemption and other features, like order ahead and tap for pick up.