Nexla, a competitor in the TechCrunch Disrupt Battlefield this week in New York City, has more on its plate than simply impressing the judges. It also chose to launch their public Beta at the event and, while it was at it, announced $3.5 million in funding led by Blumberg Capital with participation from Storm Ventures, Engineering Capital and Correlation Ventures.

That’s what I call making the most of your Disrupt experience.

The company is attempting to solve a major problem around processing data from multiple sources and putting it into a form to make it useful for a given customer and how they do business. It’s a challenge the founders faced first-hand at their previous jobs working in the advertising business where they had to deal with tens of thousands of such data sources, ingesting 20 terabytes of data every hour. They have taken advantage of that experience to create Nexla — and they believe in the coming years, that could seem like a small amount of data.

“At high level data, Nexla is building a data operations platform and making it scalable and repeatable. As people work with more data sets with higher frequency and volume of data, it becomes more complicated, especially when you’re getting data from a third party,” explained company co-founder and CEO Saket Saurabh.

In the past, this problem usually got passed off to a set of highly skilled engineers or database administrators, but the founders formed Nexla with the goal of putting the ability to process this data within reach of line-of-business folks. In fact, they believe they can not only scale to handle tens of thousands of data sources, they also can enable anyone who can deal with an advanced Excel spreadsheet to manipulate data in Nexla.

The company also wants to make it easier to share data between companies, something that is increasingly necessary, yet incredibly complex. Two companies could call the same field different names — last name versus surname, for example — while one may provide 15 fields and another only 10 to describe a similar record type. Nexla has developed tools to solve these kinds of issues quickly, automating what they can and making it easier to manipulate what they can’t. 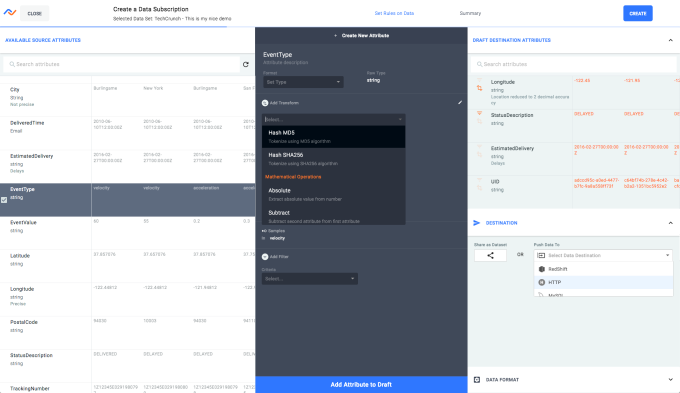 Saurabh likens Nexla’s automation capabilities to Google Photo, which can take your photos and organize them by subject into albums automatically. Similarly, Nexla takes data and puts it into data sets based on what the data looks like. Users can then tweak the results as needed in the interface.

By simplifying a complex process, it can free line-of-business users to play with the data in ways that make sense to them, leaving them freer to experiment and open up new possibilities for using the data. If you have to continually get back in line to deal with data processing experts on the engineering team, it discourages this kind of experimentation in a much more rigid system.

While Nexla will generate reports and analytics on the data, Saurabh points out it is not a data visualization tool, although it can export data to those types of tools if need be.

The company launched in March 2016. They released a private beta earlier this year in February and are making the product widely available in open Beta this week. Beta customers include Instacart, InMobi and Grand Rounds.