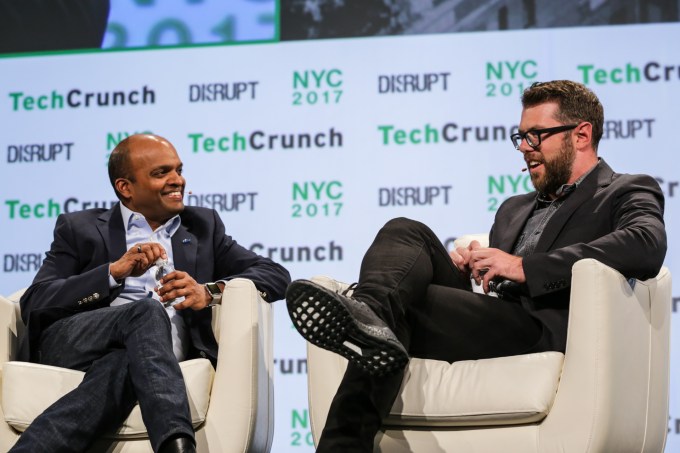 Today at TechCrunch Disrupt NY, our own Darrell Etherington sat down with Ford Motor Company CTO (and Ford employee since 1987!) Raj Nair to chat about the future and how a company like Ford shifts with an evolving industry — particularly as the car industry adopts the idea of cars that drive themselves.

While the overall panel was about autonomous vehicles, they started off with a quick mention of the GT — Ford’s ridiculous (both in its ridiculous performance and in the ridiculously low number of them being made), $450,000 supercar. We spent an afternoon checking out the GT a few weeks back.

“Yeah.. that car is a little bit my baby,” said Nair. “But it’s kind of the opposite of a driverless vehicle.”

Nair elaborated on this a bit later when Darrell asked if we’d see a 100th anniversary GT (as this new GT is a 50th anniversary celebration of the original) — effectively, whether or not Ford would still be making human-driven vehicles in 50 years:

Technology is progressing fast. We’re 114 years old, and there are still aspects of the start of the automotive industry and what it meant for personal mobility. Horses don’t serve the role that they used to, but there’s still a lot of horse races that are a big deal, and people still enjoy riding horses. I hope it doesn’t go that far, but it’s certainly a possibility. I think there will always be an aspect of controlling a piece of machinery, of two or three thousand pounds of machinery being controlled by very minute movements of your hand… Taking yourself to the limit, taking the machine to the limit; there’s something in our brain wired to enjoy that, so hopefully that’s always a part of it.

While there will probably always be those who’ll want to drive themselves (if eventually only for sport), the industry trend toward figuring out autonomous vehicles seems clear. But this introduces a whole new challenge for the industry: if a vehicle can drive itself… you don’t necessarily need to own one, as you can just summon a car when you need it. Nair suggests they’re well aware of this, but it’s something on the horizon:

The pace at which the technology is advancing is faster than it’s ever been. It’s becoming more readily apparent to the broader public and the industry, and new entrants out in Silicon valley, and there’s a lot more players coming into it. I think on the usership side — the popularity of ride hailing, the ride sharing model, is increasing — yet, the aspect of personal ownership is still really, really high. We’re at a record industry of sales right now. I think we’ll see a distribution change over time, but that part of it’ll be gradual. Yet this industry operates on pretty long cycles, so we need to be planning for that right now.

But with just about every automotive maker cracking away at this challenge, how might Ford be the one to get it done? At least in part, by not insisting that they do it all themselves.

“We’re not intent on doing it ourselves,” says Raj, mentioning their acquisitions (like SAIPS, the machine learning company Ford purchased in 2016), licensing and investments — like Argo AI, a team Ford committed to investing $1 billion dollars into over five years. “Probably the most sought-after talent in the autonomous space are the roboticists, the software experts and the machine learning experts… We have a very strong team internally, but to be honest, they were being very heavily recruited.”

Ford has already been experimenting with shared vehicles with Chariot, the ride-sharing service it acquired last year. If shared vehicles/routes becomes a sizeable part of Ford’s business, who owns that shared (and, presumably, eventually autonomous) fleet? Ford? Private entities? Municipalities? (As Darrell noted onstage, TechCrunch had previously heard that Ford was talking with municipalities about owning ridesharing fleets as they might own public transit.)

We’re experimenting with a couple different forms of that. Part of that is the Chariot experiment which we’re doing, where we’re owning fleets of transits, running shuttles and working with municipalities on some aspects of dynamic shuttles and dynamic routing, but also fixed routes at a smaller scale. And other city-as-customer pilots… I think we’re open to ownership of that fleet. We’re open to different models, and different discussions as to where ownership of that fleet would reside… We’re interested in managing those vehicles as a service, we’re interested in manufacturing those vehicles and we’d also be interested in the profit opportunity for transportation services.

So if Ford deeply embraces technology at deeper and deeper levels moving forward, will it keep its “Ford Motor” name or change it to something like “Ford Technology”?