There’s nothing wrong with tooting your own horn a bit when you hit a number like 500 million, and that’s what Microsoft did this morning to kick off its Build developer conference. That’s the company’s latest count of monthly active devices using Windows 10.

In response to questions at a press event about how this compared to previous launches, a Microsoft representative demurred, saying it’s difficult to compare them — and that’s true. But let’s do it anyway!

Windows 10 released in July of 2015, and by the end of September (call it two months) it was at  100 million devices. It hit 200 million in January of 2016 — that’s six months total, give or take — and 270 million in March. So according to these back-of-napkin calculations, it’s grown about twice as fast as Windows 8 did. And it hasn’t stopped, either: another 230 million have been sold since then.

I’ve taken the liberty of updating Microsoft’s “by the numbers” chart for easy reference: 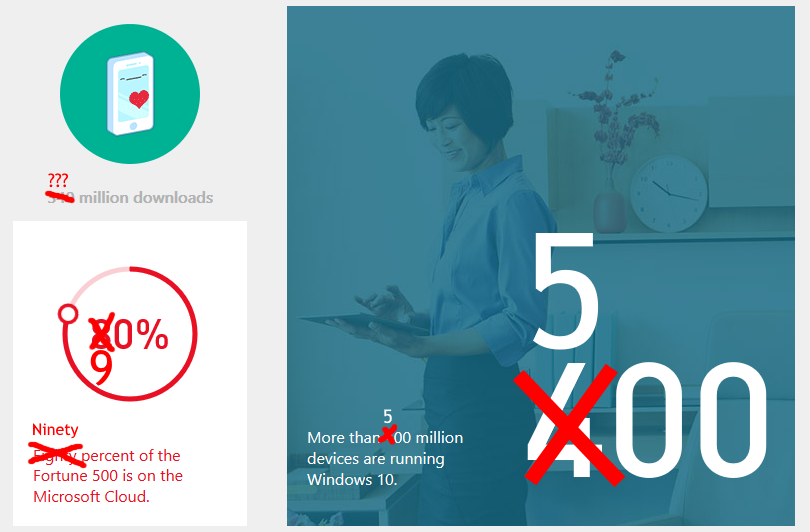 And yes, they also announced that 90 percent of Fortune 500 companies use Azure in some form or another, which isn’t hard to believe.

Other notable stats: Office has 100 million commercial users monthly, and Cortana has 141 million MAUs. One could read that last statistic to suggest that 359 million Windows users never touch the virtual assistant, but that would be kind of cruel since there’s all kinds of embedded and workstation installs where something like Cortana just isn’t a good fit.

Still, with some of the improvements and integrations coming to the Cortana platform over the next days, she might soon prove a more universally used resource.