There are a number of great deals to be had on Amazon, but finding them across the retailer’s vast array of products is still a challenge. That’s where a new app called Nugget comes in. The app scours Amazon for higher-quality products at lower prices, and then curates them into categories you can browse from your phone. All its deals are sourced from Amazon, so you don’t have to worry about fulfillment, shipping or customer service issues. Plus, a majority of the recommended products include Prime shipping, for faster, 2-day delivery.

The idea with Nugget is to offer an alternative to popular shopping apps like Wish, which also cater to bargain hunters. 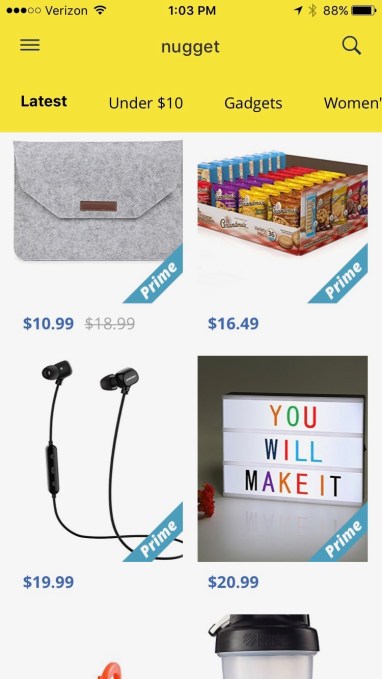 But the problem with Wish is that its collection of low-cost unbranded clothes, jewelry, household items, smartphone cases, and more largely comes directly from China. Wish shoppers tend to complain about lengthy ship times, poorly made products, or clothing that runs smaller than expected – though many are willing to deal with the downsides in return for the ridiculously low prices.

Nugget is also similar in other ways to Canopy, a shopping app that curates Amazon’s best products. However, Canopy’s suggestions aren’t necessarily low-cost items. Amazon is also now offering its own curated store through a site feature called Interesting Finds.

Nugget, meanwhile, is carving out a niche that’s focused more on the deals to be found on Amazon.

The idea for the app comes from San Francisco-based developer Tom Schmidt, previously a product manager at both Facebook and Instagram. 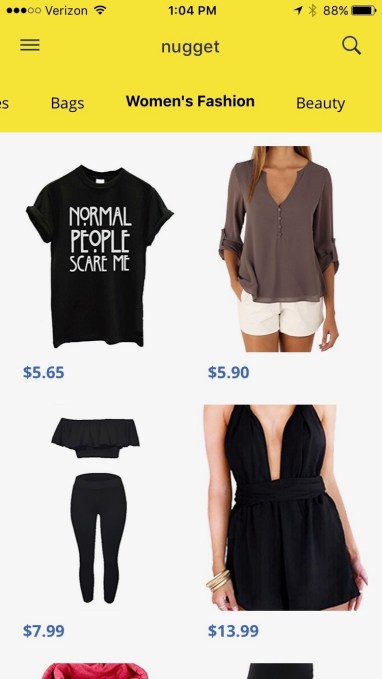 He says that apps like Canopy and Amazon’s Interesting Finds were inspirations for Nugget.

“We think [Canopy] could have done a better job on mobile and went for this high-end aesthetic which doesn’t really fit the Amazon affiliate business model,” explains Schmidt. “People are much less concerned about free shipping and more much concerned with finding the right item when spending $100+,” he says.

Schmidt believes a price point of under $20 works better on mobile, and built Nugget with mobile discovery in mind.

The startup uses a combination of machine learning and human curation (via a network of contractors, the site says), who help pick the products featured on Nugget. The human curators help to de-dupe the content, and find items that represent the best deal with the best shipping options.

The products are organized on Nugget into different categories for easier discovery. There’s a section with the latest deals, and another for just those items under $10, followed by categories like gadgets, women’s watches, home decor, hobbies, phone upgrades, bags, women’s fashion, beauty, and snacks. (The app will show you men’s or women’s items, based on your Facebook gender info provided at sign up.)

As you browse through the deals, you can “heart” them to save them to a “My Nuggets” page in the app for later purchase, or you can tap through to be taken to Amazon to buy.

The app takes advantage of Amazon’s support for deeplinked affiliate links, so Nugget will actually launch the Amazon app installed on your phone and take you directly to the item’s page for a one-click checkout.

Bootstrapped Nugget makes money through affiliate fees for now, but may consider other monetization options in the future, Schmidt says.

The app is a free download on both the iTunes App Store and Google Play.