Apple yesterday updated its App Analytics service for mobile app developers on iTunes Connect, which will now offer more detail on how users found an app – whether through browsing or searching the App Store, or if they were referred by way of another app or a website. The updates could help developers better understand how keyword changes affect their search ranking on the App Store, or figure out if it’s better to be ranked higher in the charts than it is in search, among other things.

App Analytics was first introduced by Apple two years ago, and today continues to offer developers of all sizes a non-technical means of accessing key information about an app’s performance, including user engagement, marketing campaigns’ effectiveness, and monetization. The service is included with the Apple Developer Program membership for no additional fee. 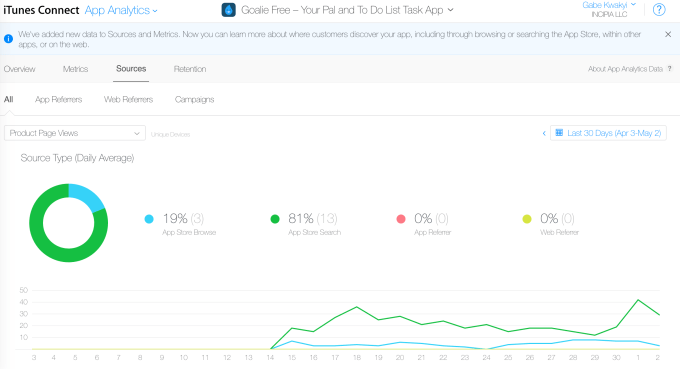 While there are other ways to track these sorts of metrics through third-party integrations – and those solutions may offer more detail, at times – Apple’s App Analytics has the advantage of being a first-party measurement solution. That means its data is coming from Apple and the App Store directly, making it more reliable.

Browse lets developers know if customers found their app via the Featured, Categories or Top Charts in the App Store, while the Search source will show customers who found the app by entering in a search query.

With App Referrer, developers will be able to see which marketing relationships are performing better than others, so they can choose to work more with those app publishers that are sending them downloads.

Web Referrer (previously Top Websites) will track customers who found the app while on a website in Safari on iOS.

The changes come at a time when Apple has been paying more attention to the needs of smaller developers, having last year rolled out a revamped developer website with more guides, how-to’s and videos, and this year made showcasing indie game developers a permanent feature on its App Store. It has also rolled out developer-friendly features recently, like being able to respond to customer reviews, and solicit App Store ratings within the app, without requiring users to exit to the App Store.

It’s possible as well that Apple is rolling out these metrics ahead of an App Store makeover at WWDC that could impact the role search and rankings play in app discovery, and wanted to get the updated analytics service into developers’ hands in advance of those changes.