Hack Harassment, founded by Vox Media, Intel and Lady Gaga’s youth-focused Born This Way organization, will gear up to fight online harassment with the introduction of its first advisory board. Comprised of members from anti-bullying research groups, AAA game developers, and some things in between, the board will bring the collective experience of the multi-disciplinary leadership to bear on one of the web’s most intractable problems.

Members will serve as both strategists and public ambassadors for the organization, which seeks to combat online harassment with a mix of technical solutions and awareness campaigns. In February, Hack Harassment teamed up with Kesha to launch its first anti-harassment PSA, a short, punchy YouTube video that invites viewers to join the musician in the fight against online hate.

Hack Harassment’s board brings together seven different voices with a range of perspectives and expertise:

According to its newly-minted members, the heterogenous mix is what makes the organization uniquely suited to rise to the challenge.

“I think what’s unique and different about this group is that we represent a wide cross-section of individuals who care deeply about this issue – who have come together from various backgrounds – to really examine what can be done to decrease the frequency of online harassment,” Heller told TechCrunch.

“No man is an island. If we really want to see less hate online, we have to share ideas and talk with leaders in other industries. I look forward to working with my fellow board members to make the internet safer for all us.’ 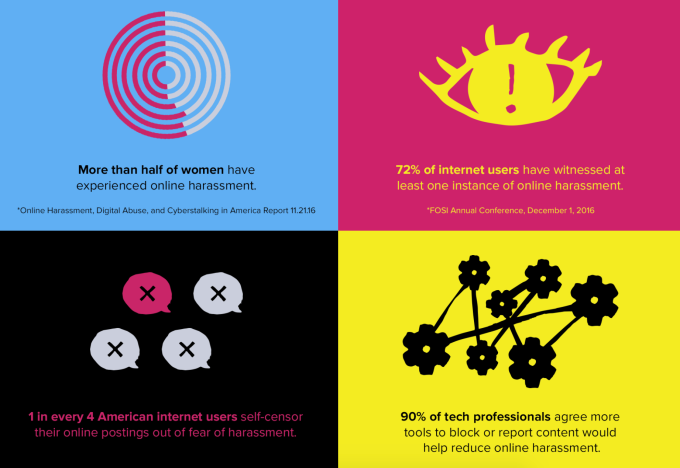 Combining their collective insight from business, tech and research, Hack Harassment hopes it can effect positive change for one of the online world’s thorniest issues. “Not one group can solve the problem of online and offline harassment,” Swearer said. “In order to reduce and eliminate harassment, we need the collective expertise from individuals across diverse fields.”

Chris Loo, Hack Harassment director and head of global diversity and inclusion at Intel, is optimistic about the group’s next steps. Following its star-powered PSA, Loo hopes to harness the innovation that has emerged at the Hack Harassment’s hackathons.

One of the organization’s biggest next steps is tuning a harassment detection algorithm that it intends to open source. The algorithm starts with a basic understanding of what a hateful interaction might look like on Facebook or Twitter, for example, but with machine learning and crowdsourced input it can evolve into something much more nuanced. With a beta in the works, Loo hopes that user feedback can shape the technology into something that perceives subtle differences in communication across platforms and communities. He cautions against anti-harassment efforts that “average out peoples’ opinions,” since that kind of simple math tends to reframe the problem as something two-dimensional that doesn’t reflect a complex reality.

For Hack Harassment, defining the target behavior it seeks to change is both a starting point and one of the trickiest parts.

“Even if you took a universal data set, people have different ways of looking at what is harassment and whats not,” Loo said. “One of the things we really honed in on is understanding what that looks like with different people. Whether it’s a developer community or in gaming, it’s going to look very different. Harassment is very personal.”