As part of the media push surrounding the premiere of Alien: Covenant (set to debut May 19th), Twentieth Century Fox and its compatriots are offering up a VR teaser — Alien: Covenant In Utero.

This non-Nirvana-related short puts an audience inside the moment of birth for Alien’s eponymous aliens. The short (much like the album from which it does not take its name) is bloody, terrifying and incredible.

In “In Utero,” one can hear the terrified cries of the humans witnessing the alien birth, and the increasing heart beats — and bodily reactions — of the host as the “neomorph” struggles to burst free.

The mini-experience, which clocks in at around 90 seconds or so, will be available tomorrow on the Oculus Video app through the Rift, or the Samsung Gear VR, powered by Oculus. A 360 immersive trailer is also available on Facebook. 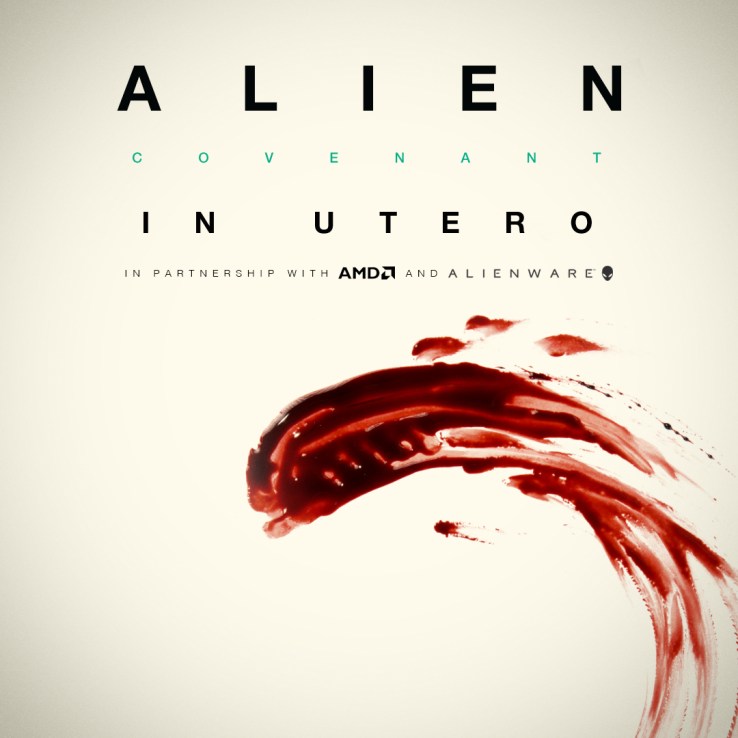 Ultimately, moviegoers balked at paying $20 for a 30-minute virtual reality experience, but Fox is hoping that the second time’s the charm.

Alongside RSA VR (the newly formed virtual reality division of Ridley and Tony Scott’s studio), FoxNext VR Studio, MPC VR (a Technicolor company), sound engineering studio Mach1 Studios, AMD Radeon and Dell’s Alienware gaming computers, Fox is taking the show on the road and will be hitting 15 Regal Cinemas movie theaters across the country to let moviegoers try out what Fox hopes will be the next wave of entertainment.

Beginning May 10th, a little over a week before the Alien: Covenant release, the In Utero show will be available across all mobile and tethered VR platforms, including Google’s Daydream View, HTC Vive and PlayStation VR.

“With the In Utero experience, audience participation is taken to a whole new level. You get to be a Neomorph, exploring what’s happening around you and within you,” Ridley Scott said in a statement.

Scott, who produced the VR experience, handed directing reins over to newcomer David Karlak, who made a name for himself in the sci-fi film community with his short film Rise.

“The seed for this project is Alien as a whole,” said Karlak in a panel discussion about the VR short that was held at Technicolor’s Culver City event space in Los Angeles. “Alien was a movie that pulverized me and certainly was a movie that set me on my journey as a filmmaker.”

Using assets that Technicolor’s MPC digital effects team culled from the movie itself, Karlak and the rest of the creative team set to work building out the virtual reality experience that’ll be available tomorrow.

All of this action is laying the groundwork for what will be an expanded collaboration between Karlak and the Scott studio on a virtual reality experience similar to the one that Fox had rolled out with “The Martian.” Everyone I talked to was pretty quiet about what that might look like, but it’s definitely coming. And increasingly these kind of multi-platform entertainments are things that Fox will be looking to roll out with other tentpole releases.

At the beginning of the year Fox announced that it would partner with Chris Milk’s Within Unlimited on a virtual reality experience for the next Planet of the Apes film. Fox also invested in the company’s $12.5 million financing round.

And Within isn’t Fox’s only investment in the VR world. The studio is also a big backer of the Osterhout Design Group, which has developed technology for virtual and augmented reality headsets and Dreamscape Immersive, the virtual reality multiplex developer that’s building its first site in Los Angeles.

For now, the studio’s concentration is on rolling out the (really freakin’ cool) In Utero experience. It’s worth seeing, but just remember… in VR everyone can hear you scream.