Once derided as a silly novelty, emojis are coming into their own as a communication tool. New app Wemogee uses the ideograms to help people with aphasia, a language-processing disorder that makes it difficult to read, write or talk.

Created by Samsung Electronics Italia (the company’s Italian subsidiary) and speech therapist Francesca Polini, Wemogee replaces text phrases with emoji combinations and can be used as a messaging app or in face-to-face interactions. It supports English and Italian and will be available for Android on April 28, with an iOS version slated for future release.

Aphasia is caused when brain regions responsible for language comprehension and speaking are injured. One of the most common causes is strokes, but aphasia can also result from brain tumors, traumatic brain injuries or neurodegenerative diseases.

According to the National Aphasia Association, about two million Americans have the disorder and 180,000 more develop it each year. Many people with aphasia gesticulate, draw or use picture boards to communicate. Wemogee is designed to give them a faster and more versatile alternative. 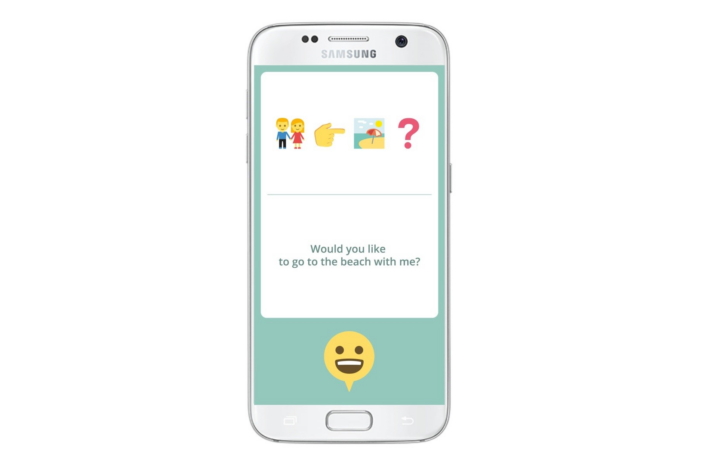 The developers of Wemogee claim that it is “the first emoji-based chat application designed to enable people with aphasia to communicate.” The app has two modes: visual and textual. An aphasic users sees emojis, which are arranged to convey more than 140 phrases that have been organized into six categories. Wemogee translates the emoji combinations into text for non-aphasic users, and then translates their responses back into emojis.

“Aphasic patients understand emojis because they depict all aspects of emotions. The use of gestures, images and facial expressions is a function perfectly preserved in understanding and often also in the production of language,” said Polini in a prepared statement.

Though detractors say emojis “dumb down” written communication, the symbols are extremely helpful for adding nuance to non-verbal conversations. One app even uses emojis to help children communicate about abuse.

As Unicode continues to make the emoji “alphabet” more inclusive, the little symbols will help more people express themselves.