Flying drones to inspect a farm, construction site, or any other venue from overhead can generate a huge amount of data. It takes time, though, for drone users to upload and turn this high-resolution data into maps, graphs or business intelligence they can act upon.

Today, a data management platform for drones called DroneDeploy, is launching a tool called Fieldscanner that makes it possible to draw a low-resolution satellite map in real time with a drone, in the field, even where there’s no internet connectivity. Being able to see the map draw out as you’re flying means you can change course, or take multiple passes over a problem area before you land.

According to DroneDeploy co-founder Jono Millin, here’s how it works:

“You take your drone out, plug your phone into a remote control using the DroneDeploy app. In our flight-planning interface, there’s a Fieldscanner toggle, which you can turn on from the start. Then you press “go,” and begin flying as you normally would. You can view your Fieldscan offline. You don’t have to connect and upload your data to the cloud. You can start using it from the field.”

Fieldscanner doesn’t interrupt normal data gathering by drones. Users can still upload, store and analyze all the high-res data that they normally would while engaging the new feature.

Millin, who co-founded DroneDeploy with Mike Winn and Nicholas Pilkington in 2013, explained that the ability to generate maps right away should help users in areas lacking reliable cellular and internet services. But it also makes drones more helpful in scenarios that require fast decision-making.

For example, crews sent to evaluate a flooded dam could use drones with Fieldscanner to figure out where to send repair resources first, while they’re still on-site. Or law enforcement could conduct spanning passes over an area to find a missing child last seen in a red coat, when time is of the essence.

Newer drones and mobile devices, which have strong communication links, precise GPS, and better compute capacity than previous generations, made it possible for DroneDeploy to begin offering real-time maps in the field, Millin said, especially DJI’s Mavic and Phantom 4 Pro. 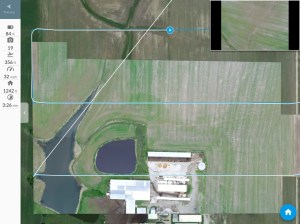 “Our mission has always been to make drones accessible and a great tool for productivity. Taking processing we used to do exclusively in the cloud and doing this at a slightly lower resolution in the field, reduces time requirements so you can have data instantly accessible.”

Spending is expected to surpass $20 billion in the commercial drone market by 2021 according to forecasts from Goldman Sachs. As competition encroaches on DroneDeploy’s early lead in this market– competitors now include Airware, 3DR, Dronifi, PrecisionHawk and others– Fieldscanner proves a differentiator.