In the battle to lure artists to its platform, Spotify has used exclusives, free advertising, the promise of more listeners, and open access to data artists care about, like number of fans and listens. On that latter front, Spotify released a data dashboard called Fan Insights in late 2015, allowing artists to see how well their music is performing on the service. Today, Spotify is taking the beta label off this service – which is now rebranded as “Spotify for Artists” – and making it accessible to all artists and management teams.

The new dashboard, like Fan Insights before, will offer data on an artist’s music and their fans including demographic details like age, gender and location.

It shows which Spotify features fans are using to discover and play an artist’s songs – something that can help with crafting promotions and partnerships. And it can inform artists about what other bands and musicians their fans like, which helps artists figure out who to collaborate or tour with, for example. 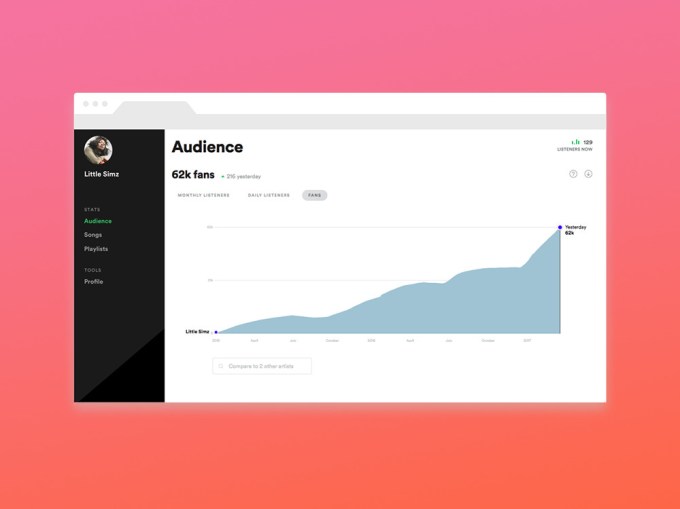 And, of course, it will give data on listens – a figure that gets updated in real-time as the artist’s music plays – as well as song data, playlist data, and notifications when fans add a track to their playlists.

With the relaunch as Spotify for Artists, the platform has broadened its scope beyond just music data, and will also serve as artists’ new home for everyone they need from the service.

This includes getting verified (to receive the checkmark on their profile – something that required a separate form before), getting support from Spotify, and even customizing their artist profile page. 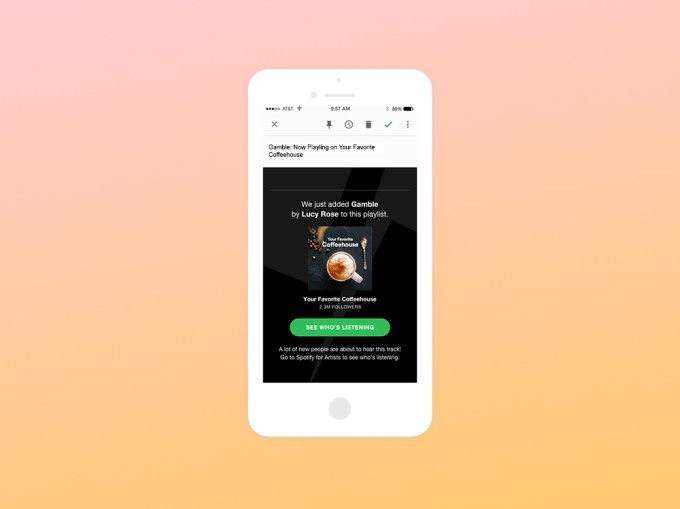 Artists will be able to upload their own photo to the service, as well as further customize their profile by offering their “pick” – which can be a featured song of their own, or one from another musician they want to support. They can also create and share their own playlists – again either featuring their own music or tracks from others.

The company says that over the past 17 months, tens of thousands of artists joined the Fan Insights beta, which helped to inform the new features rolling out now with the public launch. Those existing users will be automatically upgraded to the new Spotify for Artists, while others can get started by accessing their profile page on the service, available here. 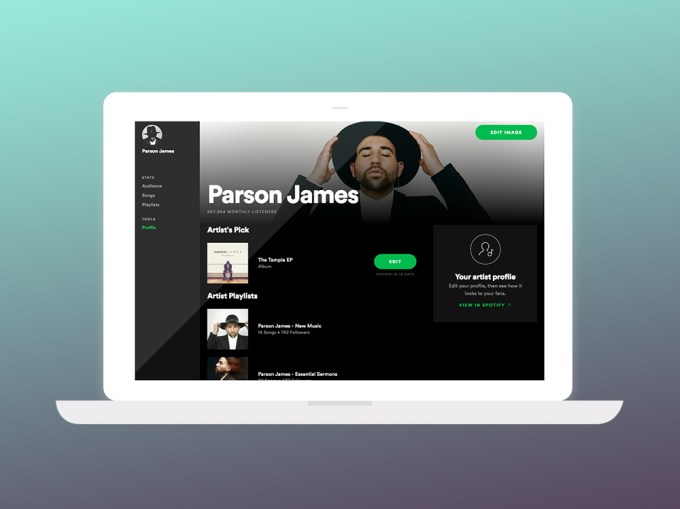 The dashboard’s launch is a shot across Apple’s bow, which has struggled with helping artists engage with their fans on its own streaming platform, Apple Music. The company tried again to add a social layer to its iTunes Store with the launch of Connect in 2015, but it didn’t pan out, given that today’s artists engage fans directly via Facebook and Twitter. (Connect was later demoted to a less prominent position in the software.)

Giving artists the data and therefore the power to help themselves in the complex streaming industry – where fans are listening across platforms, across services, and not necessarily tuning into the radio or buying records – may go a long way to attract artists to Spotify’s platform. This has the broader effect of helping Spotify expand its catalog and become a place where fans feel like their artists are more accessible and engaged, which in turn could boost subscriptions.

Spotify has made a bit bet on data, with strategic acquisitions as well, like The Echo Nest, as well as Sonalytic, MightyTV, Seed Scientific, and others.

The company says it plans to add new features for its dashboard in the future, as artists continue to offer feedback.