PayPal is joining forces with Google’s Android Pay mobile payments platform, the companies announced this morning – an effort aimed at allowing PayPal to expand its footprint both within mobile applications as well as at brick-and-mortar retailers. The partnership will see PayPal becoming available as a payment method in the Android Pay service, which will allow U.S. users to pay for things like Uber as well as at retailers like Walgreens, and restaurants like Dunkin’ Donuts and Subway.

The integration in Android Pay will begin by allowing Android users to select their PayPal balance as a method of payment, but will expand to include the cards users have added to their PayPal account in the months ahead.

At launch, the partner integration is with Discover, so PayPal in the Android Pay wallet will work anywhere Android Pay and Discover are accepted.

The deal follows other moves on PayPal’s part to form partnerships with the major card networks, which also had similar goals of expanding PayPal’s footprint by joining forces with the incumbents, instead of doing battle with them.

Last summer, PayPal buried the hatchet with Visa making its online payments service an option when consumers pay with their smartphones in stores, and allowed Venmo users to instantly withdraw money when their Venmo account was linked to their Visa cards. At the time, the company described this effort as “a new PayPal” that is “actively partnering across the digital payments landscape.”

The company then inked a similar deal with MasterCard, again for store payments. That partnership also enabled MasterCard’s digital wallet service as a payment option for PayPal’s Braintree merchants. 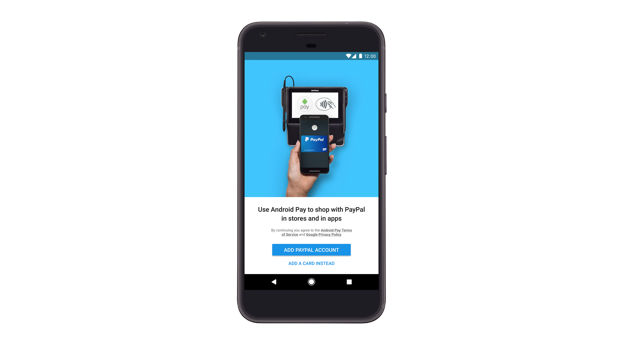 One of the larger goals with these initiatives is to help PayPal establish more traction at point-of-sale, where Apple Pay is currently dominating. According to a recent report from Juniper Research, Apple Pay usage has nearly doubled year-over-year, and is expected to reach 86 million users by the end of this year. Samsung Pay and Android Pay are growing too, but have more limited traction. They are expected to reach 34 million and 24 million users, respectively, by the end of 2017.

PayPal has additionally made deals with Facebook, in its Messenger app and the third-party e-commerce bots its supports, and it already had a deal with Google to be available as a payment method in Google Play. PayPal’s Braintree has also enabled Android Pay as a form of payment since Android Pay launched.

The company says it processed $102 billion in mobile payment volume and two billion mobile payment transactions in 2016. That’s a signal that its partnership strategy appears to have been the better option for the older payments service as it tangles with Apple, which has the advantage of owning the hardware, the OS, and has a big stash of customers’ credit card information, thanks to its App Store and growing line of subscription services, like Apple Music and iCloud.

In its last earnings, PayPal saw strong revenue growth with revenue of $2.98 billion in the fourth quarter and adjusted earnings per share of 42 cents.

The PayPal integration with Android Pay will be available on Android OS 4.4 and higher, including KitKat, Lollipop, Marshmallow and Nougat.