Google announced this afternoon it’s adding new features to both Google Search and Google Play Newsstand that will help people keep up with their favorite teams and their standings during the NBA and the NHL playoffs. In Search, you’ll now find Knowledge Panels with information directly from the teams, like highlights, photos or GIFs, for NHL, NBA as well as MLB teams. Meanwhile, Newsstand will also offer top headlines, scores, analysis and videos.

The Search feature is taking advantage of Google’s recently expanded “Posts on Google” product, which allows organizations to share status updates and other information directly on Google’s Search result pages, where they appear as widgets placed among the blue links. Effectively, it turns Google itself into a variation on Twitter – but one where only approved organizations can share their news.

The feature was originally developed for the 2016 U.S. presidential campaign, allowing candidates to post updates to Google Search results pages. Last month, Google said it would open up this program more broadly, to organizations like museums, sports teams, sports leagues and movie studios, for example.

The addition of the sports updates is one of the first high-profile launches for Posts on Google, following the March announcement.

You can trigger these search results by entering in specific queries, like “Stanley Cup Playoffs” or a team’s name.

Google tells us these posts can be anything, from photos to GIFs or even call-outs to fans.

NHL and NBA updates are available in both Search and Newsstand, but MLB was only mentioned as being integrated into Search. 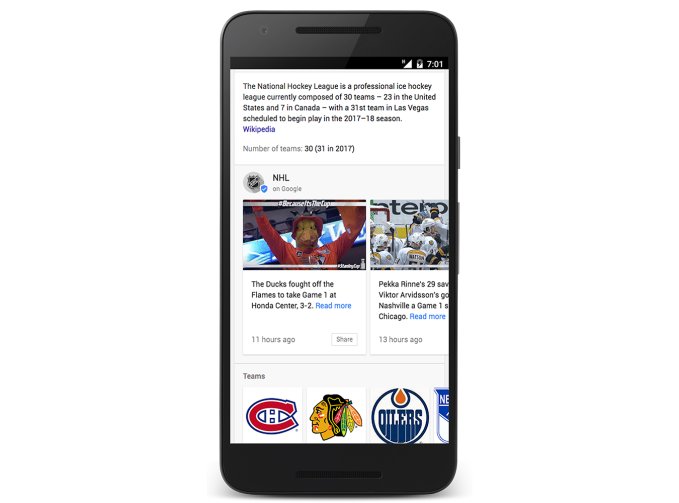 The real-time updates will also make their way to Google Play Newsstand’s app, which is available online at newsstand.google.com, or as a standalone mobile app on iOS or Android. The app will feature special NBA and Stanley Cup Playoffs sections, with the latest news, scores, analysis, and videos, in addition to the real-time posts (which are linked to Google Search).

These features are rolling out now globally in English, but the team information will appear for those in the U.S. and Canada.