A new application for iMessage called “Let’s Watch It!” introduces an easy way for you to share and watch YouTube or Twitch videos with friends to watch together, as well as react to them, and even voice or video chat while viewing.

The iMessage App Store doesn’t yet have a lot of breakout hits at this point, but group video chatting seems to be an exception. Last month, a growing video chat app called Fam raised $1.8 million to continue to invest in its video chat platform, with the intention of expanding to include features like game-playing, interactive live masks and filters, and – yes – watching videos together.

But Let’s Watch It! has beaten Fam to the gate with its own implementation of group video viewing, as it turns out. 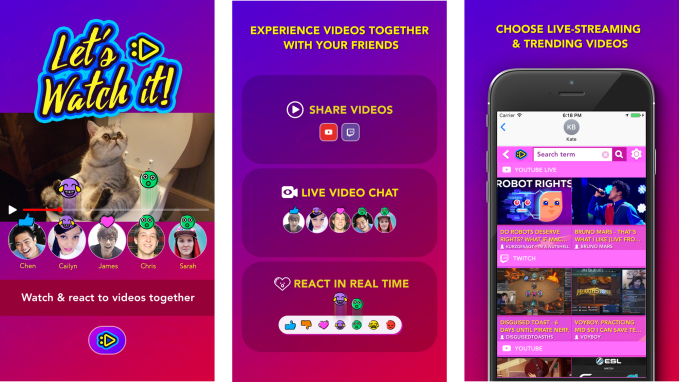 The app, has been around since early March, but recently added support for turning on the front-facing camera and the microphone in the app, giving it more of a social, real-time feel. But these features are optional – you can toggle a switch at the bottom of the screen to enable or disable the functionality as needed.

As for the video viewing experience itself, Let’s Watch It! does a good job here. If anything, the most difficult thing about using the app is navigating the clunky iMessage App Store, and then getting to the app from the iMessage interface. But once you’ve got it loaded, it’s straightforward to use.

The app presents a scrollable list of popular videos, or you can search for a particular title in YouTube, YouTube Live, or Twitch. You can toggle through the video sources from the hamburger menu on the left. When you find a video you want to share, you just tap it. This places a video thumbnail into an iMessage thread, ready for sending. 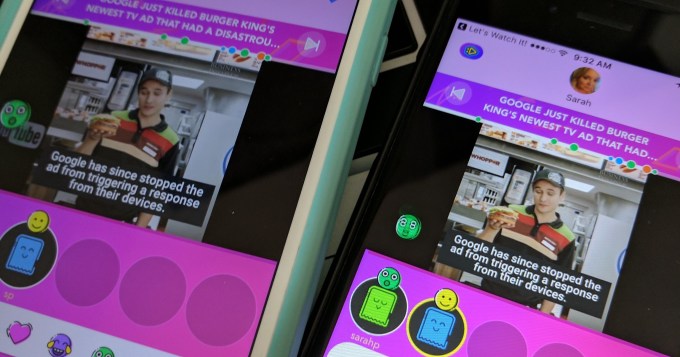 When the recipient gets the video and taps it, they’ll be directed to download the app if they don’t already have it installed.

But once they’re in Let’s Watch It! with you, everyone can view the video together in real-time.

When someone joins the viewing party, confetti appears all over the screen, letting you know they’ve arrived and are now watching with you. The viewers each have their own username and icon below the video, which is either a default avatar, a sleeping avatar if they’re offline (complete with zzzz”), or a live video feed piped in from the phone’s camera, if they’ve toggled that feature on.

If one person has already started watching the video, the newcomer will be joined at the same spot so the two streams are synced up. However, either party can rewind the video and start it again.

While viewing, you can tap on emoji reactions that are a variation on those you’d find on Facebook, plus the standard thumbs up and thumbs down. These will float up over the video where they’ll also be seen by other viewers.

In testing, I didn’t have issues with the videos not syncing or any lagging, but there was one small glitch that I came across. When a video finishes, the app moves on to whatever video it has queued up to auto-play next. If you then try to tap the video thumbnail you were sent in iMessage to re-watch the original video again, it doesn’t play. Instead, the app will just restart the video that had been autoplaying in the queue.

This feature is likely by design. As latecomers join in a group video viewing session by tapping on the thumbnail, it makes sense to sync them up to whichever video the group has moved on to next, instead of the first that was sent out. But it’s still not ideal.

However, this is a minor quirk, and can be resolved by seeking out the original video and re-sending it as a new thumbnail in iMessage.

The app was created by the team from NEA-backed Little Labs, which is regularly experimenting with new app platforms, having previously built smartwatch-first apps like a watch face designer for Android Wear called Facer, mobile games for Apple Watch, and more recently, games for iMessage. (They also built the official game for the movie “The Martian,” among other things.)

Currently, its iMessage game Let’s Puck It! has grown to over a million users, says Little Labs co-founder Kris McDonald, and its success encouraged the company to develop more interactive apps for Apple’s iMessage platform.

Let’s Watch It! is currently a free download on the App Store, with no current plans to monetize. Note that it only works in iMessage, not on iOS.