We live in the age of fake news — both the really fake news that’s simply fake and the kind of news that some people like to call “fake” only because they don’t like hard facts. As long as there’s money to be made from fake news (or political gain to be had), the problem isn’t likely to go away. And while there are plenty of fact-checking organizations, unless you are looking for their data, you aren’t likely to see it.

Over the last few months, Google started working with these fact-checking groups to include links to their posts in Google News’ story clusters. That was a relatively limited program, though, and only available in the U.S. and U.K. Starting today, though, the company is going to cast a far wider net: fact check is now available globally and, in addition to Google News, it’s coming to Google’s search results pages. 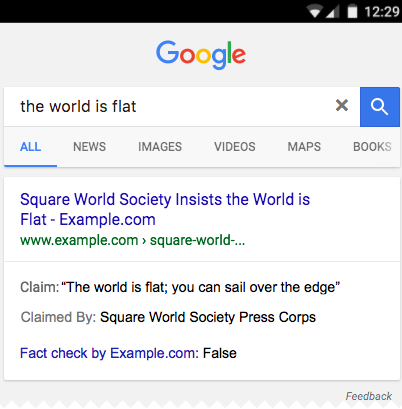 In Google News, articles that include a fact check are marked with the “fact check” label.

In practice, this means that if you are looking for facts in Google Search (maybe to make sure it’s not fake), you will now regularly see information from sites like PolitiFact or Snopes that will prominently appear on the page. Google will present a link to those sites’ fact checks, together with a bit of additional information about the claim and, of course, whether this organization rated it as true or false (or somewhere in the middle).

Occasionally, of course, different groups may have come to different conclusions. Some of these claims can be a bit fuzzy, after all. Google says it will present those different opinions to its users. “Even though differing conclusions may be presented, we think it’s still helpful for people to understand the degree of consensus around a particular claim and have clear information on which sources agree,” the company writes in today’s announcement. “As we make fact checks more visible in Search results, we believe people will have an easier time reviewing and assessing these fact checks, and making their own informed opinions.”

On its help pages, Google notes that it is obviously not doing these fact checks itself (“If you disagree with a fact check, contact the website owner that published it”). Organizations that want to add their fact checks to Google Search must follow Google’s relatively stringent guidelines (the last thing Google wants, after all, is to unwittingly include fake news that masquerades as a fact check…). At the end of the day, though, it’s an algorithm that decides whether the source of a fact check is trusted — and chances are, somebody is going to find a way around this sooner or later.