Comcast, a cable company notorious for poor customer service, now wants to be your cellular provider, as well. The company today announced its new business, Xfinity Mobile, a wireless service offering unlimited data plans at $65 per line, that can be brought down to $45 per line for customers that subscribe to Comcast’s high-end  X1 packages.

The service will run over top Verizon’s network*, but will also include access to Comcast’s existing 16 million Wi-Fi hotspots already offered to current customers. If you’re on the wireless network and enter an area where Comcast’s Wi-Fi coverage is available, your phone will auto-connect to the hotspot, giving you a better connection.

Comcast and Verizon already had a relationship since 2011, when the two companies made a deal that would allow Comcast to resell Verizon’s wireless network services. Comcast last fall had announced its intentions to enter the wireless business by mid-2017.

Xfinity Mobile also includes access to Comcast’s TV streaming service, available through the Xfinity Stream app, which provides up to 200 live TV channels on demand as well as 40,000 on demand shows and movies. Mobile customers can use the Xfinity Home app, too, in order to remotely control their smart home devices.

There are more than a few caveats about Xfinity Mobile, however. Unlike some rival MVNO’s – mobile virtual networks, or those that run atop another carrier’s infrastructure – Comcast’s reach is limited.

For starters, the service is initially only available to Comcast’s 25 million internet customers, or any new customers who sign up for its broadband in the markets where Comcast has its footprint.

In addition, to get its lowest per line price on its unlimited plans, you have to buy its “best” (read: more expensive) X1 packages. In other words, you’re not really saving as much as you’d think – you’re just giving the company your money as a part of another service offering. After all, Comcast had effectively said before this service is meant to help retain and boost its cable subscriptions. 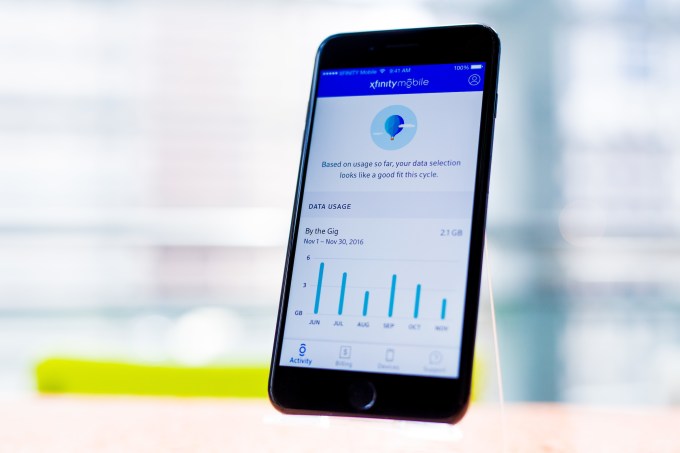 At present, the unlimited plan is priced at $65 per line for up to five lines with no usage limits, and $45 per line for those with the top-tier X1 packages. Speeds are throttled after 20 GB on this plan.

Customers can also choose to pay $12 per GB of data to share across their lines – something that could bring costs down for those who don’t consume much data. That’s a bit higher than the $10 Google charges for its similar offering via its Project Fi service.

With the included hotspot access, though, it may be possible for customers to keep data usage lower. Case in point: Comcast in its announcement cites a Nielsen report that found 70% of U.S. wireless customers use less than 5 GB of data per month.

Xfinity Mobile customers can switch between the unlimited plan and “by the gig” plan whenever they want, with no penalties. This can be done in the Xfinity Mobile app, where you can also track your data usage. Customers can mix and match plans across your lines, too. For example, mom and dad might have unlimited plans, while kids are put on a data diet.

Mobile services will be auto-billed, meaning your credit card will be automatically charged when payments are due. That might not work for everyone who need to adjust the exact day they pay from month-to-month, due to fluctuating access to funds.

Another caveat about Comcast’s MVNO is that you can’t bring your own device at this time. That will limit its appeal those just looking to switch networks but aren’t ready for a device upgrade.

However, Comcast will sell a range of iPhone and Android devices from Samsung and LG. Its iPhone lineup includes the 6s, 6s Plus, SE, 7, and 7 Plus, as well as the 7 Plus [PRODUCT] RED Special Edition, announced last month.

But Comcast is not doing anything to encourage those switchers who need a new phone, either. While many carriers today tout offers where they’ll pay the early termination fees or your remaining bill with your old carrier, Comcast is making no such offer to potential customers.

That said, Comcast isn’t necessarily trying to compete with the big guys – after all, it’s reselling Verizon, not exactly taking them on. Instead, the effort seems to be about being able to offer a more complete package to its customers at a time when the TV, broadband and wireless industries are merging and overlapping. Today’s customers are cutting their pay TV subscriptions, but then often turn to the same business to buy access to TV yet again – except, this time, it’s via the internet and streamed to their phones, as with AT&T’s DirecTV Now or Dish’s Sling TV, for instance.

Whether Comcast customers will want to double down and buy it all from one place remains to be seen, of course. The company’s reputation for customer service has suffered over the years, and though it claims to offer 24-7 support for Xfinity Mobile via text messaging and a call center, customers may be wary of the potential headaches they’ll face.

Xfinity Mobile is not immediately available, but will launch sometime later this year.