Melissa Jun Rowley Contributor
Melissa Jun Rowley is a journalist, entrepreneur and activist focused on the intersection of storytelling, technology and social justice. As the founder and CEO of Humanise, Inc., she is developing The Toolbox, a data-driven humanitarian initiative created by musician Peter Gabriel.
More posts by this contributor

In the novel Desperate in Dubai, Ameera Al Hakawati wrote:

“Dubai is… after all, a lonely, transitory place. It’s hard to maintain relationships when people are always coming and going.”

Two years ago, during my first time in Dubai, I agreed. After attending a UN conference there, admiring the city’s glittering, intergalactic architecture, visiting the Gold Souk and then riding a camel for 30 seconds in the desert, I felt myself searching for something beyond the glamour and sand.

Given that Dubai’s combined expat and migrant worker population is 92 percent of the total number of people living in the city-state, I expected to experience a city deeply rich in diversity beneath its “skyline on crack.” But instead I sensed a society filled with dichotomies and devoid of identity.

During my second visit in February, I felt a shift in the city’s energy and a glimmer of community, largely due to its burgeoning innovation economy. With Dubai making efforts to be the first city fully on blockchain and programs like Dubai Future Accelerators and Accenture’s FinTech Hive grabbing attention, the city’s tech sector is reaching new heights. And with Smart Dubai and His Highness Sheikh Mohammed bin Rashid Al Maktoum, Vice President and Prime Minister of the United Arab Emirates and Ruler of Dubai, prioritizing happiness as part of a citywide transformation, the urban desert is cultivating its own modern renaissance for its citizens.

As for the non-citizens, I’m not so sure. Given the ongoing controversy over the years around the treatment of Dubai’s migrant workers, some activists are questioning whether or not a happiness renaissance will be inclusive or strictly for the affluent and privileged.

According to the Human Rights Watch World Report 2016, low-paid migrant workers in Dubai and throughout the UAE have been subjected to abuses that constitute forced labor while building the country’s magnificent skyscrapers. A number of migrant workers, who are predominantly Southeast Asian and live in slums, reportedly earn as little as AED 700 (£127) a month.

Who will Dubai’s happiness agenda include? Only time and data will tell. 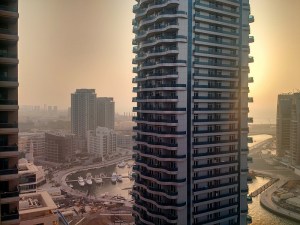 In February, happiness was a key initiative discussed at the fifth annual World Government Summit (WGS) in Dubai, where 4,000 people from 139 countries representing governments, academia and the private sector gathered to dive into global challenges, including climate change, health, education and the rise of populism.

Like most government- and business-focused conferences, there weren’t many women speakers, an issue I hope similar Dubai events address in the future if the city intends to create a culture rooted in happiness. We’ll see if having a woman overseeing the happiness agenda makes a difference. Ohood Al Roumi was appointed as minister of state for happiness a few days before WGS began.

Overall, the role of technology and science in addressing some of the world’s toughest problems was a central theme.

While there was no shortage of nations represented at the event, the UAE and Dubai were (unsurprisingly) in the spotlight. A panel of health experts said the UAE is poised to be the health capital of the world, thanks to its investment in new technology. According to the Future of Health Index 2016, which measured the readiness of citizens in 13 countries to deal with new models of healthcare delivery and treatment, the UAE ranked first.

It’s worth noting that the definition of health capital is subjective. If you’re looking at healthcare affordability, Mexico, Colombia, Costa Rica and Malaysia register with top grades.

As far as healthtech goes, however, the participants at WGS say the UAE can’t be beat. While making this argument, Arjen Radder, CEO of Philips (Middle East and Turkey), discussed a new invention called the bio-center that patients can attach to their to chests to measure eight different vital signs, allowing doctors to monitor their levels remotely. Later, Dr. Shamsheer Vayayalil, founder and managing director of the multi-specialty Dubai-based hospital, VPS Healthcare, spoke about how he’s aiming to turn the healthcare sector into more of a wellness sector, and leveraging technology to see a shift from “break-and-fix” to “predict-and-prevent.”

The future of climate change and technology

For participants who got a chance to break away from the lofty conversations of the event, the Museum of the Future installation, which was organized by the Dubai Future Foundation as part of WGS, provided a vision exploring how countries can be forward-thinking about remedies for climate change. Considering 2016 was the hottest year ever, if governments and tech clusters across the globe aren’t looking into climate change solutions, we’re in trouble.

“The world needs to produce 70 percent more calories by 2050 in order to feed itself,” says Dr. Noah Raford, COO of the Dubai Future Foundation. “This kind of growth is possible, but requires a new approach to the food industry. Growing food closer to home will be an essential ingredient to healthy cities.”

Raford pointed out that irrigation, fertilizer and pesticides increased yields for millions of farmers over the last 50 years. “It fed millions, but also brought pollution, degraded nutrition and energy-intensive supply chains,” he says. “These are bad for the environment and bad for our health. The food systems we imagined in the 2017 Museum of the Future will produce food locally using much less energy and water and with much better taste and nutrition.”

The idea of a desert paradise like Dubai producing its own food is hard to visualize. Then again, imagining a city with all of its documents on blockchain by 2020 and a world that provides a universal income is no small feat. But like its spectacular skyline, the ideas spawned and nurtured in Dubai are never realistic. And the fact that the ideas come to fruition has people coming and going more often — so much more that plenty are staying longer than they originally intended.

Perhaps this means they are happy.