<p class="dropcap">On Valentine’s Day at Soft Robotics in Cambridge, Mass. a staff member places heart-shaped marshmallow Peeps on a conveyor belt. A mechanical arm snatches them up, one by one, setting them gently in a nearby box. It isn’t much of a romantic celebration, really. But it is a triumph of sorts.

Soft Robotics’ RL7 and other grippers can reliably perform some of the physical tasks we do countless times a day but have learned to take for granted. They can pick up a pliable object and put it where it needs to go, all without having to identify the object with computer vision systems, or any kind of pre-programming.

Besides the pink Peeps, the startup’s lab is littered with a bizarre array of objects. There are bags of peanuts and various types of produce on one side, a knockoff Furby and plastic Frozen toys across the room. The lab has the makings of a terrible dollar store, each object chosen for its inconsistency of shape, Soft Robotics CEO Carl Vause acknowledges. But the inventory represents a good cross-section of real-world products, he explained.

Founded in 2013, Soft Robotics’ grippers are already being used by manufacturers and retailers to pick and pack everything from chocolates to injection-molded parts to uncooked pizza dough. The grippers don’t look like a human hand. Instead, they are comprised of a cartoonish quartet of rubbery, bright blue fingers that snap onto their target like an octopus clutching its prey.

The name of the company is a nod to both the soft material used to make its grippers and a sub-category in the larger field of robotics. Vause traces his inspiration for the company back to a 2011 paper co-authored by George Whitesides, now a board member at Soft Robotics.

In it, the Harvard professor details a four-legged, X-shaped quadrupedal robot that looked destined to latch onto the face of an unsuspecting passenger in an Alien sequel. “We are interested in a unique class of robots,” the paper explains. “That is, soft robots fabricated in materials […] that do not use a rigid skeleton to provide mechanical strength. The objective of this work is to demonstrate a soft robot that requires only simple design and control to generate mobility.”

In order to design a soft robot that could both walk and stretch itself through a centimeter gap under a door, Whitesides looked outside the human tribe for biological inspiration. And like other roboticists before them, Whitesides’ team found that inspiration in the ocean.

The final product made the rounds on the internet, courtesy of its impressive ability to walk by undulating individual limbs through inflation and its admittedly creepy visage. That same year, Whitesides’ team applied the design to its first flexible robotic gripper, this time shaped like a starfish.

Suspended by fishing wire and a tube for delivering compressed air, the team demonstrated that the grip was capable of picking up an uncooked egg without crushing it. The team did the same with a live mouse, demonstrating how, with the correct polymer material and air pressure, the hand was capable of securely gripping an object without harming it — an act that would have required a far more complex array of computer vision and sensors in a more rigid gripper.

“We saw that as a breakthrough technology that could bring human-like dexterity in a simple compliant form factor to robotics,” says Vause. “[A traditional robotic gripper] has to know exact location of the object. It has to calculate its path, so there’s a lot of numerical calculation called path planning and then there’s sensors on the fingers, so it has to grasp them just enough, but not too much. So it can be very slow and very tedious to solve this.”

By 2014, Soft Robotics had its first public prototype. In late 2015, the company made its gripper commercially available, attaching these to the end of third-party industrial robotic arms from companies like ABB. 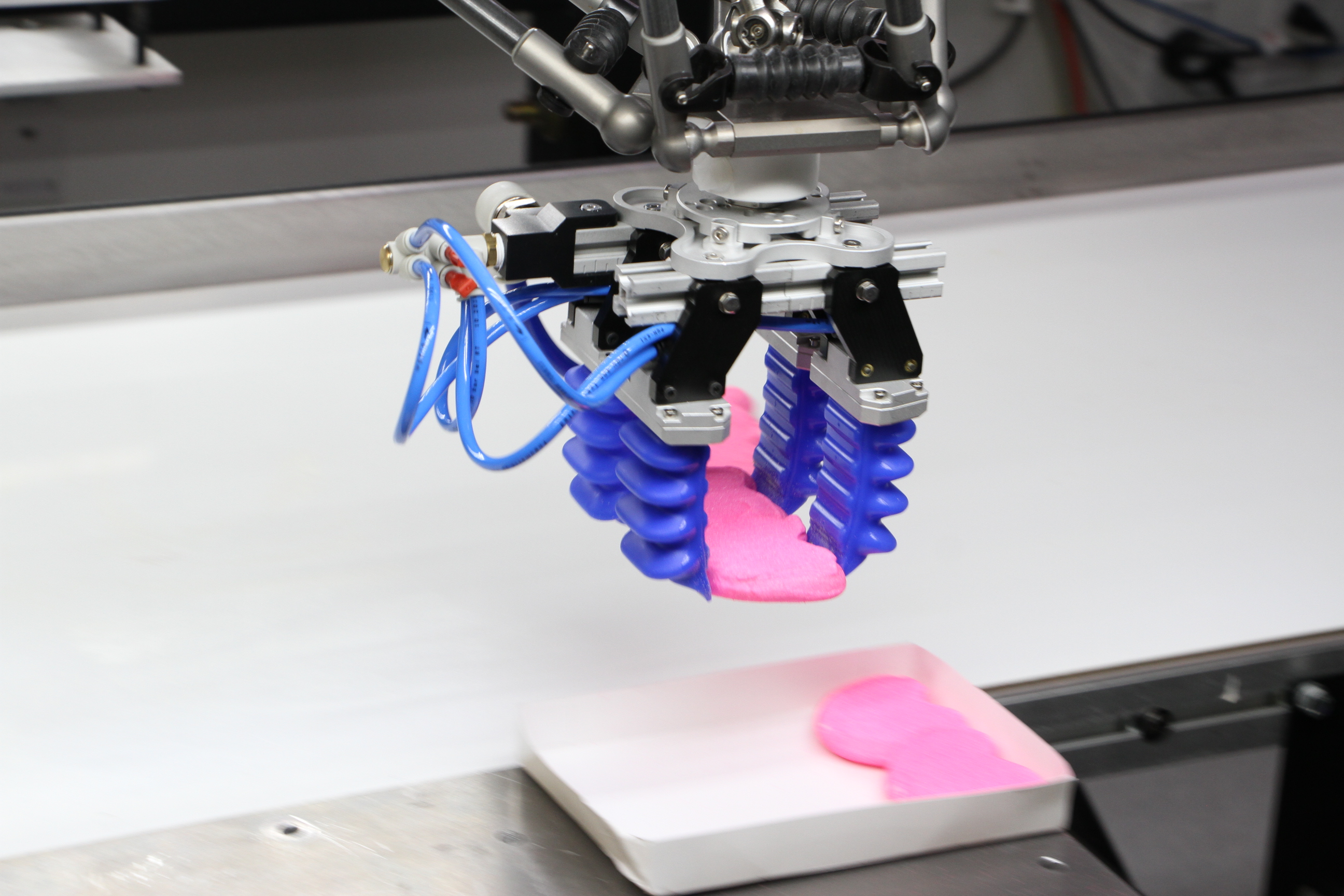 Since launch, Soft Robotics’ grippers have proven most successful in food shipping, an industry where the product rarely adheres to strict consistency in size and shape. It also helps in the food business when your equipment can simply be hosed down at the end of the day.

“When we started, we thought we would look at food in about three years’ time,” Vause said, “but the ability to have cleanable robot systems that can directly handle food was a huge unmet need. So, about 80 percent of our business right now is in food, everything from bakery to produce.”

Soft Robotics wasn’t the first company to bring the technology it’s named after to manufacturing and fulfillment. Founded in 2012, Empire Robotics hit the scene with the Versaball, a gripper based on similar principle, taken to a minimalist extreme. The gripper consisted of a balloon-like ball filled with sand-like granular material. Air is pumped in and out of the object to adjust grip strength. It wasn’t made to pick up food so much as small metal parts that you’d need to get sorted and out to assembly points in a factory.

In spite of the Versaball’s positive press, including a late-night beer pong match against Jimmy Fallon, Empire fizzled. The balloon-like gripper it designed couldn’t endure high-repetition industrial use. The company went quiet in 2016.

Soft Robotics’ cephalopod-inspired robot seems to be gaining traction, however, thanks in no small part to its versatility and minimal set up. Vause said that depending on the products the robot will be handling in a given setting, installers need to choose which type of rubbery fingers to attach and adjust the air pressure used to actuate those grippers. Otherwise, the robot is plug-and-play.

The company has managed to overcome the hurdle of bringing a breakthrough technology from the lab to a commercial application in an industrial environment.

“One of the biggest challenges is, if you think about academic work, you want to get something that runs a couple of times,” explains Vause. “You get your data, you publish the paper, you get on the cover of Nature or one of the great journals. In industry and especially robots, these machines are required to run 24/7, so, millions of cycles a month. Taking a technology that can stand up to that industrial wear and tear was really the biggest challenge.”