Facebook today announced it’s expanding its set of online fundraising tools to include its own GoFundMe competitor, with the added support for personal online fundraisers, starting first in the U.S. The new tool will allow Facebook users to raise money for personal crises and other campaigns — like school or medical expenses, emergency situations, funerals and more. In addition, the company is adding the ability for Facebook Pages to add a “donate” button to their live broadcasts on the network.

This is not the first time Facebook has stepped into the fundraising space. In 2015, it debuted a Kickstarter-like feature aimed at nonprofits that allowed them to set up a campaign page, explain their goals and collect cash. Last year, the company expanded its fundraising tools to allow individuals to collect funds on behalf of nonprofit organizations, as well. 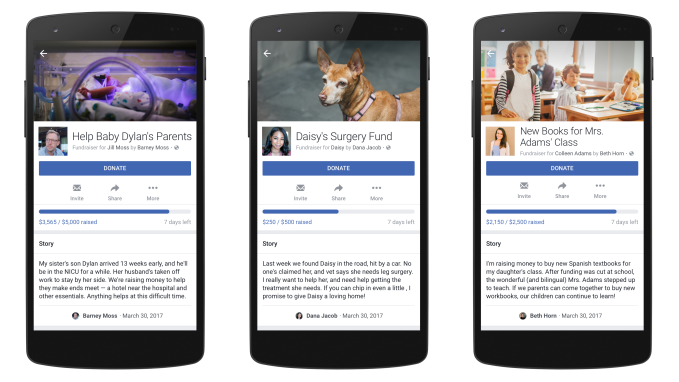 It was only a matter of time before Facebook introduced similar tools to its wider user base, especially given the continued popularity of these sort of online campaigns and the social activity that surrounds them.

The personal fundraisers are also only open to those in the U.S. who are aged 18 or older, and it will first be available in beta.

They will also have will have a 6.9% + $.30 fee that will go to “payment processing fees, fundraiser vetting, security and fraud protection,” says Facebook. (Non-profits pay a different fee structure on Facebook, however). GoFundMe, by comparison, takes 7.9% + $.30 for personal or charity campaigns.

Similar to its other fundraising products, users visiting the personal campaigns can click buttons to invite friends, share the campaign or click the big, blue button to donate money while remaining on the site. This also encourages more payment transactions across Facebook — an area of its business that is still today under-developed, despite the addition of peer-to-peer payments within Messenger.

In addition to personal fundraisers, Facebook Pages will now be able to include “Donate” buttons on their live video broadcasts. This will allow public figures, brands, businesses and other organizations beyond nonprofits to fundraise, too.

People watching the live video can choose to either donate as they watch, or after the video ends and is posted on the Page, says Facebook.

Updated, 12 PM ET to include additional information about the review process; 3 PM ET with fee structures for personal and non-profits.