Evie is bringing its app search technology to a new location on your phone.

The startup has partnered with Verizon (which owns TechCrunch) to launch a new product called AppFlash. Like Evie’s existing app launcher, AppFlash helps users find content and services across different apps — and Evie is working with Verizon to make this the default experience on customers’ Android devices, popping up whenever they swipe to the left of their home screen.

Using AppFlash, you can search or browse through listings of restaurants, movies, music and apps. Then, once you find what you’re looking for, you can jump into a specific app.

So if you’re looking for a specific movie or TV show, you don’t have to open each of your streaming video apps individually — you can just find it in AppFlash, then tap to watch in the correct service. Or you can look at restaurant listings in AppFlash, then open up one app to get detailed information, or another to make a reservation. 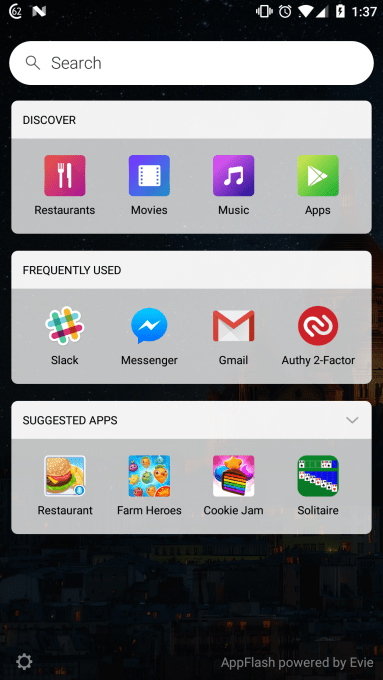 AppFlash also offers universal search across all your apps, and it suggests apps that you might want to open or download. Co-founder and CEO David Zhao said these recommendations take advantage of Evie’s “structured understanding of the content inside of apps” and are based on both context and user behavior.

Plus, the product uses app virtualization technology developed during the company’s previous incarnation as Voxel (which launched at TechCrunch’s Startup Battlefield in 2013). So if someone decides to try out one of the recommended apps, they can play with it for up to a minute without having to download it first, and with no data charges.

Zhao said that while the Evie launcher has been installed more than 1 million times and has been used for 500 million app launches, by working with Verizon to deliver this experience right next to the home screen, Evie is creating “the lowest friction way of complementing existing experiences,” rather than “trying to change the entire experience on the phone.”

T.J. Vitolo, a director of product management at Verizon, added that his priority was making sure AppFlash was something that could be used by a mass audience, for whom this can serve as a way to “drive discovery for lots of services they’re not familiar with.” For more tech-savvy users, he said AppFlash could still be useful as a way to “string together logical app engagements … rather than bouncing from different apps.” 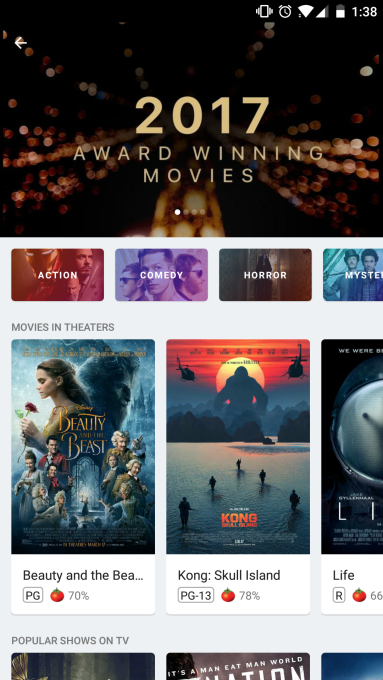 “Ninety percent of our smartphone users love their smartphone and love to get things done — they just want to know how to get them done simpler and easier,” Vitolo said.

The service will be rolling out across Verizon Android devices in the coming weeks. Zhao said AppFlash is the Verizon-branded version of a new Evie product Sidescreen, which could eventually be offered by other mobile carriers.

“We have no contractual exclusivity with Verizon, but they are our first and most important partner,” he added. “We are committed to making this work with Verizon first before other carrier/OEM partners.”

Update, March 31: The Electronic Frontier Foundation argues that this could compromise customers’ security and privacy, partly because of the information collected for ad targeting, but mostly because of “the increased attack surface an app like AppFlash creates.”

“You can bet that with Verizon rolling this app out to such a large number of devices, hackers will be probing it for vulnerabilities, to see if they can use it as a backdoor they can break into,” the EFF writes.

Update, April 2: The EFF now says it has received additional information and is “withdrawing this post while we investigate further.” It also published this statement from Verizon Director of Corporate Communications Kelly Crummey: “As we said earlier this week, we are testing AppFlash to make app discovery better for consumers. The test is on a single phone – LG K20 V – and you have to opt-in to use the app. Or, you can easily disable the app. Nobody is required to use it. Verizon is committed to your privacy. Visit www.verizon.com/about/privacy to view our Privacy Policy.”

Update, April 3:  To add some context here, Zhao initially told me that AppFlash would be “distributed as a default experience on all Verizon Android devices.” However, I did not ask him for more details or confirm this with Verizon — which was sloppy on my part, and I apologize.

In a follow-up email, Zhao told me:

We didn’t quite expect the media to call the app spyware, which is misleading. Unfortunately, folks jumped to conclusions, given the timing of roll back of privacy laws. Our launch is not at all related to the timing of the privacy laws. We value the users privacy and seek the their explicit consent before the app is enabled.
On the deployment plan itself, my apologies if I wasn’t clear on the rollout. Our intent with Verizon is to deploy across their entire Android lineup over time.
The app will be distributed only on new devices. Existing devices will not have AppFlash automatically installed. LG K20 V, which went on sale last week, will be the first device it’s shipped on.

I also reached out to Crummey, who repeated her previous statement and added, “There is no agreement at this time to expand AppFlash across our portfolio of devices.”