With yesterday’s release of iOS 10.3 and macOS 10.12.4, Apple has made a significant change to how its App Stores operate. At long last, developers now have the ability to respond to user reviews in order to offer support, ask follow-up questions, say thanks, or otherwise interact with their app’s customers. The change has been a long time coming – the feature has been standard in Google Play since 2013, and a huge headache for Apple’s developer community over the years.

Not only was the prior system a sore spot for developers, it was bad for consumers, too.

If an app crashed on you or had some sort of weird bug, you might head over the App Store to leave a complaint. This was often easier than trying to track down the developer’s contact information, especially because many publishers don’t include an email address or support information in their App Store description. 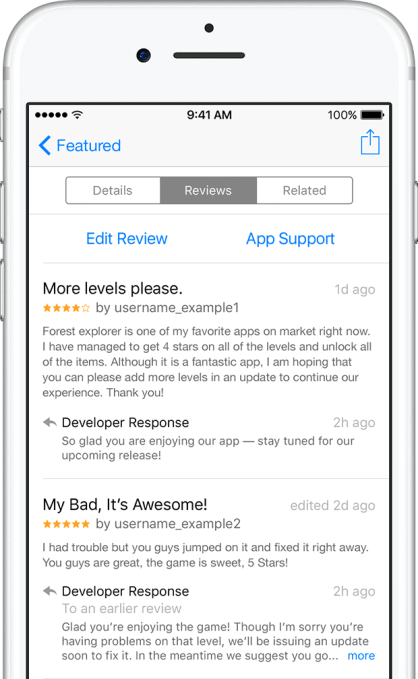 Those complaints could help developers identify new bugs or other previously unknown glitches, yet there was no way to reach out to the user to ask follow-up questions that could help them address the situation and create a fix.

Some developers would even try various tactics to try to identify the user in question, simply to be able to ask more for information – like reverse engineering a UserID to figure out which email was associated with the user’s account, for example.

Finally! I use to have to reverse engineer their UserID to determine email for comments a crash in our app that we were desperate to debug

In addition, the lack of a review response system also prevented developers from fostering a sense of community around their apps. They couldn’t respond to feedback about feature requests to explain their thinking, talk about where that feature was on the roadmap, nor could they thank users who shared kind words.

Being proactive by responding to issues that need addressing isn’t just about developing better software – it can also impact the developer’s bottom line.

When users feel the developer is paying attention and being helpful, they’ll likely rate the app higher. Better rated apps will see more downloads, and then move up the charts on the App Store. 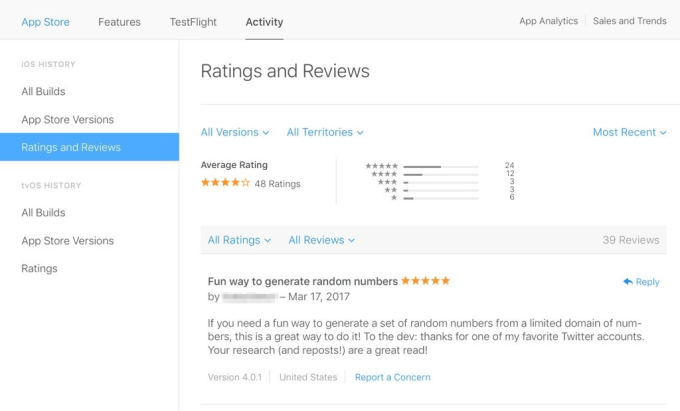 With the launch of the new feature, Apple offers a series of suggestions about how developers should respond to reviews. It explains that timely, clear and concise answers are best, and they should reflect the tone of the brand – even if multiple people write the responses. The company also suggests that developers should prioritize those reviews with lower star ratings, for obvious reasons.

The users’ reviews appear iTunes Connect, the dashboard where developers manage the apps they offer for download on the App Store. A page will display the incoming reviews, allowing developers to now respond or report them. (Under App –> Activity –> Ratings and Reviews).

There are also filters for finding reviews from users in different countries, which can be helpful for triangulating reviews for versions just rolled out to new markets.

Developer responses appear to go through a process of their own, MacStories discovered. (See below tweet). Some developers are seeing responses marked as ‘Pending,’ for instance.

🤗 Confirmed: you can use emoji in your iTunes Review developer responses! What a time to be alive!!! pic.twitter.com/oXSD7HZAL1

For consumers, the process of leaving a review hasn’t changed, if in the App Store itself.

However, developers have gained a new option for soliciting reviews in the app itself. By using the SKStoreReviewController API, developers can ask you to rate or review an app while you’re actively using it, without being redirected to the App Store.

This will have a bigger impact in terms of collecting ratings and reviews from a larger audience, as many people dismiss the nagging review prompts today. 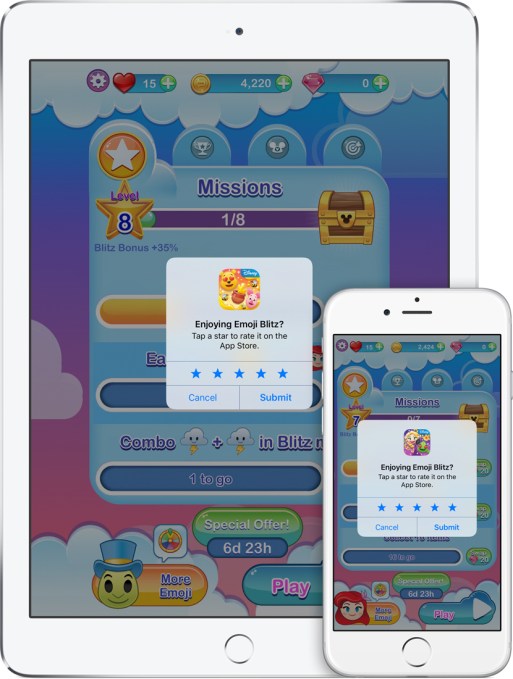 Even better, the API restricts developers from asking for reviews more than three times per year, which will have a huge impact on user experience. Some apps (Tinder comes to mind), literally ask their users for a rating at some point during every single use. And once reviewed, the prompts can’t reappear.

Unfortunately, the option to completely disable review prompts for all installed apps, as promised is not appearing in the updated version of iOS, as it had in the beta.

We understand that this feature was actually pulled out early on in the developer betas, however, and will likely return in time.

The idea here is that Apple wants to give developers a grace period to implement the new API, so until that period wraps, the user-facing “disable” setting will not be available.

Another new feature for users are email alerts that arrive if a developer responds to your review. Following the answer from the developer, the email includes further prompts with links: “Do you want to update your review?” and “You can also contact the developer.”

Users get email if developer responds to review. And an option to update the review! pic.twitter.com/aOVnDFz8i6

In the App Store itself, the responses are clearly labeled with arrows and the heading “Developer Response,” eliminating any confusion.

The reviews and responses are also timestamped, which is another means of seeing how quick the developer is handling incoming complaints. Only one response can be associated with any review, but developers are able to edit their answers, Apple notes.

Plus, users can now use 3DTouch on a review to mark it as Helpful or Not Helpful. 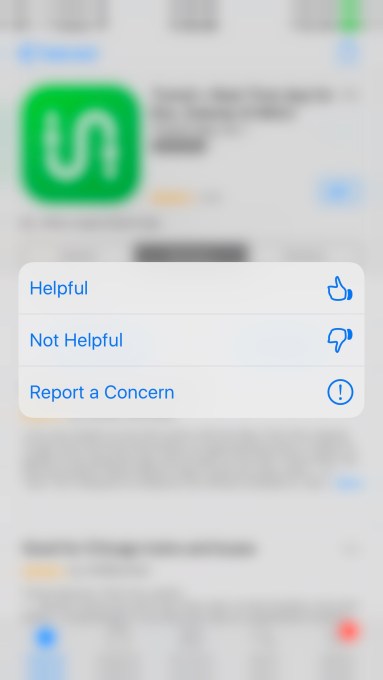 One minor complaint is that the links a developer might provide – like to a support page or FAQ, for example – are not functioning URLs. (See screenshot below).

This could make replies more time-consuming for developers who now have to type out instructions that are already on their site, and users won’t be able to click the links directly.

Seeing my review replies from ~8hrs ago hit public. I kinda like how this looks. pic.twitter.com/DbtsoXTuyF

Developers are thankfully forbidden from manipulating reviews or incentivizing feedback, per Apple’s App Store Review Guidelines. The company clearly tells developers not to “offer users an incentive to change their review ratings in your responses,” as a means of keeping the review system honest.

Certainly some developers will try to skirt this system, so it should be interesting to track how Apple handles those in violation.

Yesterday, Apple released new versions of its operating systems and an updated version of iTunes. You’ll only see these changes if you’ve upgraded your Apple software to the latest version.