It’s been just about a year since Google unexpectedly announced the first preview of Android Nougat. Today, the company is launching the first developer preview of the next version of its mobile operating system, currently code-named Android O (but we’re really hoping it’ll become Android Oreo once it’s released).

One major difference between the early Android N and O previews is that Google immediately made over-the-air updates of Android N available to anybody who wanted to give it a try (and those early releases were surprisingly stable and functional). This time around, it’s not launching the new release into the Android Beta channel right away. Instead, developers who own a Nexus 5X, Nexus 6P, Nexus Player, Pixel, Pixel XL or Pixel C device (or want to use the emulator) will have to manually download and flash their devices. After a bit more testing with developers, Google will open enrollment into O through Android Beta.

“For this release, we wanted to focus on giving developers time to test for compatibility, explore new features and send feedback which will help make Android O a great platform,” a Google spokesperson told me when I asked why the company wasn’t releasing this version in the Android Beta channel. 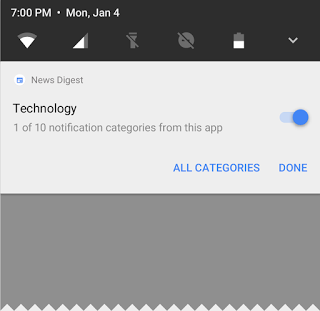 As far as new features go, Android O is likely to be a bit of a letdown for many. At least for now, we’re not talking about a major UI refresh, for example. Instead, Google continues to tweak many of the operating system’s core features. Here are a few of the most interesting updates:

Picture in Picture: Android O video apps will be able to put themselves into a Picture in Picture mode so that video will still play after you switch to a different app (similar to what YouTube does when you press the back button while you watch a video).

Multi-display support: This one is interesting, and one of the many new features that seem aimed at both new kinds of devices and Android on Chrome OS. With this, developers will now be able to launch an activity on a remote display.

Background limits: The last few Android releases put a heavy emphasis on improving battery life. Android O adds to this by putting automatic limits on what an app can do while they are in the background. These limits focus on three areas: implicit broadcasts, background services and location updates. For developers, this may actually be the most far-reaching of the new features in Android O and Google explicitly notes they should check out its documentation about these changes.

New Wi-Fi features: Wi-Fi may seem like an old hat, but Android O is adding support for a few (relatively) new connectivity features. The updated OS will support more Wi-Fi Aware features like Neighborhood Aware Networking (NAN), for example. NAN makes it easy for apps and devices to talk to each other without an internet access point in the middle (or any internet connectivity at all). Google says it is working with partners to bring support for NAN to devices “as soon as possible.”

Better interop for calling apps: Android O will make it easier for calling apps to talk to each other and make calls over the carrier network. Developers will now be able to use the new Telecom framework to build their own UI for placing calls and calls will be displayed and controllable via Bluetooth devices with displays like you’d find in a car. For the most part, this looks like a feature the telecoms will be happy about but that won’t matter all that much to users.

There are obviously a few other new features and tweaks here, as well. Those include adaptive icons (similar to what you’ve seen on the Pixel), support for wide-gamut color capable displays, support for high-quality Bluetooth audio codecs (which may mean Google, too, is about to ditch the headphone jack on its own phones), a new native audio API, better font support and an improved WebView that has multi-process mode enabled by default.

Google also notes that Android O will support a number of new Java Language APIs and that the Android Runtime is now significantly faster, with some benchmarks seeing a 2x improvement.

For the most part, these updates aren’t earth-shattering, but it’s worth keeping in mind that this is a developer preview and we’ll likely see quite a few new features pop up before the public launch.

Like last year, Google promises it will do a deep dive on all things Android at its I/O developer conference in May. If the company follows the same release schedule as last year, we’ll likely see the first consumer devices with Android O at a Google hardware event in October.

Android Nougat two releases are currently installed on 2.8 percent of all Android devices and many users (more than 65 percent) are still using pre-6.0 releases. To some degree, it’s starting to feel as if Google is now developing Android for its own devices first, especially given that the first devices to launch with O(reo) pre-installed will likely be Google’s own again, too.