Ken Miller Contributor
Ken Miller is a technology partner at the Omidyar Network. Previously he was an executive at PayPal and Intuit, and early Board Advisor to Square.
More posts by this contributor

Studies show that America’s trust in the media is at an all-time low, and has been trending lower for more than a decade. And though it’s been an ongoing topic and issue for several years, growing distrust in the media has accelerated so abruptly that the situation now borders on alarming. Not helping matters has been the dizzying pace of attacks by our new president, whose assault on the press has intensified to such a height that he recently even referred to the news media as the “enemy of the American people.”

To quantify things, a September 2016 study released by Gallup showed that only 32 percent of Americans said they trusted the media. This was down from 40 percent a year earlier and 50 percent in 2005. In the late 1990s and early 2000s that figure generally hovered in the low-to-mid- 50s. But is it really all Americans that increasingly distrust the media? Well, not exactly. Gallup further broke the figures down by political party, revealing some telling results. 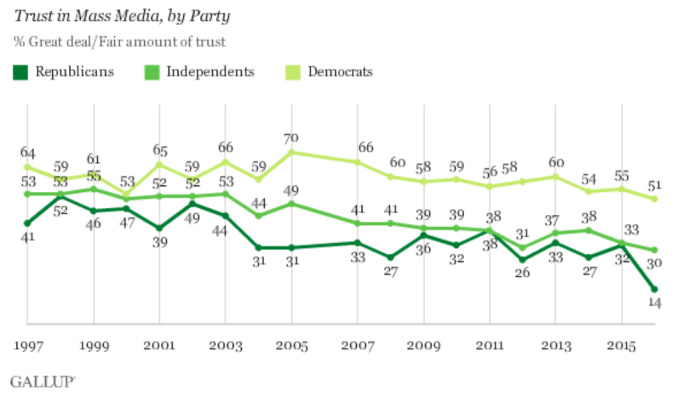 In 2000, Republicans, Democrats and Independents were all within six percentage points of one another in terms of their trust in the media, ranging from 47 percent to 53 percent. But since that time, figures for both Independents and Republicans have been declining, with Republicans generally declining at a sharper rate. And 2016 saw the steepest drop yet for Republicans, sinking all the way to 14 percent.

To understand how this might have happened, it’s helpful to look at the evolution of where Republicans have been consuming their news. Examining the initial declines in 2003-04, you see that those drops happen to coincide with two different, but significant and related events — the first being the attacks of September 11, 2001, and the second being the launch of several hyper-conservative long-form talk radio programs in a compressed period.

Prior to 9/11, Rush Limbaugh had ruled the national talk radio airwaves for a decade. But after Rush (and to some extent Dr. Laura Schlessinger), most of the other top performers were the likes of morning show personalities like Howard Stern and Don Imus.

But once the nation was attacked, American citizens found themselves immediately ravenous for any minute-by-minute nugget of news and information they could get their hands on. Any sliver of potential information or even just speculation was welcome, particularly by those listeners who spent long periods of time commuting or even driving a vehicle for a living. They also found some solace where talk radio programs often served as an outlet to voice their own opinions and anger.

Regional hyper-conservative radio personalities took note and quickly stepped in to fill the void. Michael Savage, Laura Ingraham, Sean Hannity and Glenn Beck proved to have impeccable timing as they all launched nationally syndicated programs right before, during or after September 2001.

Mark Levin soon followed. These political shock-jocks all seized the moment… extending their arms wide open to pull in a large contingent of listeners who were angry and vulnerable in a confusion-filled post-9/11 world. Their audience ratings soared (even as other radio listeners began returning to old habits), and by 2008, those five had joined Rush as the top six talk radio programs in the entire country (for any and all formats, not just political programs). 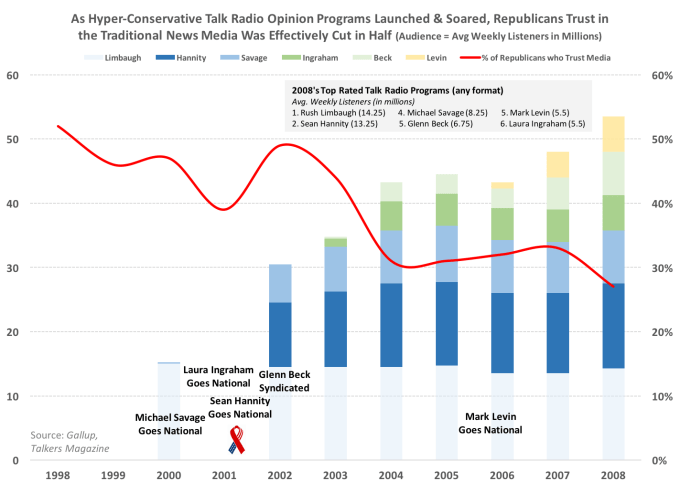 Besides a pursuit of higher ratings, these six personalities also shared in common a drive to discredit and marginalize standard news reporting. And with a growing, captive audience of tens of millions of listeners, radio proved to be a perfect medium in a post-9/11 setting to deliver this message and codify a malleable audience. Examples of some of the anti-press approaches include:

The historical significance of amplified terrorism concerns following 9/11 as a defining and changing moment for media consumption has likely been under-appreciated to date. Not only had this group of radio talk show hosts become successful in dominating the national political dialog on radio, but two of them (Hannity and Beck) also found significant success in television as hosts of their own Fox News programs.

Not coincidentally, the reasonably new (at the time) Fox News saw its audience and market share numbers swell in the months and years following the attacks. In fact, Fox News took over the No. 1 position among cable news providers just two months after the attacks. It was during that time of the early 2000s that Fox News began providing a televised platform and tacit endorsement for the extreme conservative rhetoric that was simultaneously taking over the radio.

And much like conservative talk radio’s explosion onto the scene, declining trust in traditional media and Fox News ratings growth have seen a co-dependent relationship. 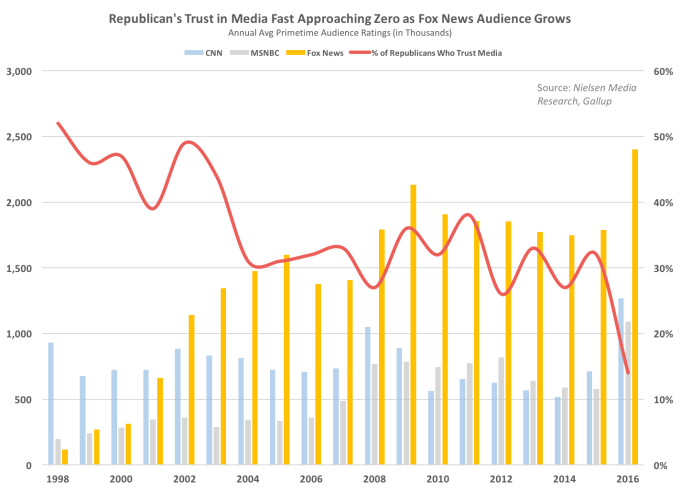 While a reputable news provider, Fox News channel seems to have purposefully over the years blurred the lines between opinion and news programming. This has resulted in viewers being told by what they deem to be a news source that other news sources are not legitimate.

But reliance on a single source for information, while increasingly pushing away other sources, can in turn disproportionately affect voting patterns. In 2016, for instance, 40 percent of all voters for President Trump reported that Fox News had been their primary source of news for the 2016 campaign. 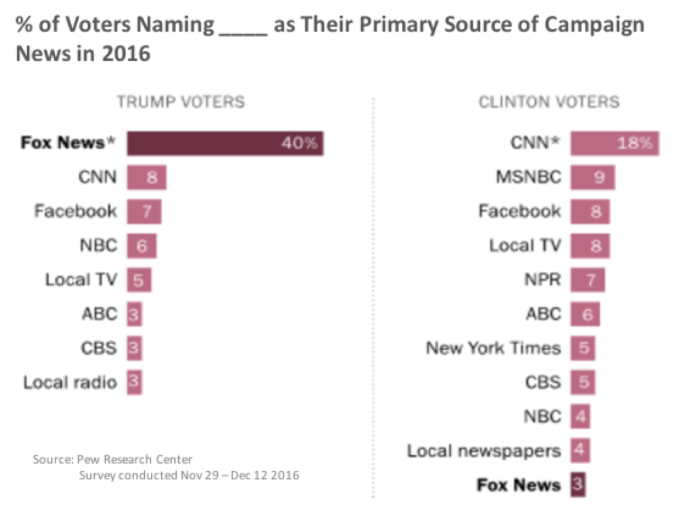 In addition to television, Fox News has also generally been the leading source for conservatives and Republicans for information online. That is, until this past election season. A fascinating study earlier this month by the Columbia Journal Review (CJR) analyzed the sharing of 1.25 million election-related stories across Twitter and Facebook.

In the study, they specifically looked at patterns related to readers sharing all 1.25 million stories and how that correlated to which of those readers were also sharing posts from Donald Trump or Hillary Clinton.

One of the most interesting discoveries in their data is the finding that in 2016, Breitbart.com (a hyper-conservative website previously run by current White House Chief Strategist Steve Bannon) had effectively displaced Foxnews.com as the center of gravity for where most on the right side of the political spectrum consumed political information online. Breitbart — which Bannon described during an interview last summer as the “platform for the alt-right” — is beloved by its readers for producing headlines such as “Gabby Giffords: The Gun Control Movement’s Human Shield.”

Taking the top eight websites from their findings (there were eight whose volumes far exceeded the rest of the 25,000 publications they looked at) and mapping them to changes in website traffic over the last 15 months, you quickly get a striking picture of a significant audience shift that occurred. A change that likely further contributed to that crash to 14 percent in Republicans’ trust for traditional news. 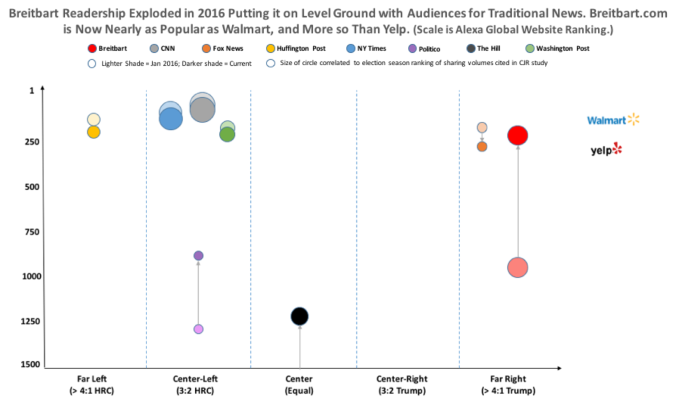 Going into 2016, Breitbart was the 1,000th most active destination on the internet. But things changed in a hurry during the course of the year as traffic to the site skyrocketed, and the “Would You Rather Your Child Had Feminism or Cancer?” publisher has now become the 42nd most popular website in the United States and the 231st most popular website on the planet. To put that further in perspective, that would make Breitbart’s site more popular than Yelp and fast approaching the likes of Walmart.

Breitbart has aggressively put traditional news organizations in their crosshairs, while simultaneously convincing their audience they are a news organization themselves (their actual name is even Breitbart News Network) . Likely in a quest to grab the right-wing pole position, in 2016 they even went so far as to add Fox News to their bullseye, referring to them at one point as the Anti-Trump network.

But regardless of any jockeying among conservative publications, the goal now looks to be a mission nearly accomplished.

In just a short 15 years — and with only 14 percent of Republicans left still holding out — the collective effort of conservative right-wing radio personalities paired with a soaring Fox News, and now Breitbart, has managed to convince much of an entire major political party to trust only them.