Breaking into the App Store can be difficult enough, but for small-time mobile game developers it’s even more of a challenge as they go up against billion-dollar, global publishers that dominate the top charts, like Supercell, Activision Blizzard, Niantic, EA, Tencent and others that can afford to invest millions in marketing budgets and advertising. Apple is now hoping to level the playing field a bit by giving indie games a new and highly visible home on the App Store.

Throughout the week, Apple has been highlighting indie gamer content in a dedicated section on the App Store’s home page, where it often features new releases, favorites, staff picks and other recommendations.

This hub, dubbed “Celebrating Indie Games,” includes a number of new releases and debuts from independent game developers, but also some of the best, all-time titles for iOS gaming. Further down the page, indie games are further broken down into category spotlights — like lists of those with “incredible sound design” or “unforgettable stories,” for example.

The selections were chosen by the App Store’s Editorial team, and include a mix of both paid and free-to-play titles. 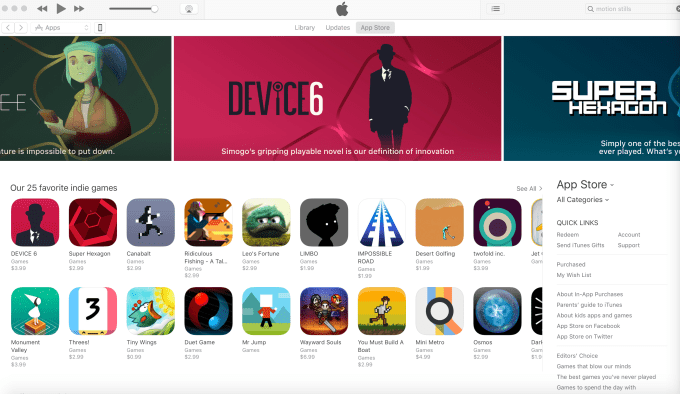 Initially, this collection appeared to be just another promotion meant to give indie titles a push. Apple often hosts featured collections like this on its App Store in order to showcase new releases, interesting apps and other exclusive content.

The launch of the hub was preceded by other promotions of indie games, including discounts and other prominent placements for new, indie releases. Apple said it would be highlighting indie titles throughout the month, from March 9th through 20th.

However, according to a tweet posted on Thursday by the App Store Games Twitter account, the indie games hub will be a permanent installation on the App Store after the promotional period wraps. In March, Apple suggested it’s refreshing the content in the indie hub daily, but presumably that pace will slow when the “Celebrating Indie Games” push ends.

For indie developers — that is, those that are small, self-published and self-funded, according to Apple’s definition — the change could greatly impact their discoverability on the App Store. A dedicated section for finding these titles offers developers a way to get in front of potential new users, without having to pay for App Store Search ads, or other ads on sites like Facebook.

The promotional efforts seem to be working. Currently, titles like Botnicula, Surgeon Simulator and Prune — all of which are being featured in the new hub — are sitting high on the App Store’s Top Paid Apps chart at No. 7, No. 1 and No. 5, respectively.