The plot thickens, but doesn’t it always?

One invoice form dating back to 2015 shows payments to Flynn made by three Russian entities: $33,750 from state-sponsored news source RT TV, $11,250 from Volga-Dnepr Airlines and $11,250 from Kaspersky Government Security Solutions, Inc. 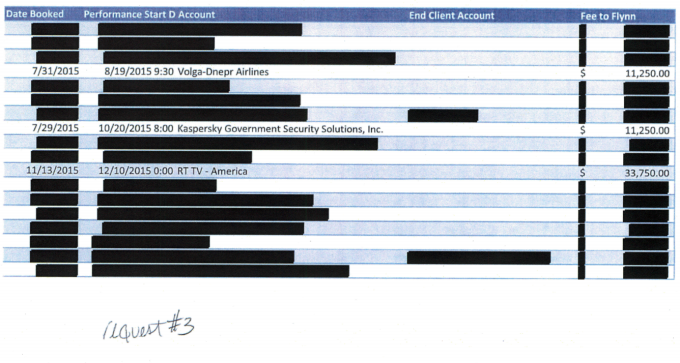 According to its website, the U.S. arm of Kaspersky Lab “designs, implements and delivers holistic cybersecurity services and solutions for the U.S. government, U.S. government contractors and the U.S. National Critical Infrastructure sector.”

In response to the revelation, Kaspersky Lab stated that it paid Flynn the amount as a speaker fee for his appearance at the Government Cybersecurity Forum in 2015. As Business Insider reports, the event’s other keynote speaker, U.S. Rep. Michael McCaul did not receive a payment to speak at the event.

Kaspersky is one of the most prominent names in cybersecurity, but the firm has faced scrutiny in the past over founder Eugene Kaspersky’s speculated ties to Russian intelligence agencies. According to the company, Kaspersky Lab “has no ties to any government, but the company is proud to collaborate with the authorities of many countries, as well as international law enforcement agencies in the fight against cybercrime.”

The documents were published today by the House Committee on Oversight and Government Reform, accompanied by a letter from ranking Democrat, Rep. Elijah E. Cummings.

“I cannot recall any time in our nation’s history when the President selected as his National Security Advisor someone who violated the Constitution by accepting tens of thousands of dollars from an agent of a global adversary that attacked our democracy,” he wrote.

As a result of his involvement with Russia, Flynn’s remarkably brief 24 days in Trump’s cabinet have already come to a close, but Flynn could still face consequences from rules designed to prevent retired officers from receiving payments from foreign governments.