Wall Street could finally be ready to accept that model and the long path to profitability that tends to be part and parcel of this approach.

Frank Dickson, an analyst for IDC who covers the Identity Access Management (IAM) space, thinks that Wall Street will like the eye-popping growth numbers, in spite of the losses we are now used to seeing from SaaS startups as they grow the business.

That was the good news. The bad news was the red ink, with Okta reporting net losses of $59.1 million for fiscal 2015 and $76.3 million for fiscal 2016. Perhaps Wall Street takes a kinder look toward these kinds of losses today — given the recent Snap IPO and other big-name loss-making listings — than they did, say, in 2014, when Box announced it was going public.

Dickson believes it does. “The cloud may have been difficult to explain at one time. That has changed. Security professionals and IT professionals as a whole are much more accepting of the cloud as the vast majority of all businesses has some part of their infrastructure in the cloud now,” he told TechCrunch. 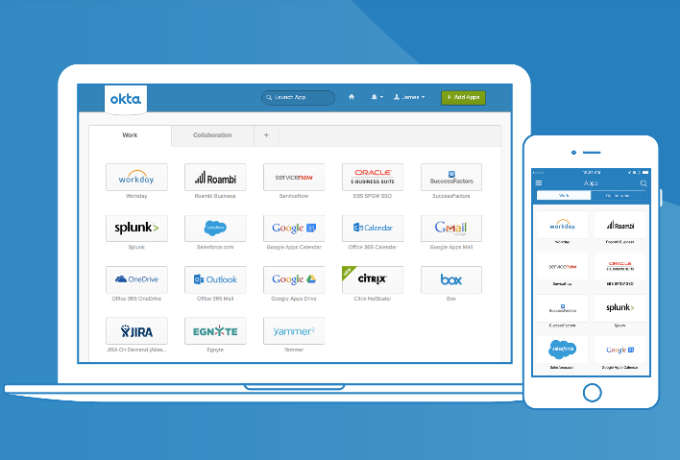 Regardless, not all SaaS companies are created equal, of course — they just happen to use the same business model. Okta, for its part, wants to be the identity access layer for the cloud. While it is certainly not the only thing it does, Okta’s core service offering and its primary value proposition remains providing single sign-on for the cloud.

All of us face the drudgery of signing into multiple apps, cloud services and web sites as we move between mobile devices and computers. When you are working for a business with potentially hundreds of such identity gates, having just one greatly simplifies your life. That’s what Okta is offering in a nutshell, and, according to the S-1, it provides this service for more than 2 million users.

Andre Durand, founder and CEO at Ping Identity, a fellow IAM company that was sold last year for $600 million to Vista Equity Partners, a healthy exit itself, said that Okta’s filing is further evidence that theirs is a thriving industry.

“Look, it’s a good sign of health for a sector when there is activity in positive financing. Those of us who have been in the business for some time and seen the importance and centrality of identity [understand] that it has resulted in the success of Okta and us and others,” Durand told TechCrunch.

Dickson adds that, as we move to the cloud, identity becomes even more important, and finding ways to authenticate identity as we move across systems and platforms is becoming ever more paramount. “The identity business is growing up. We have finally accepted the reality that perimeter-based security approaches are insufficient by themselves. Identity management has become the central component to security,” he said.

But in spite of the clear need for such a service, there are other potential pitfalls for an IAM business, which Okta fully acknowledged in the Risk Factors section of the S-1. One of the more interesting ones was that it didn’t control the underlying systems it was responsible for logging into, and if a company were to switch to a non-standard way of logging in, this could have an impact on the business.

This could be a nod to a spat that Okta had with Microsoft in 2014 when it was initially disinvited from a Microsoft conference, and eventually allowed to participate. At the time, Business Insider reported that Microsoft reasoned that Okta was a direct competitor in mobility solutions space.

In fact, one person who spoke on background for this story believed this was the reason for the clause. “I think that clause speaks to what Microsoft could do to their business if they turned off Office 365 or made it difficult for Okta,” this person said. Needless to say, Office 365 is bound to be a crucial business for any cloud vendor like Okta because of its sheer size, and losing that business would have a significant impact.

Andras Cser, an analyst with Forrester, says all IAM vendors face this risk to some extent, and although standardization tends to work against this approach, there is no guarantee that one of the bigger companies won’t take matters into their own hands.

“IAM solutions inherently support third-party, heterogeneous business software (on-prem, SaaS, etc.) with single sign-on and provisioning. But as the number of these supported software apps increases, the question arises: can the vendor keep up?,” Cser wondered. It’s a question Okta will need to answer in the years to come.

It’s important to note that Okta raised more than $228 million on a $1.2 billion unicorn valuation. It has more than 2,000 customers today, and interoperability in the cloud is a big selling point. Okta offers that ability to move between cloud services, and it boasts partnerships with companies like AWS, GSuite, Box and Workplace by Facebook.

Whether or not all of their strengths translate into a successful public company is impossible to say, but on balance the company is offering a useful set of services for a modern approach to computing and software, using a subscription model with all of the advantages that go with generating recurring revenue.

As Box CEO Aaron Levie says, Okta is part of much broader shift to cloud services. “Enterprises all around the world are looking to replace their legacy software with best-of-breed cloud platforms, and Okta has been a massive part of this movement,” he said.