Before anything else, no, it’s not an alien spacecraft. It’s one of India’s.

Still here? Good, because this is still super cool.

If you want to find the exact location of something orbiting the moon, just looking with an optical telescope is difficult, because the moon is so bright it overwhelms the view of any object passing in front of or nearby it. Radar doesn’t mind, of course, but at distances of hundreds of thousands of miles, it’s better at finding things like the moon itself, not car-sized objects in its orbit.

NASA uses giant radar dishes to detect things like asteroids millions of miles away, and it’s pretty easy to track satellites in Earth’s orbit, but there are awkward middle distances that aren’t so easy to monitor. Lunar orbit is one of them.

But because using terrestrial radar to find and track satellites, spacecraft and other objects that have gone dark (or are naturally so) would be handy, NASA researchers made it work anyway.

Using a pair of large antennas, one in inland California and another in West Virginia, the JPL team blasted microwaves at areas near the moon where they expected each of a pair of dead satellites would be. (Their missions have ended but they don’t disappear when that happens.) 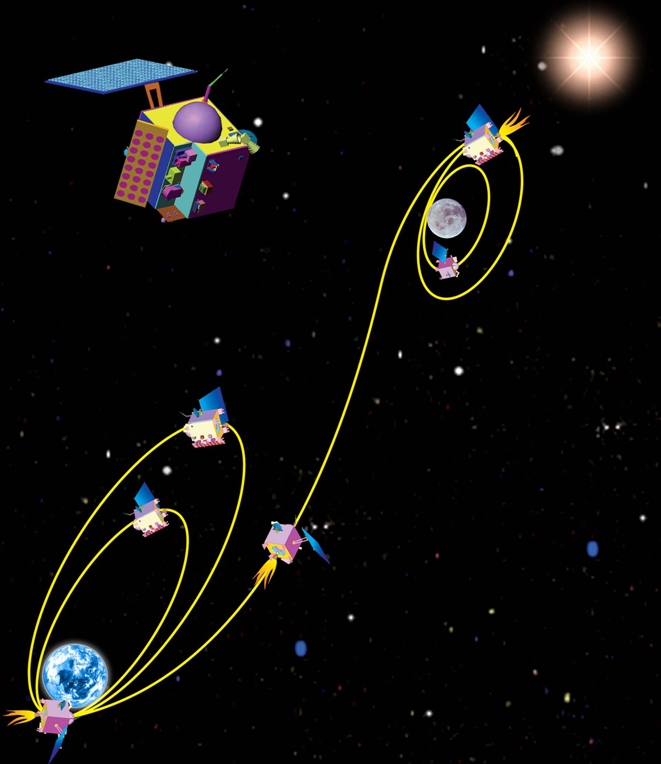 Chandrayaan-1’s orbit profile. But after a few more trips around the moon, who knows where it might have gotten to?

“Finding LRO [the Lunar Reconnaissance Orbiter] was relatively easy, as we were working with the mission’s navigators and had precise orbit data where it was located,” principal investigator Marina Brozovic said in a JPL news release. “Finding India’s Chandrayaan-1 required a bit more detective work because the last contact with the spacecraft was in August of 2009.”

That meant they had to extrapolate its current position from its last known one — and a lot of things can change over 8 years of orbit. Micrometeorite impacts could send it one direction or another, or it might have been affected by one of the many mass concentrations, or mascons, that exert extra gravitational force. As it turns out, Chandrayaan-1 — which is only the size of a small car — was on orbit as expected, but on the exact opposite side of the moon they thought it would be.

Both craft were tracked from Earth over a period of months to produce updated orbital predictions — which can now be used should future missions wish to avoid or recover them. Pretty awesome, right?