The Latch R, which is going up for pre-order now, is a reader-style electronic access product designed for areas such as apartment entrances, office glass doors, turnstiles and elevators — so basically places where Latch’s existing smart lock, the Latch M, is not appropriate.

So while the Latch M works with mortise locks — and includes a physical handle and slot for an actual key, for people who prefer the traditional key-in-hand route to gain entry — the Latch R enables purely electronic entry — either by tapping a mobile or key card or tapping in a code on its touchscreen.

The electronic entry device also has an on-board wide-angle camera for monitoring and managing guest entry. It can be used in combination with the Latch M, or as a standalone entry system. 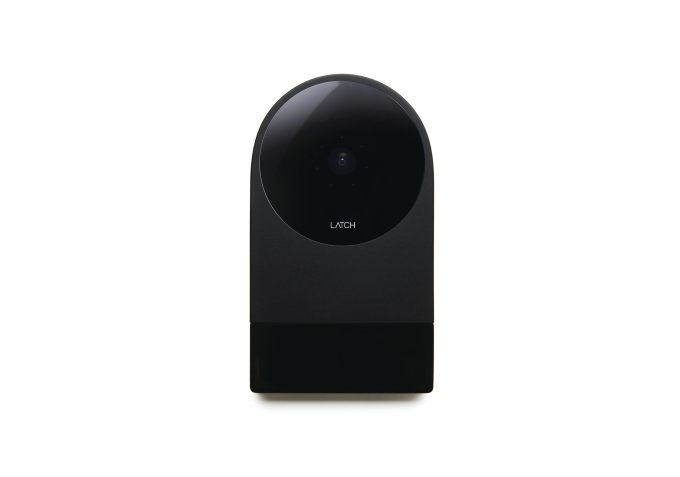 The R is wired into the building’s network for power, and has on-board Wi-Fi, Ethernet, Bluetooth, and Wiegand for comms — its variety of radios enabling it to function in buildings that don’t have, for example, a Wi-Fi network to run electronic access. It can just be run locally via Bluetooth, if needed.

Latch says pilot installs of the R are happening now, with full availability slated for this summer. Pre-order pricing is $399 per lock, plus a two-year service contract.

Latch’s SaaS pricing varies, depending on contract length and features, but co-founder and CEO Luke Schoenfelder says it works out at about $3-$5 per apartment per month.

“We’ve been shipping the M since January and the R now opens up a whole new set of buildings/contexts/doors/services,” he tells TechCrunch. “In 2016, all of our [pilot] buildings had mortise locks installed on the entrances and apartment doors, but we couldn’t install anywhere that was electronically controlled (like glass doors) and now we can.

At this point, as Latch kicks off marketing messaging around a “complete access system” (based on combined use of its two smart entry products), it has “hundreds” of its M locks installed in apartment buildings in its home turf of New York. (Although Schoenfelder says “thousands” have shipped, noting there can be an installation lag as locks are going into new builds and/or remodels.)

Specific installations to date include Corigin in NYC (with Latch retrofitting their entire portfolio); a 251-unit condo project with Onex and Related Management; and The Grand at Skyview Parc in Flushing — a multi-million dollar condominium development.

Schoenfelder says it’s preparing to ramp things up this year by expanding to other “major metropolitan areas” in the U.S. — name-checking LA, Miami, SF, Chicago, DC and Boston as incoming. “We will have local support and installed units in all of those cities in 2017,” he adds.

The sales pitch to building owners is an upgraded digital entry system that Latch claims is cheaper to run/maintain versus legacy electronic entry systems, and which also allows them to offer their tenants additional services, such as the ability to give out access codes to delivery companies or use key cards to gain keyless and mobile-less entry to an in-building gym.

“We’ve been live with Amazon deliveries at our buildings since last summer and people can receive packages at their apartment buildings and get it delivered inside the lobby without having to be home,” he notes, giving one (on-demand and doubtless in-demand) example that building owners can sell as a benefit to tenants. The business model is entirely B2B so tenants themselves don’t pay anything directly.

“[Buildings owners] already have a lot of costs with managing keys and cards and so we actually save them money and add major features for them,” claims Schoenfelder. “They get more in rent by having our products installed because now if you’re a resident you can share access with your friends, family, cleaners etc. without having to be home.”

“We’re actually very cheap relative to market,” he adds. “Prices have been kept artificially high for these products because of monopoly players controlling market. The existing market just in apartment buildings in the U.S. is over a billion dollars ever year. Locks have to be replaced every 5-10 years, either way. And there are 35 million apartments in the U.S. We keep financials close to the chest, but the numbers are actually very very attractive.”

On the competition front, while a lot of the early smart lock players have expended a lot of effort trying to convince consumers to shell out to put their doorknobs on the internet, Latch was quietly honing its enterprise focus (working for a long time in stealth), and getting relevant safety and security accreditations so it can install its kit in buildings. As a result, it says it’s not worried about U.S. rivals like August Home.

“We don’t have startup competitors,” claims Schoenfelder. “August is who everyone thinks about but they can’t sell into this market… wrong lock type and they don’t have any of the required safety or security ratings. Our competitors are all massive lock companies (mostly in Europe),” name-checking Sweden’s Assa Abloy as “our number 1 competitor.”

The other big competitor, of course, is inertia — given that upgrade cycles for building infrastructure can run to multiple decades. But even here Schoenfelder reckons the team is skating to where the puck is going.

“Historically the U.S. has been more suburban and now re-urbanization is changing the game,” he argues. “We are betting on demography. We’re fighting the status quo. We’re in the early innings, but we’re winning.”

Latch, which was founded back in 2013, has raised some $16 million in private funding to date, with investors including Lux Capital.