The Tivoli Audio Model One Digital packs modern features in a retro design. Inside the gorgeous wood box are most of the features now standard in tabletop radios: Bluetooth connectivity, access to streaming services, color display. But the $299 Model One Digital is lacking. Sure, it looks great, but suffers from a painful and dated user experience. I tried to talk to the radio, and it just sat there, ignoring me, like a tabletop top radio from 60 years ago.

Tivoli started out with the Model One in 2000. Henry Kloss designed the original and it has all the trademarks of his hand with large analog dials that, through a clever design, allowed users to precisely tune the radio without needing a ham radio merit badge. When locked onto a station, the Model One’s sound is full and warm. The Model One is still one of the best tabletop FM radios available. 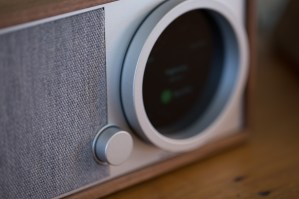 At first blush there’s a lot to like with the Model One Digital. Like the original Model One radio, the Digital looks great. This new model uses the Model One’s trademark large dials and the single speaker produces rich tones. The outside is encased in wood and the speaker is covered with fabric from a Danish fabric company.

Inside the large dial is a screen. But don’t believe the marketing images. The color screen is small and dim and the square screen is visible when the radio is on. It’s hard to see. Because of the low quality TFT screen, a direct viewing angle is required.

The dials, too, are missing the Tivoli charm. They’re loose and sloppy though feature different functions when moved side-to-side. The dials on the 17-year old Model One are solid and substantial. I want the same feeling in the new model.

The software is the main issue with the Model One Digital. It’s finicky bordering on unstable. The radio crashed on me several times. Here, look at this image. I was in the middle of taking pictures, did a software update, and the radio crashed. I reached out to the company, which told me to reset the unit by pressing and holding the two buttons on the back. That eventually reset the radio but only after 15 minutes of hoping and praying.

Unstable software aside, the radio’s software is slow to respond and a confusing mess. It takes about 15 seconds to turn the radio on and just listen to an FM station. To access the wifi streaming, the Tivoli app doesn’t handle the action. Users need to use the radio through Spotify’s app, which isn’t the end of the world but speaks to the larger issue. If the radio is in standby mode — where it’s just resting, displaying the clock — Spotify is not able to see the radio.

This is sadly not a radio that sits on a table and casually throws music on throughout the day. Once the radio kicks into standby, you have to turn it on to re-enable wifi streaming. 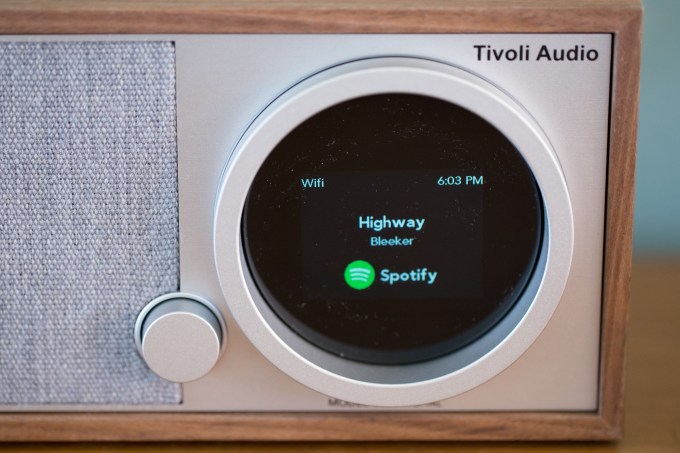 The Model One Digital sits in Tivoli’s Art line. The company is attempting to create a product line similar to Sonos with speakers and radios that can join together and fill a house with sound. There are several speakers available and they’re all made of the same wood and fabric casing. I didn’t get to try out this experience though the thought is dead-on if not a little behind the current trend line.

By no fault of its own, lacking voice control is one of the largest missing features on the radio. And I know that criticism is not fair. The company does not advertise voice control for any of its products, but it’s what I’ve come to expect from desktop speakers in early 2017. During my time with the Model One Digital, I had it set up next to my Echo because the Echo is already in the best spot of the room and I wanted to give the Model One Digital the best chance possible. Yet the Echo sounds nearly as good and it is much more enjoyable to use. The Model One Digital’s software just doesn’t make up for the lack of voice control. Even turning on the FM radio is an exercise in patience — and enjoying FM radio is what the Tivoli brand was built on.

In this era of moving past physical controls, requiring a user to use a screen, even in a retro revival product like the Model One Digital, is a losing strategy.

I wanted to love the Model One Digital like I loved the Model One. But I don’t. It looks great, it sounds great, but using the radio is frustrating because of the lackluster software and that goes against the core values of the original Tivoli Model One speaker.