“Hello, I’m John. I’m from M14 Industries and we are a dating company,” explained John Kershaw as he stepped onto the set of the BBC television show Dragons’ Den.

The Manchester-based startup was pitching its dating and social app-building platform for an investment of £80,000 for 15 percent equity.

Despite telling the cameras beforehand that he “might just be bricking it,” Kershaw went on to give a textbook pitch, resulting in something almost unprecedented on the show: all five Dragons wanted in.

The self-assured app entrepreneur appears to have an answer for everything. Dragons' Den

“I love it, you got me already,” gushed Deborah Meaden within a few minutes of the M14 founder’s opening gambit.

Peter Jones’ interest soon piqued after the telco entrepreneur figured out that M14 had already signed up Global, the operator of a number of the U.K.’s leading radio stations, as a customer.

Next up, Kershaw batted away a series of tough questions regarding the startup’s revenue and the potential size of the market for niche dating and social apps.

“The self-assured app entrepreneur appears to have an answer for everything,” the Dragons’ Den voice-over enthused. Then came the offers of investment.

“You’re very credible. I’ll make you an offer,” said Touker Suleyman, first out of the gate. Moonpig founder Nick Jenkins was next, followed by Sarah Willingham. “I would just like to go on this journey with you,” she confessed. Then it was Jones’ turn to put his cards on the table. And finally Deborah Meaden: “I’m going to make it really hard for you,” she warned.

After turning his back on the Dragons for a few minutes to deliberate, the M14 founder chose to accept a combined offer from Jenkins and Jones of £80,000 for 20 percent equity, giving the young startup a £400,000 pre-money valuation. “A thrilling finish for the app entrepreneur as he picks his perfect investment partners,” concluded the show’s voice-over, somewhat prematurely.

That’s because TechCrunch can reveal that the Dragons’ Den deal would eventually collapse. Told here for the first time, Kershaw picks up the story:

“Immediately after [the show] I’m whisked away by the production crew to a small room. I’m still in a bit of a daze. The production crew take me to go meet Peter and Nick, and film the ‘first encounter after the Den.’ We have a bit of an on-camera conversation, then get a chance for an off-camera chat… Everyone is keen to get the deal completed fast.”

Everyone is keen to get the deal completed fast. M14 Industries founder John Kershaw

The following day, the BBC passed the M14 Industries founder’s details onto Jenkins and Jones’ lawyers, and Kershaw doesn’t hear from the production crew again until months later when they call to fact check before broadcast.

“I get on a call with Nick a couple of weeks after the show (apparently that’s fast in Den terms) and we start chatting through how everything went, what the next steps are, and wanting to make sure everyone is still OK with things. At this point, we all are,” Kershaw recalls. 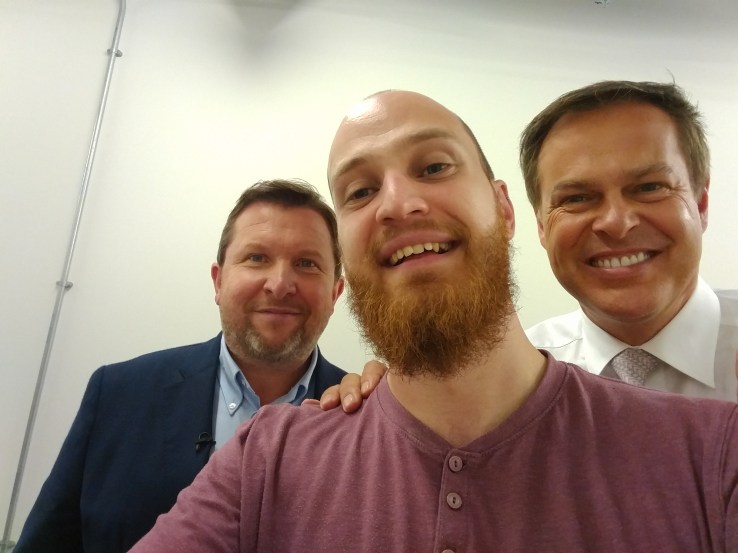 However, at around the same time, M14 was approached by one of its larger clients who, says its founder, had learned that the startup was preparing to take more investment and asked if they could be part of the deal.

To complicate things further, the unnamed client was willing to invest at a £1.5 million pre-valuation, up significantly from the Dragons’ Den £400,000 valuation (which also accounted for a number of advisory shares) and more than the £1 million pre-money valuation M14 had taken during a previous funding round.

“This presented something of a problem for us,” explains Kershaw, since it would require the Dragons to up their offer or take less equity. “On our next chat with Nick I bring this up. Nick knows his way around tech investments, and is happy for us. But, he says, it’s unlikely that Peter will be prepared to complete on a deal that’s so far removed from the deal we agreed in the Den. Which, frankly, is fair enough.”

In a follow-up call, Jenkins also pointed out that agreeing to 20 percent in the Den, then closing at 6 percent a few months later, would cause trouble down the line for the show, and possibly lead to people not taking future deals seriously in the Den.

“It’s at this point that Nick and Peter bow out of the deal, but we stay on positive terms. Our relationship with Nick leads us to meet and eventually buy [dating app] Double, who appeared on Dragon’s Den the previous series and got investment from Nick.”

In a final, and perhaps ironic, twist of fate, the unnamed investor would also go on to pull out of the deal in favour of simply remaining a customer. However, by this time, M14 Industries’ funding round of ~£100,000 had filled out nicely and Kershaw says it closed in early December.

Says Peter Jones in a statement: “Following the offer that Nick and I made to John Kershaw from M14 in the Den he contacted us to ask if the terms of the deal could be re-negotiated, we explained that was not possible and so unfortunately the deal did not complete. Both Nick and I wish John and the business all the best for the future.”