The all-new 2017 Land Rover Discovery — Disco to its friends — is packed from skid plates to sunroof with technology. Most of this tech falls into two segments: stuff most people will use all the time and stuff almost no one will use in their lifetimes. In the first category is the Activity Key that allows you to unlock the Discovery with a wristband; in the second, All-Terrain Progress Control for navigating outrageously difficult terrain at, like, 3 mph.

Let’s talk about the usable tech first. The Land Rover InControl Touch Pro infotainment system is a big improvement over Land Rover’s previous systems. It has a 10-inch horizontal screen that’s easy to scroll through, plus quick keys at the bottom, so you can always get back to the home screen. Its navigation system offers door-to-door routing, with directions from your parked Discovery to your destination on your smartphone. 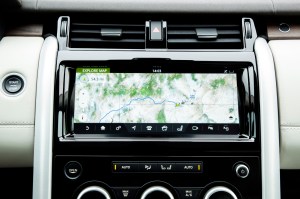 The system also has a Commute Mode that learns your usual routes. Once it understands how you get from home to work five mornings a week, it can suggest routes that circumvent traffic or accidents. And if you want, it can send messages to your coworkers to let them know what your arrival time will be.

The Discovery has ADAS features similar to many other luxury vehicles, including park assist, pedestrian detection and automatic cruise control. Also, like many other vehicles, you can unlock the Discovery from a smartwatch app. But the designers of the Discovery assume its buyers are an active, adventurous bunch. So they created the Activity Key, a rubbery strap for your wrist. You can leave your keys locked inside the Discovery at the trail head, do your Sunday long run in the woods and then unlock the Discovery when you get back by holding the band up to the “D” on the rear tailgate. Brought your dog with you on that long run? You can lower the rear suspension to make it easier for her to jump in the back.

Which brings us to the truly adventurous things the Discovery can do. It’s a Land Rover, so yeah, it’s got clearance for days and can drive through almost three feet of water. It’s got full-time four-wheel drive with low gearing for serious off-roading. The suspension can be raised and lowered more than two inches at the push of a button.

It also has All-Terrain Progress Control, which takes over the engine and braking functions at super slow speeds (1.2 mph to 19 mph). Press the ATPC button to set the speed, and you can concentrate on steering over boulders or down roller-coaster-grade inclines on sand dunes. Hill Descent Control and Gradient Release Control come in handy here, too. All but the most hardcore Discovery owners will ever need ATPC or anything like it, though they’ll likely be glad for the easy switch to different terrain modes for muddy unpaved roads or winter commutes that turn suddenly snowy.