Facebook finally has a Dislike button, but it’s not where you’d expect.

How do you reply to a specific message in a rapid-fire chat thread? Facebook wants you to attach emojis to your friends’ messages the same way you do with News Feed posts.

TechCrunch reader Hoan Do sent us a tip that Facebook Messenger is showing some users a Reactions option. When you hover over messages friends have sent in a chat thread, you can tap the emoji button to pick from attaching a little thumbs-up Like, thumbs-down Dislike, or a heart-eyes, lol, wow, sad, or angry emoji. Everyone in the thread will then see that Reaction counted below the specific message you attached it to, and you can tap to see a full list of who left which Reaction.

Facebook confirmed this new feature to TechCrunch, saying “We’re always testing ways to make Messenger more fun and engaging. This is a small test where we enable people to share an emoji that best represents their feelings on a message.” That means not everyone has access now, but if people enjoy it, Messenger Reactions could roll out to all users.

Notably, the Messenger reaction list differs from the News Feed one because of the addition of much-requested and always-denied Dislike button. Though it’s known as Facebook’s most asked for feature, the company didn’t want to inject too much negativity into the feed so it never built one. Instead, it built Reactions so people could share more nuanced emotions quickly, but left disliking for the comments.

Facebook sees it as more a “no” button, the company tells me. It says people often use Messenger for planning and coordination, and it’s experimenting to see if a reactions are helpful for quick logistics and voting. Thats why it’s offering a Yes/No option, even though people will naturally see it as a Dislike button too. 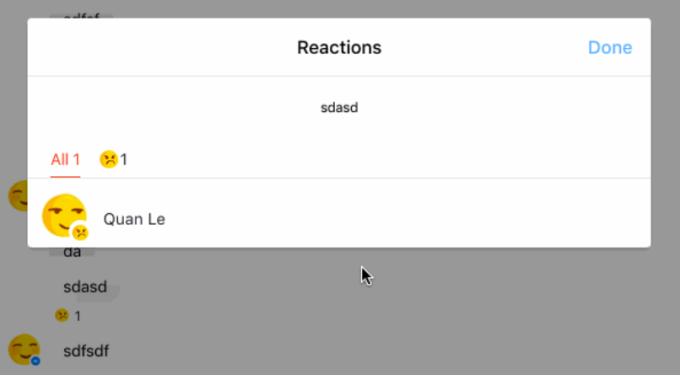 Messenger Reactions are similar to iMessage’s recently-added Tapback emoji, a format pioneered in the west by Slack’s Emoji Reactions. There they’ve proven especially useful in fast-flying group chats, where more messages may have come in before you can respond to one you’re interested in.

Boss – Everyone OK with ordering pizza for lunch?

Coworker 1 – Does anyone want to go to the food trucks instead?

Coworker 2 – I’m going to go for sushi if anyone would rather do that. 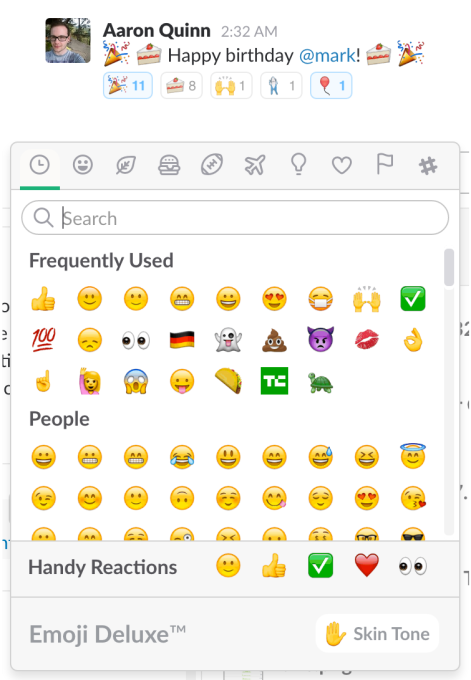 It’s totally ambiguous which message you’re responding to, and it’s annoying to have to say “Yes I want to go to the food trucks instead”. Before Slack finally added threaded conversations, it addressed this problem with Emoji Reactions. A lightweight social chat app like Messenger might not need threaded conversations, though it’s certainly a possibility, but porting over the News Feed Reactions makes perfect sense.

Facebook launched Reactions almost exactly a year ago, and they proven popular, with over 300 billion sent so far. “Love” is the most frequently used, making up more than half of all Reactions. Mexico, Chile, and Suriname see the most Reactions per user. And now, Facebook is weighting Reactions a little more heavily than standard Likes when it’s determining how interesting a post is and how prominently to show it in the News Feed.

Given the success of Emoji Reactions in Slack, the feature could make a strong addition to Work Chat, Facebook’s messaging system for its enterprise collaboration suite Workplace. It could also prove useful for interacting with chatbots, which Facebook also enhanced this week with persistent menus for when you don’t know what command to type.

The more convenient Facebook can make Messenger, the better it can compete with Snapchat, Line, and Google’s fragmented mess of messaging apps. Offering the easiest way to reply could keep users locked into the Facebook ecosystem, even if their social media sharing strays to other apps.