Scorp, a startup out of Turkey, offers another take on the social video theme. The app lets you upload 15-second videos on any topic, such as your view on Trump’s immigration controls. In fact, its young makers call Scorp the video answer to Reddit or Quora.

The app is starting to grow fast, too. But, unless you reside in its home country, or in Mexico, Brazil, India and a few Middle Eastern countries where the app is also finding an audience, it’s likely you’ve never heard of Scorp.

“We are a place for people with the same interest [to have] a conversation,” says Scorp’s 22-year-old co-founder and CEO Sercan Isik. “With the topic mechanism our community of content creators socialize, express themselves with a simple genuine video and they build up solid friendships.”

Although the app launched tentatively all the way back in February 2015, it has recently been picking up steam. In January, Scorp passed 3.5 million monthly active users and is seeing around 100,000 downloads daily. More than 1 million topics have been created and I’m told that on average a daily active user views more than 50 videos. Perhaps more impressive is that 14 people typically join each new conversation.

“The best way to get to know a person is to have conversations on a variety of topics. Even from [our] early days when we had 1,000 users in our beta group we saw content creators set a meet-up organically and they hug each other as [if] they were friends for years. It is because they met through a common interest via expressing their opinions,” says Isik. 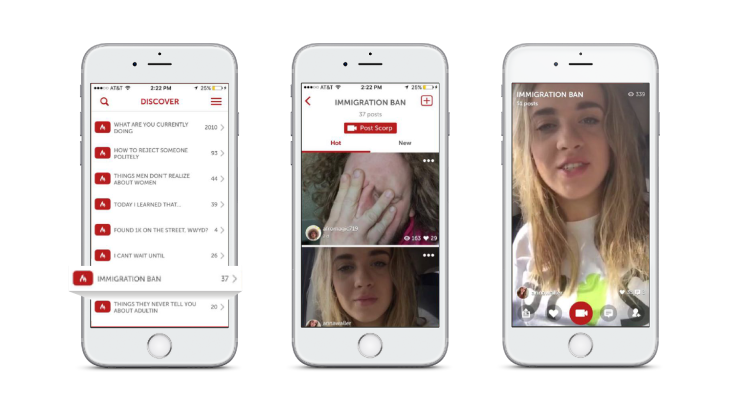 Perhaps unusually for a social video app, Isik and his co-founders Izzet Zakuto, Kaan Ugurlu and Ovunc Dalkiran — all of whom are under the age of 30 — reckon they’ve stumbled on a successful revenue model, having run a number of major brand campaigns via the app.

In one campaign, for the snack brand Doritos, Scorp asked, “What is the bravest thing you’ve done in the last 20 years?” The idea was to play into the theme that eating the new spicy Doritos is brave.

It had more than 6 million views, garnered in part because Scorp campaigns are seeded by a network of influencers it employs as content managers in each of the countries that it has launched, who in turn work with Scorp ambassadors on university campuses.

Campaigns are A/B tested, too, before they are given the full weight of the startup’s social presence. This extends beyond the Scorp app to include a lot of additional engagement on Facebook, Instagram and YouTube.

Then, of course, the conversation starts, typically seeing hundreds of users join the topic by creating their own video replies. If successful, it’s not long before the topic trends on Scorp, and the highlights turned into a two-minute compilation video, which is then signed off by the brand for more social sharing.

Isik argues that this sees Scorp solve three of the main problems that brands have when trying to engage on social: production costs are often high, there isn’t always an easy way to A/B test a campaign’s content and it is hard to reach a young demographic that responds better to a more innovative approach than traditional ads.

“User-generated viral video machine is the definition for Scorp Ads,” he says. “We convert the power of word of mouth into short selfie videos. Scorp seeds the message and motivates users to join the conversation on a brand’s topic with positive association or hype about the brand.”

Meanwhile, in my most recent call with Isik, I found him to be visiting the U.S., where, after a little prodding, he revealed he is meeting VCs to get a feel for where Scorp needs to be in order to attract further investor interest. The startup’s only funding to date comes from a number of Turkish angels, Koc University and German investor Carsten Maschmeyer.