Online banking service Simple today is launching a new type of banking product aimed at a younger generation of customers who want to be able to collaborate on finances with others, but aren’t in the market for traditional joint checking accounts, like those typically used by married spouses. The company’s new Shared bank accounts let customers control their own accounts from a single app, but also easily switch over to a shared account to do things like track combined expenses and transactions, set budgeting goals with others, track the shared account’s “safe to spend” balance, and more.

The idea, the company explains, is to offer a type of banking product for “every type of relationship from romantic to roommate.”

In other words, Shared accounts are for those people in your life who deserve a step up from Venmo, but aren’t necessarily a spouse, or even a partner. Of course, spouses – or anyone else – would be eligible to share this account with you, if you chose.

While Venmo is handy for splitting everyday expenses – like the check at lunch, or paying a friend back for a Lyft ride – Simple’s Shared accounts are meant for those who need to actually combine their finances in some way. Users can move money from their Shared account to their Simple personal account, and vice versa. They can also use the Shared account’s Goals feature to save money for known upcoming expenses, whether that’s regular expenses like the month’s bills or those you want to save up for, like vacations.

When transactions occur, both Shared account holders receive the push notifications on their phone. 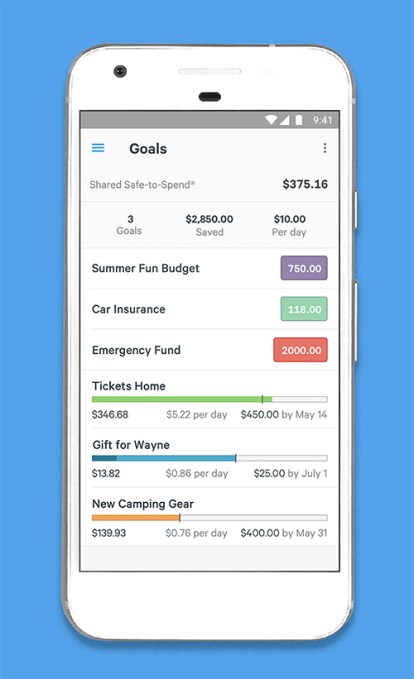 According to Simple, Shared accounts have been one of the company’s most-requested features since it first launched its online banking service.

Originally a startup aimed at taking on big banks by offering a more modern front-end to web and mobile banking, Simple was later acquired by BBVA back in 2014. Afterward, it struggled with upgrades, and was slow to roll out new functionality. But that has been more recently changing, with the launch of this new bank account, as well as various app updates, which have been thankfully glitch-free.

The company also recently forced its older customers with Bancorp-backed accounts to migrate to BBVA-backed accounts – a hassle, but one that will allow Simple to launch new features, including this new Simple Shared account.

Simple doesn’t detail its customers numbers, but said in September of last year that customer growth hit 50% in the first half of 2016. Also, last year, Simple grew by 120%, versus average growth for personal retail checking growth which is about 7% annually, it noted then.

Shared accounts were first introduced this past fall, but were only available in a limited beta, where users had to join a waitlist in order to request access. During the beta, customers complained it was difficult to tell with a glance which account they were viewing, so Simple has since revamped Shared accounts to give more visual cues about this, including both with wording and an aesthetic redesign.

Today, the new Shared accounts are available to anyone with a BBVA-backed Simple account.