Google and Comcast announced a new deal this morning that will see the YouTube application installed on Comcast’s Xfinity X1 set-top boxes nationwide later this year. The integration will allow X1 users to launch the app by saying “YouTube” into the X1 voice remote, as well as browse featured content on YouTube, search the entire library, including by voice, and sign into to access their own personalized YouTube settings and subscriptions.

Comcast says around half of its 22.5 million Xfinity customers have the newer X1 set-top box system, which includes a DVR with 500 GB of storage, voice remote, real-time sports scores, and other more modern features.

The cable provider had already added Netflix to its X1 devices last year – another significant milestone in terms of merging the online streaming world with traditional TV content. The deal saw Netflix content and Xfinity on Demand programming combined into a single library, to make switching between services more seamless.

Similarly, Comcast will integrate YouTube into the X1 in a unique way. Instead of being a standalone app to launch, as on other streaming boxes like Apple TV, Roku or Amazon Fire TV, for example, YouTube content is showcased directly in the X1 user interface alongside the shows provided by the cable service.

For example, if you’re browsing cooking shows, the X1 may display TV titles like “Top Chef” or “Cake Wars,” and then below will feature YouTube cooking shows and videos. (See screenshot). 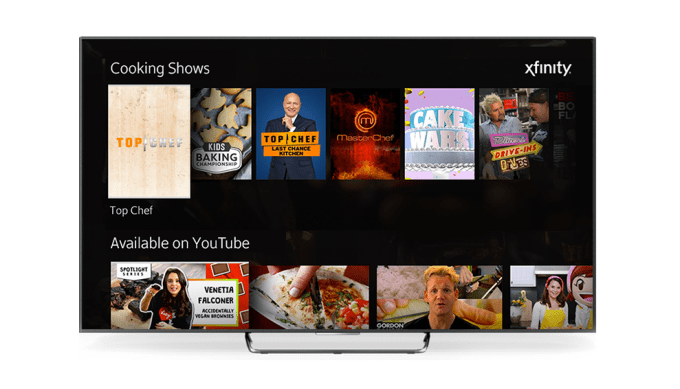 This seems like a more natural way to make YouTube content accessible to the TV’s big screen, instead of keeping it isolated as a standalone app.

After all, the YouTube Red subscription service on its own is not strong enough to warrant launching its app on a regular basis, and traditional cable TV viewers tend to be older than the young fans that favor YouTube stars over Hollywood actors. In other words, Comcast’s cable subscribers probably wouldn’t launch YouTube as often, if its library wasn’t promoted as this more integrated experience.

In addition, because YouTube’s app is designed to work with the X1 voice remote, there are a number of ways you can access YouTube content just by speaking. You can say things like “Show me Adam Levine clips from ‘The Voice’ on YouTube,“ or “YouTube, find ‘The LEGO Movie’ trailer,” the company suggests. Or you can use other keyword triggers like “launch” or “find” in order to pull up music videos, gaming videos, YouTube vlogger content, fitness videos, recipe demos, or anything else hosted on the video-sharing network.

The YouTube app is being announced today, but the integration is not actually launching until later this year, says Comcast, without giving exact timing.