Skype, the Microsoft-owned service that helped pioneer and popularize the rise of voice and video calls over the internet, is killing off one of the features that it added in later years to try to make the service more ubiquitous, especially among roaming users: on March 31, the company is killing off its WiFi service, which let users buy Wi-Fi access in paid public hotspots for a fee typically smaller than the one charged by the hotspot owner.

The company appears to have started to send out notices to users earlier today: 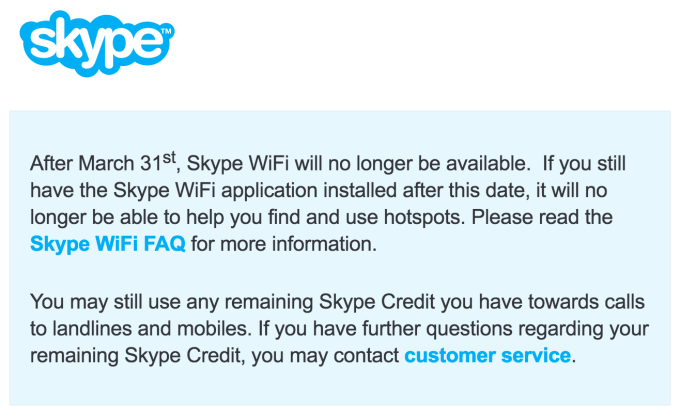 The page that it linked to explains that Skype is “retiring” globally so that the company can “better focus our efforts on bringing you the best possible experience through our core Skype features.” This is also the page that a Skype spokesperson pointed me to when I got in touch for any further comment.

Those core features today appear to be based around pushing things like the premium Skype for Business service; integrations with other Microsoft services; an app to rival Slack (that had been tipped originally as “Skype Teams” but eventually launched as Microsoft Teams); along with newer services like a bot developer platform to keep up with the Messenger Joneses, and a low-bandwidth version for developing markets. (But… still no two factor authentication or annoying spam bug fixes!)

This shouldn’t come as too much of a surprise. Originally called Skype Access and launched back in 2009, the idea was always to apply to wireless internet access the same principle that Skype applied to the world of calls and texts: offer the same service that the carriers offer, but for free or at a much cheaper price and with a smoother payment system. The service currently covers some 2 million hotspots globally.

But in more recent years, it feels like the Skype WiFi service had more or less gone to seed, running with little fanfare, and with no word on just how many people used it. It probably also didn’t help that in September last year, Microsoft closed Skype’s London office, its HQ and primary engineering site prior to the Microsoft acquisition, affecting 400 jobs. After a downsizing like that, you should expect some service closures and consolidation.

Alongside this, there has been a general shift in the market, too. Skype WiFi just isn’t as necessary as it might have been in the past. These days, if you are in your home country, you can tether your laptop to your phone if you need internet access somewhere and there isn’t free Wi-Fi; or on your phone, you can simply use mobile data, which is faster and cheaper than it was in the days when Skype WiFi was created.

After Microsoft acquired Skype in May 2011 for $8.5 billion in cash, the software giant mostly said that it would be business as usual with its new, and very popular, internet phone service. And early on, it even put some development attention into the WiFi product. The service was rebranded to Skype WiFi from Skype Access a few months after the Microsoft acquisition, and then iterated here and there, with some free access services added in at select locations.

Curiously, in 2015, it appeared that Microsoft was planning to launch its own cross-platform Wi-Fi service — but if you visit the page where it is allegedly supposed to be, all you get is a “coming soon” notice. Meanwhile, Microsoft does appear to have a Microsoft Wi-Fi app to search for and use paid public hotspots under one data plan, although it appears to be just for PCs running Windows.

For those who were users of Skype WiFi (I was one, in certain circumstances such as when I was roaming and couldn’t tether and didn’t want to pay some crazy fee for Wi-Fi access), the feature in the app will stop scanning for and using hotspots after March 31, and if you are a Skype user who bought credit to use for the WiFi service, you can use it toward other Skype services, such as calling non-Skype numbers.

If you don’t use Skype for making other kinds of calls and the only reason you had credit on your account was for Wi-Fi, you need to contact customer service to talk about credits (there is no explicit guarantee noted for refunds).