Hiatus, a New York-based startup that helps you identify (and potentially cancel) your monthly reoccurring subscriptions, has raised $1.2M in seed funding.

Founded in 2015, Hiatus first connects to your bank account and identifies your paid reoccurring subscriptions, some of which you may have forgotten you’re even paying for. Each month it will notify you before an auto-payment happens, and lets you easily slide to cancel via phone, email or directly on their website – depending on how the company requires you to cancel.

This feature isn’t necessarily unique – in fact there are lots of startups that also help identify and cancel your subscriptions, including ones like Trim and Truebill. So to differentiate themselves Hiatus is expanding into new service offerings to help you save money, with the first one being bill negotiation.

Launching today, Hiatus’ bill negotiation tool was built on the thesis that you’re probably paying too much for your monthly services. 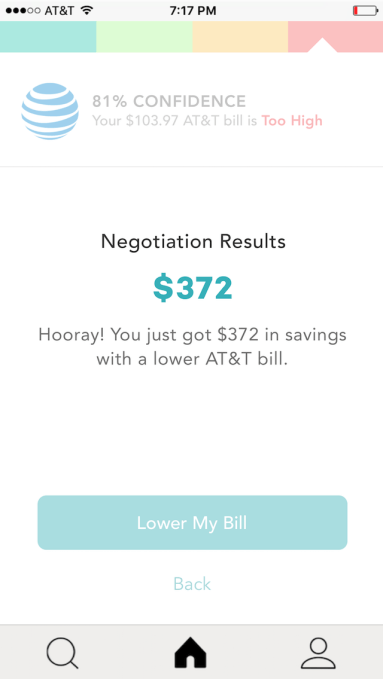 So after giving them permission to act on your behalf, Hiatus reaches out to companies and work to reduce your monthly payments – but let you keep the same plan with no reduction in service. For example, they’d never reduce the amount of channels on your Verizon subscription – they’d just persist until they got a lower price for your current plan.

In a 6-week beta period the tool has been successful for 93% of users, who will save an average of $137 per year.

For this service Hiatus will charge half of what you’re saving in the first year, which can either be paid upfront or in monthly installments as the savings are realized. So if you saved the average of $137 per year, you’d pay $68.50 to Hiatus. If they don’t reduce your bill you don’t have to pay anything.

In two years the company has analyzed $2.5B worth of transactions from users who have connected their bank account, and is now managing $50M worth of yearly subscriptions. This data has given them some interesting insights into subscription services. For example, the top 3 most canceled accounts are Ancestry, Experian and Tidal, 10.9% of Ancestry accounts are canceled after being shown to a Hiatus user.

Hiatus plans to use the funding to stock up on engineering talent and accelerate its Android launch, which should be ready in April. They also have some product enhancements in the pipeline, including the ability to pay for subscriptions and bills via their app, and other tools to let users make responsible financial decisions.