Skurt, the Los Angeles-based rental car delivery startup, has raised $10 million in Series A funding. The round was led by Upfront Ventures (which also led a $1.3 million seed round), and included a strategic investment from BMW, as well as funding from Troy Carter’s Cross Culture Ventures, Expansion VC, Greycroft and Magic Johnson.

Skurt has an interesting take on the rental car industry, on both the demand and supply side.

Customers request a rental on their phone and can have a car delivered to them within 60 minutes of booking. When they’re done, they set up a pick-up time and someone comes to get the car from wherever they are.

Renters only need to be 21, and more than 80 percent of Skurt’s customers are millennials. Unlimited miles are included with each rental; prices range from just $21 per day for a sedan to $59 per day for a luxury car.

Things are also interesting on the supply side. Skurt fills their inventory by partnering with fleet owners — anyone from auto manufacturers with excess inventory to dealerships or traditional car rental companies.

This model allows them to operate somewhere in-between an old-school car rental company and a peer-to-peer service like Turo or Getaround. They don’t have to own any inventory, but get to offer customers fleet vehicles instead of customer-owned vehicles.

This is a benefit because fleet vehicles are traditionally much more reliable than a random person’s car, due to the regular maintenance and check-ups they receive. Plus, all of the cars on Skurt are less than two years old, so you’re never stuck driving an old car that may break down.

Essentially, it’s like the difference of booking a place to stay on either Airbnb or Hotels.com. If you book a hotel, you’re almost always guaranteed to stay in a room that is up to the standards of a major hotel chain. But if you book an Airbnb, you have no idea what to expect — and even if it’s a good experience, at the end of the day, you’re still sleeping in someone else’s bed.

Skurt is currently operating in Los Angeles, San Diego and Miami on both iOS and Android, and has delivered “tens of thousands of cars.” While the company hasn’t named any specific cities, they say they plan to expand to “other major cities” across the U.S. during the next 12 months. 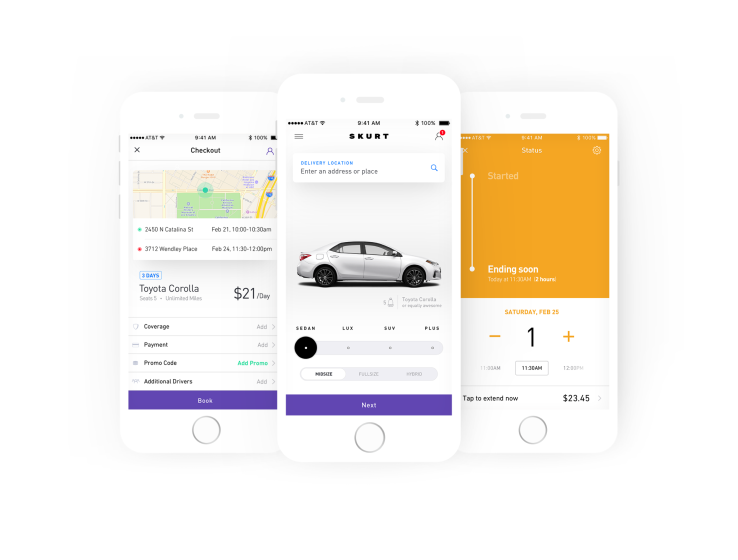