TheTake, a site which launched as a way for consumers to buy that thing they saw in that movie, is set to begin selling an automated version of its service directly to businesses.

The New York-based company is pitching studios and entertainment sites on a machine learning system that can identify products and locations as a way to generate revenue from product placements and experiential travel based on set locations.

The new product is based on a year’s worth of work that TheTake’s development did to train a proprietary machine learning algorithm to identify images using a different technique than the industry standard, according to TheTake’s chief executive Ty Cooper.

Initially, the team behind TheTake would manually enter all the datasets and use an off-the-shelf computer visualization tool to identify images that fit the pre-defined parameters set by the company’s staff.

Companies like Universal Pictures, Comcast, Bravo, E!, Fandango, Sony Pictures and the Hallmark Channel, are testing out the AI-based service now, according to an email from Cooper.

While TheTake will continue to operate its service for consumers, which Cooper said has roughly half-a-million monthly users, it’s focus will shift to the business-to-business version of the service.

“This network has broader use beyond the video world,” says Cooper. “This can be applied to and natural language processing.”

Cooper, a former MGM Studios sales employee who managed partnerships with various cable companies from the studio’s New York office, launched the company with the help of a whiz kid from Columbia, Jared Browarnik, and consumer products developer from IAC and Amazon, Vincent Crossley.

Customers shopping on the app or using its service have none other than Kanye West to thank for the service. Cooper was watching West’s performance at the Video Music Awards in 2010 and really wanted to buy the suit.

To date, the company has raised $2 million from investors including the film financing group Demarest Films, and former NBC Entertainment Co-Chairman and current Electus Chairman, Ben Silverman, among others. Halic, an investment group comprised of high net worth hedge fund investors, led the round.

Now anything from Christian Grey’s suit in 50 Shades Darker to Jyn Erso’s jacket from Star Wars Rogue One is up for grabs with a few clicks of a mouse. 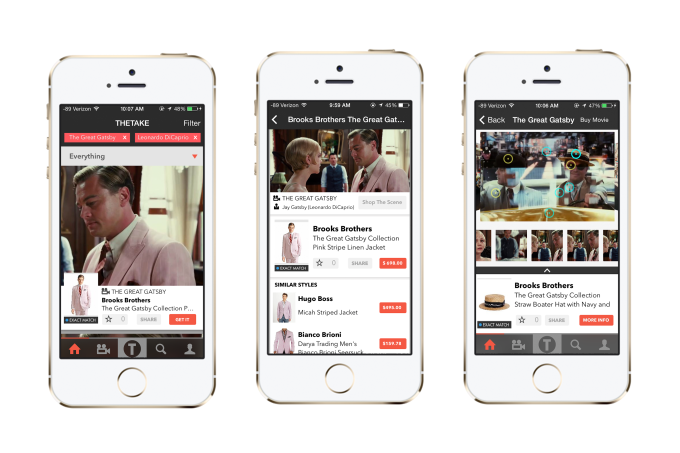