Another tech firm is raising its prices in the UK by up to 25 per cent following the June 2016 Brexit referendum vote which triggered a massive drop in the value of pound sterling.

Home audio kit maker Sonos is blaming “a significant change” in the exchange rate of dollars to pounds for making its existing pricing “unsustainable”.

By which it means this: 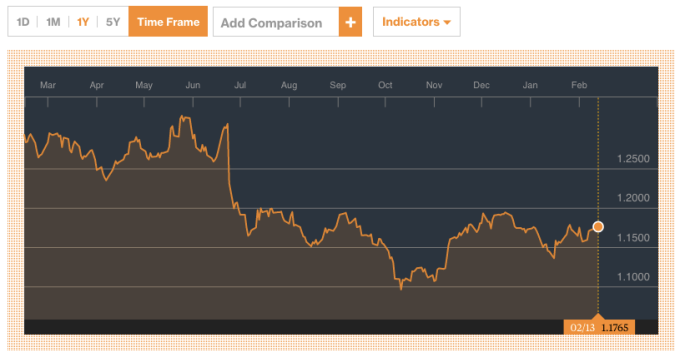 In a note about the local pricing change on its website, Sonos writes: “Our prices are defined regionally. In the UK, this includes local taxation and import duties, but we pay for everything we make in US dollars.

“Over recent months, there has been a significant change on the US Dollar to GBP exchange rate. As a result, our existing pricing has become unsustainable and, like many other companies, we have to increase prices for all products priced in GBP.”

The new Sonos UK pricing will come into effect on February 23.

It’s not a uniform 25 per cent hike — but certain products, such as the Sonos Connect:Amp and Playbar, are going to be a quarter more costly than they were, with £100 being added to their price-tags. (Sonos lists all product price changes here.)

The company is not alone in reworking its local pricing as a result of Brexit-triggered changes to the exchange rate of pound sterling.

Last month Apple raised the UK price of apps by 25 per cent — having already similarly dialed up its local pricing for Macs, back in October.

Microsoft has also inflated cloud product pricing for UK enterprise customers in the wake of the Brexit vote, with pricing up to 22 per cent more expensive since January.

While those seeking to escaping the dismal prospect of Brexit by stepping into HTC Vive’s virtual reality were among the first to have to stump up more cash; in August HTC slapped an extra £70 (aka a 10 per cent ‘Brexit tax’) to the local price of its VR headset, hard on the heels of sterling’s post-referendum slump.